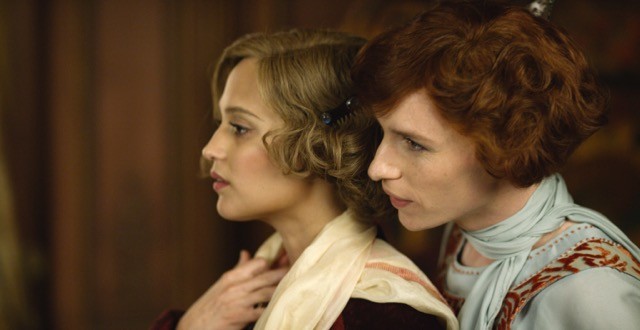 Actress Alicia Vikander talks about her role in The Danish Girl

There’s a rising star in Hollywood and this one is from Sweden. Alicia Vikander is quickly heading to super stardom with multiple movies opening this year.

She began her career in Sweden with the TV show Andra Avenyn before moving on to film work. She received a Golden Globe nomination for the popular science fiction thriller Ex Machina.

With a current movie that is already garnering Oscar buzz is The Danish Girl, which she stars in with actor Eddie Redmayne. She plays the wife of one of the first sex reassignment surgery recipients in history. Her role of Gerda Wegener stands out in this important tale base on the book by David Ebershoff.

Nunn flew to London to interview the actress face to face and learn more about The Danish Girl.

JN: (Jerry Nunn) Hi, Alicia. First off, being from Sweden are you a Robyn fan?

AV: (Alicia Vikander) Oh, I met her just a few weeks ago at a party. The thing is she came up to me and introduced herself. I told her that she doesn’t remember but we have met four times through friends. I have looked up to her so much. She has been one of my idols and she came up to say to me. It was so strange because before that it had always been me wanting to meet her before that.

JN: You originally studied ballet. Did you fall into acting?

AV: I don’t think I fell into it at all. It is a passion that I have. I love theater and film. I liked it at a young age and my mum is an actress. I did some film and TV work when I was teenager. I started to do films in my native country when I was around 18 years old. That was when I quit ballet. That was a tough change for me.

I didn’t know acting would be my thing. I tried out for acting school twice. I went through two rounds but did not get in. I got into law school so I thought that was what I was going to do. Then I got the chance to audition for a Swedish film. After that I was able to see if I could continue with acting.

JN: Well, I am glad you did because you blew me away with this role. Talk about playing Gerda Wegener in The Danish Girl.

AV: It was endless material to prep for this film. It was a big challenge because I had heard about Lili’s story. When I was introduced to the role of Gerda I discovered that above everything this was an extreme love story. We went back to get to know as much as we could about the couple and them as real people. We had the book that was based on them. I also have met a lot of people who are friends, partners or loved ones to people that have transitioned. We had such generosity from people in the community who opened up about their personal stories and experience. That was humbling to me how they opened up.

JN: I spoke to Eddie Redmayne about how much he learned from this project.

AV: It was eye opening for all of us and educational in a very strong way.

JN: How did you tap into the emotions of your character?

AV: It was nerve wracking because it felt like such an important story to tell. Above anything I wanted to do justice to it. It involved quite an emotional journey. It had to be true and had to be there. I couldn’t have done it without Tom Hooper who was there from the first reading. That was when I didn’t have the job and was terrified.

JN: How were you cast in the part?

AV: We all came in to the casting situation with Eddie, Tom, and a little camera. They had me sit down and just talk to them. That is a very rare casting experience. I guess they wanted to create an environment and a safe place where I could try things. Even in a casting experience I would be able to try something new. It is wonderful when a director gives you this kind of opportunity. I hadn’t met him before.

Eddie and I had presented an award at an event two months before the reading not knowing that we would do this reading a few months later. We had a few friends in common and we have become dear friends now. You have met him so you know what I am talking about.

AV: I felt so safe during that audition and I was amongst friends. After that I knew that I got the role and was able to see what he did with Lili. It was all about that relationship. Eddie pushed me and made me go farther. I knew I had to step it up.

JN: You did. Did you like wearing the clothes from that time period?

AV: I loved how we traveled between worlds. We are first in simple Copenhagen then when her career takes off we go to extravagant Paris. The 1920’s fashion was so experimental in that sense. It felt ravishing and daring for that time. We had to know that was part of who those two women really were. They were ahead of their time.

JN: They were from the artist community. You have many films coming out this year, correct?

AV: I think several are coming out next year now.

JN: How was Burnt with Bradley Moore?

AV: I am looking forward to seeing it. I had finished a film and was going out to New Zealand to film a movie called The Light Between Oceans. I had a week then had a call from John Wells, the director. I hadn’t read the script and I am a big foodie. I loved it after reading it and he wrote in a little part for me. It was a small cameo but the nicest little gift to come in and see Sienna Miller and do two scenes with Bradley. I felt like a guest invited to a nice dinner. It was a pleasure to join for a day.

JN: Bradley is hot. You were in a witch movie called The Seventh Son with Julianne Moore?

AV: That was my first movie four years ago but it came out this year. This is how studios work with releasing movies. It was a big experience for me because it was the first American film that I got. In the end I wound up shooting Anna Karenina shortly before that.

I will always remember how Julianne Moore was so supportive. Every morning she would come in with a cup of coffee and sit down about the few scenes that I had with her in that film. That was a big experience with tremendous actors. She is such an incredible mother and friend.

JN: You are making a Bourne film?

AV: Yes, I am filming it this weekend.

JN: You must be overwhelmed with everything.

AV: I am but very excited to go back to work tomorrow!

The Danish Girl opens in Chicago on December 11 and at more theaters on Christmas Day.