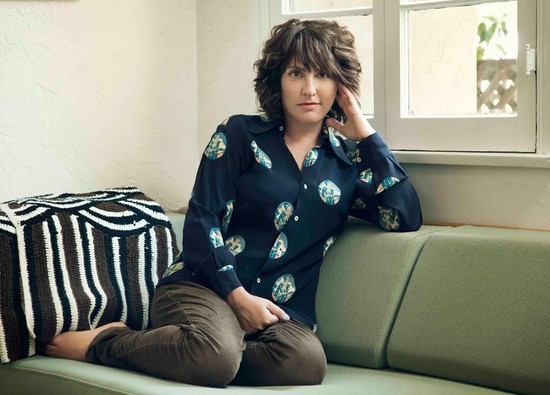 Afternoon Delight (Cinedigm/The Film Arcade), Chicago native Jill Soloway's award winning feature film debut, is a delight any time of day. The story of complacent but bored domestic goddess and mother Rachel (Kathryn Hahn effortlessly stepping into a lead role), her shaky marriage to Jeff (Josh Radnor), her unfulfilling therapy appointments with Lenore (Jane Lynch) and dull female friendships, and how they are transformed after a visit to a strip club. It is at the strip club where Rachel meets stripper McKenna (Juno Temple giving the best performance of her career), an encounter that will forever change both women as Rachel makes saving McKenna her mission.

As Soloway puts it, the film "treads in some dangerous territory," that the "idea of the sex worker in need of rescue is only a few steps away from the idea of a queer person in need of rehabilitation." In terms of the palatable sexual attraction between the two women, Soloway says that it is a "strand" of the story and that "Rachel revolves through the poles of wanting to rescue McKenna, wanting to be McKenna and wanting to have sex with McKenna." I spoke in depth with Soloway about the film shortly before it opened in theaters during the summer of 2013.

GS: (Gregg Shapiro) Being a part of a creative family, including your mother writer Elaine and singer/songwriter sister Faith, did you always want to be in a creative field?

JS: (Jill Soloway) Yes. I think when I was a kid we were all staring at the television all day. So my thought was, "get inside that television." [Laughs] Maybe so I could be the center of attention, I'm not sure about that. But I definitely wanted to be on the other side of the screen.

GS: What does it mean to you to have won the directing award at Sundance for your first full-length feature film Afternoon Delight?

JS: It's so exciting. For me, the victory feels like a victory for feminism in comedy. Simply to make a movie about real women and what it means to be a woman today. It also has some deep dark stuff and some great sexy stuff and it achieves its goals as a comedy. To pull all that off, to me it feels like the meaning of the award for me.

GS: I'm really glad you mentioned that because I was thinking about some of my favorite contemporary female filmmakers such as Nicole Holofcener and Lisa Cholodenko, and I think it would be fair to say that with Afternoon Delight you take your rightful place alongside them….

GS: Good observation! Are they filmmakers whose work you admire?

JS: Of course! Aside from the three of us all having "olo" in our names, we're all women, we're all Jewish women. I admire and love both of them. They are both amazing women. I met Lisa Cholodenko when she was a guest director on Six Feet Under and she's been incredibly supportive. They've both been incredibly supportive to me. There's a real network of women directors out here in Los Angeles were always reaching a hand out to each other and helping and bringing each other along. They've been great to me.

GS: How does working on a feature film compare with the cable series work you've done?

JS: I honestly, at this point, am starting to feel like all content is content. I'm getting into the business of original content. I'm writing a pilot for Amazon. I look at something like Top of the Lake, where at Sundance a lot of the filmmakers were going, "how does Jane Campion have a six-hour movie?" Then we get home and (find out) it's her new TV series. Then you combine that with how a lot of filmmakers are trying to figure out how to get to their audiences. The way independent film is making it to audiences is through iTunes, through Netflix. So if a large percentage of the content is ultimately being received through your home television or home computer, and independent film is alive and well for those who like to go see independent films, to me there really isn't that big of a difference. What does it mean to have the communal experience of sitting in a theater watching movies with other people? I think Afternoon Delight, in some ways, invites the communal experience. I imagine that mom is will drop their kids off at school and go and sneak and see this movie in the middle of the day with each other. Instead of the girls night out, it's a moms afternoon out. They can see the movie and get salads afterwards and talk about it.

GS: Afternoon Delight has a very distinctive opening titles sequence in which Rachel (Kathryn Hahn) proceeds to change seats in the car while alone in a drive-thru car wash. It's a very quirky kind of move – do you know someone who does that?

JS: Absolutely! Right before we were trying to figure out the opening of the film, I was in a car wash with my son. I have a four-year-old. We were looking at the glass and taking pictures of the soap on the glass. I thought it would be an amazing opening image. My son and I did that -- the van was on autopilot and I thought let's go get in the back seat and see what happens. I definitely know somebody who did that.

JS: There's a lot of me in her. I never have brought a stripper home. But I definitely have gotten confused during lap dances where I thought that the stripper wanted me to get her out of there [laughs]. I've gotten a couple of lap dances in my life and have often had that feeling where, "Wow, we have a special connection. I see her unlike any of these other people in here see her."

GS: Afternoon Delight is also a commentary on boredom and what a person can be driven to do spice up their life, including inviting a stripper to live in their home. What are some things that you do to alleviate boredom?

JS: In some ways I feel like movies are my McKenna. There was a time where when we were making the film and I was running off from my family to be on the set of Afternoon Delight where I felt like Rachel hiding out with McKenna. The creative impulse that Rachel blamed – "I'm going to bring McKenna home and we're going to blog together. Let's do a podcast." – that's the same exact impulse I have making films and making television. I want to matter, I want to make things that matter. I want to lose myself when I'm creating. The urge toward a secret life is very similar to the urge toward a creative life.

GS: Jill, you have consistently included queer characters in your work, including Afternoon Delight in which out actress Jane Lynch plays lesbian therapist Lenore.

JS: I feel like I come from a queer family. I feel like I am a queer artist, like I've always been sort of queer adjacent. This movie was work shopped at a queer artists retreat called Radar LAB run by Michelle Tea from San Francisco who is an inspiration to me. McKenna was inspired by a woman named Lorelei Lee that I met at that artists retreat. Antonia Crane is a sex worker that I met while I was performing in Michelle Tea's Sister Spit (troupe). So sex workers, feminism, queer art are all alive in the same space for me. In some ways, I feel like it's my work to be a translator between the queer world and the straight world.

GS: Did you first meet Jane when you worked on The Real Live Brady Bunch?

JS: Yes, we were all part of the same theater company. Jane was Carol Brady in The Real Live Brady Bunch.

She was just our friend who looked like Carol Brady.

GS: Jane plays a therapist in Afternoon Delight, as well as on Two and A Half Men, and in the upcoming A.C.O.D. Why do you think she continues to be cast as a therapist?

JS: [Laughs] She's very funny and authoritarian. She really gets that comedy of taking yourself too seriously. Also, she's tall, so she makes a really good authority figure.

GS: Afternoon Delight also has a strong Jewish quotient. How were you raised?

JS: We were raised culturally Jewish, but not in any way specifically religious or spiritual. (Now) I'm not really an observant Jew. I'm kind of interested in reinventing Jewish culture a little bit and doing some sort of community organizing with some sort of Jewy revinenty groups. But, no, I had bacon this morning [laughs].