Paris, She Said: an interview with Christine Sneed

I spend time with creative people whose sexual orientation is different from my own. 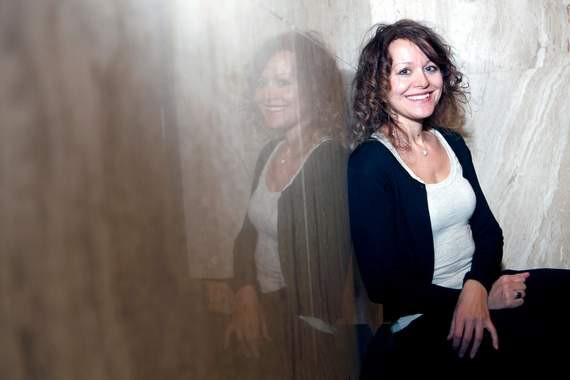 If you are looking for a new favorite author you need look no further than Christine Sneed. You could work your way backwards, beginning with her wonderful new novel Paris, He Said (Bloomsbury, 2015). In Paris, He Said, Sneed takes us to the City of Lights where young, American artist Jayne has relocated to be with her older lover Laurent, an arts patron and gallery owner who has exhibit spaces in Paris and New York. The novel balances artistic expression with romantic intrigue and is a pleasure to read. Sneed’s previous novel, 2013’s Little Known Facts, deals with “the perks of celebrity” and “the fallout of fame and fortune,” and her 2010 short story collection Portraits of a Few of the People I’ve Made Cry won the Grace Paley Prize for Short Fiction. I spoke with Christine Sneed, who divides her time between Evanston and Champaign/Urbana shortly before the May 2015 publication of Paris, He Said. [The book release party for Sneed’s new novel, Paris, He Said, is on May 7 at Women and Children First Bookstore, 5233 N. Clark, 7:30 p.m. On May 16 Sneed is doing a reading with writer/filmmaker/actor Julia Sweeney at Bookends & Beginnings, 1720 Sherman in Evanston, at 6 p.m. Sneed reads with Rebecca Makkai and Christina Clancy at  The Book Cellar, 4736 N. Lincoln, at 7 p.m. on June 6 and is back at Bookends & Beginnings in Evanston on July 16 at  6 p.m. with painter Susan Kraut.]

Gregg Shapiro: Christine, when I interviewed you in the fall of 2013, you had just returned from Paris. At that point, were you just beginning or finishing your new book, Paris, He Said?

Christine Sneed:  I was nearing the end of the first draft.  I still had about sixty or seventy pages left to write, and at the time I didn’t know that I would rewrite about 90-95% of this first draft.  Thank goodness I didn’t [laughs], I’m not sure how I would have felt about it.

GS: Your first novel, Little Known Facts, featured movies and actors, and your new novel, Paris, He Said, features visual art and artists. Can you please say something about your interest in writing about creative people?

CS:  I’m curious about what compels other people to do creative work.  I know my reasons for doing so – it’s a compulsion, in part – I love it and I can’t imagine not doing it.  Having a number of friends who are artists, and having worked at the School of the Art Institute (SAIC) for the five years directly following graduate school, I wanted to write about art-making.  I think we all have very personal relationships with art too, whether it’s with a film, a painting, a sculpture, a song, or a book.  The connectedness that we feel with someone who has created something beautiful – this is one of the joys of being alive, and this is a feeling that I am trying to write about too.

GS: Carol Anshaw, another locally-based novelist, is an example of a novelist who is also a painter. In addition to writing, do you also paint?

CS: No, but I lived for five years with a man who is a painter and a sculptor; we met when I was working at SAIC and he was finishing his fine arts degree there.  His studio (our second bedroom) was almost always an exciting place to be.  It was also very messy, not surprisingly; a lot always going on in there.  As a writer, it was inspiring to be near his work space too.

GS: Did you know when you first started writing Paris, He Said that it would be told, alternately in third person and in the first-person voices of Laurent and Jayne?

CS:  I didn’t know, in fact.  This was something I realized that I wanted to do as I was rewriting the first draft.

GS: Jayne expresses concern over issues brought about by climate change and overpopulation. Do you share her concerns?

GS: Early in the first section of the book, you describe the parting of Jayne and her ex-boyfriend Colin in such a way that it felt as if you'd lived through something similarly agonizing. Did this scene come from an experience of your own?

CS:  No, not really…well, maybe yes.  A long time ago -- almost twenty years now, goodness -- I dated a Frenchman who lived in Chicago for a year, and when he moved back to Paris, it was hard to say goodbye to him.  I visited him a few months after he moved back to France, and having to say goodbye again, this was also hard.  But I wasn’t thinking about specifically him as I wrote that scene with Jayne and Colin – I was thinking of all the partings that I’d seen in good films and mainly imagining the emotions these leave-takings can engender – sadness, worry, fear, love.

GS: At the same time I was reading Paris, He Said, I was sent copies of sculptor Grayson Perry’s Playing To The Gallery, as well as Brad Gooch’s memoir Smash Cut and Kim Gordon’s memoir Girl In A Band, in which the downtown NY art world of the `70s and `80s figures prominently in both books. Does this qualify as a trend and why do you think art has become a popular subject for writers now?

CS:  I think it’s probably always been a popular subject, for both fiction and nonfiction writers.  For example, not long ago, Girl with a Pearl Earring was an enormous success, and people continue to read and discuss Vincent Van Gogh’s letters to his brother.  I know there are countless other examples.  And of course films are often made about artists’ lives (Ed Harris’s Pollock, which was excellent).  Artists are interesting subjects – besides having brilliant minds, they often lead exciting, passionate, often self-destructive lives.  Much drama, needless to say [laughs].

GS: In one of the chapters, there is a list with titles of Jayne's paintings in a dream exhibition. What can you tell me about the process of coming up with those fictional names?

CS:  I’m not sure how I came up with them, but I like thinking of titles – it’s one of my favorite things to do when I’m working on something new, along with writing dialogue.  I try to choose strong nouns, something concrete rather than abstract, when I title a manuscript (or in this case, a painting).

CS: One thing that’s easier about a book signing is that few people have read the book before your reading/signing.  If they read the book, and if they don’t like it, you often won’t know it.  But a gallery opening puts an artist in a more vulnerable position – all the work is there in front of the gallery goers; it’s probably not too hard to tell how people are responding to it if you’re the artist whose work is on exhibition.

CS:  I have a number of friends, writers and artists among them, who are gay, and as I was creating Jayne’s life on the page, I was trying to reflect some of the relationships that I thought she would have in a city like New York, for example – college friends, family, other artists who aren’t heterosexual.  My own life in Chicago is like hers, to some extent; I spend time with creative people whose sexual orientation is different from my own.

S: Near the end of the book, you write about some of the things that Jayne’s teacher said to her when she was a student. Did you have a writing teacher whose words had a similar impact on you that Susan’s had on Jayne?

CS:  I had some really generous writing professors at Indiana University where I got an MFA, and at Georgetown as an undergraduate, but I don’t remember any specific conversations – they were encouraging though.  I was also a poetry MFA student, and I wasn’t showing my professors much of the fiction I was writing at the time. Thank God, it was pretty rough [laughs].

GS: Have you started thinking about your next book project?

CS: Yes, I’m working on a novel right now about a couple getting ready for their wedding – some dramatic tension between them and their families; there are a number of comic possibilities related to this topic that I’m hoping to explore.