Some Kim Chi for breakfast is not going to be bad! 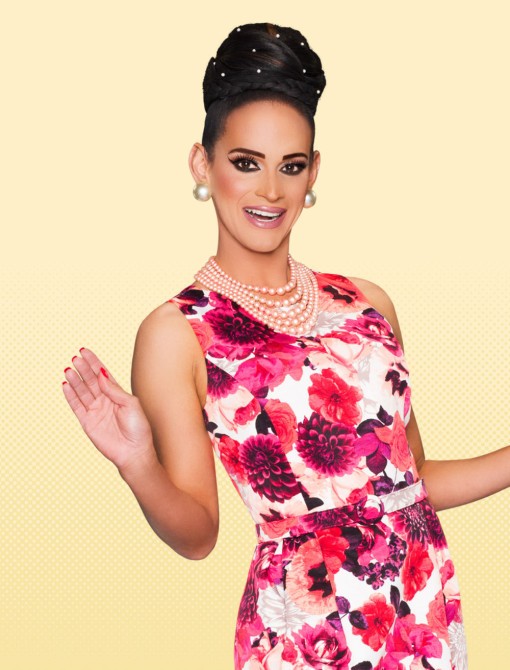 Straight from the heart of Texas Cynthia Lee Fontaine arrived for the eighth season of RuPaul's Drag Race on the Logo Channel. The Puerto Rican with a sunny attitude was a breathe of fresh air in the usually competitive reality show. While a bit spicy she was known for helping her fellow contestants while making lots of jokes.

We went cuckoo for her cucu but it couldn't save her red roller skating outfit in the end.

We talked to her briefly on the red carpet before the show aired.

CLF: (Cynthia Lee Fontaine) A fine one too, lady. I will tell you later...oops, I'm sorry, I'm dating. This apartment complex has a landlord! Let's see if we have a contract that is iron tight.

JN: How did you get from Puerto Rico to Texas?

CLF: Well, I have my mom and my stepfather, two aunts, and seven of my cousins that live there. A part of my family is in the military. I was working in Puerto Rico in a medical records department for a hospital. I was in a contract. I had maybe six months to a year and a half to do that. After that I decided to tour Texas. There are amazing performers there. There are great opportunities for jobs. I thought, "Let's do it and work. Let's do something good."

JN: And look where you landed.

CLF: Oh my god, right? It was a crazy but bumpy ride at the same time.

JN: I bet. Were there any hot boys when they took off the drag on Drag Race?

CLF: Oh yes. I think all of the guys are sexy and exotic. Derrick Barry is especially sexy. I like beefy football players so Kim Chi is hot as a boy. Some Kim Chi for breakfast is not going to be bad! Also, Naysha Lopez is my Puerto Rican sister but as a boy gorgeous too. I think each of them but I like everyone.

JN: Great. What is your favorite Puerto Rican food?

CLF: Rice (arroz), grandules, green beans, pasteles, that is the same as tamales but the difference is instead of corn it is made with plantains. Then tostones, that is fried plantains. Hay dios mio, I'm starving right now! Thank you for talking about food.

JN: Maybe we can't eat but we can talk about it. Did you have a special moment from RuPaul's Drag Race?

CLF: To be very honest with you the first time was when I went in the work room. The second time was when I saw RuPaul at the top of the stairs saying, "Hello, hello, hellooo!" That was amazing because I finally got the opportunity to meet RuPaul. He was an inspiration to me over the years for my sexual identity, my look, and life. I learned perspective about my goals in life and the future from RuPaul. I was on TV again after being on it in Puerto Rico. This time it was in drag and I took my character to another level. It was fantastic.

JN: I wish you the best on the race.

CLF: Thank you. It will be crazy but amazing. Get a pillow, some pinot grigio, and relax because it is a crazy season!