Flexible Steele: an interview with singer and songwriter Anne Steele

Quite frankly, my main audience is gay men. I don’t know that being a lesbian plays to that in any way. 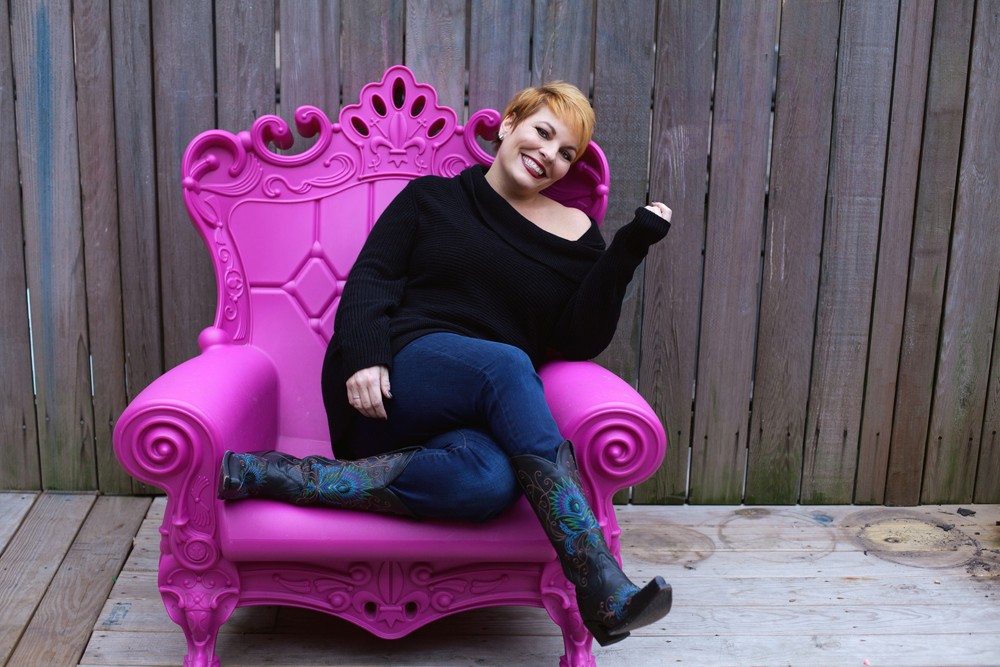 Out singer Anne Steele shakes things up at the cabaret, old chum

Anne Steele wants you to come to the cabaret, old chum. But don’t expect the usual Kander & Ebb, Jerry Herman, Stephen Schwartz and Cole Porter content in the out artist’s set. Steele is intent on shaking things up in the cabaret scene, as she did with her award-winning show (and accompanying studio album) “Strings Attached.” Her new EP, What’s Mine (Steele Records) expands on that energy with the queer anthem “Don’t Tell Us How To Love,” the irresistible dance track “Without You Tonight” and raucous rocker “Worst I Ever Had.” I spoke with Steele about the new EP and her career in April 2015. [Steele performs on May 15 & 17 in Chicago at Davenport’s Cabaret.]

Gregg Shapiro: Anne, you are the recipient of many awards for your singing, including MACs (Manhattan Association of Cabaret and Clubs Award), and Bistro and Nightlife Awards, among others. Do you have a special place of honor where they are displayed?

Anne Steele: No, they’re just in our office. We moved into a new house a year ago. We had shelves put up in our office. The awards are up there with our family pictures and stuff like that, mixed in there.

GS: Those awards are a reflection of your roots in the cabaret scene. How did you first discover the world of cabaret?

AS: When I first moved to New York, I got a job at a piano bar, Don’t Tell Mama. I earned my chops singing in the piano bar for years. It was sort of a natural progression to go into cabaret from there. There are two cabaret rooms at Mama’s. It was something people did to develop their own voice in music. To be completely honest, I was never fond of the cabaret title. I always found myself to be different from the average cabaret artist. Cabaret has changed a lot. Especially now; the downtown scene in New York is really different and edgy and cool. Cabaret has grown a lot in a lot of different ways. When I first started there was a certain demographic that went to cabaret shows, certain people performed in cabaret. It was all very cookie-cutter, in my opinion. I have never been a very cookie-cutter kind of person. I went into cabaret because I wanted to write my own show and I wanted to sing pop music, basically. At that time, piano bar was very traditional, Broadway and standards. I got to go into the cabaret room and sing pop music. The first show I ever did, I opened with Janet Jackson song. [Laughs] I definitely wanted to shake it up a little bit. Now I play at Joe’s Pub and places downtown that are a little more progressive in the cabaret community.

GS: Would you agree that that change has occurred because it’s a younger generation of performers coming up in cabaret, bringing their musical tastes to the scene?

AS: I would say so; generationally, for sure. But I think the audience has also opened up. When I used to go to cabaret, it used to be a lot of older people. It wasn’t a young thing at all. I’m kind of obsessed with Bridget Everett – she’s amazing! She’s riding the line between burlesque and cabaret. Her audiences are so diverse and hip and young. That to me is a dream audience where you can appeal to all kinds of people and all age groups and musical styles.

GS: The cabaret world is bursting at the seams with gay men, with a smattering of lesbians. In what ways has that worked to your advantage?

AS: Sharon McKnight is really the only lesbian I remember being in cabaret. She was so specific with what she does. I’ve always been out, but I’ve never defined myself as a lesbian singer. It was just sort of part of it, but it didn’t define me in some large way. Quite frankly, my main audience is gay men. I don’t know that being a lesbian plays to that in any way [laughs].

GS: So chances are there won’t be a cabaret evening at the Michigan Women’s Music Festival.

AS: [Laughs] certainly not. People always ask me, “Do you play the Olivia Cruises or go to women’s events?” I’m like, “No, not really” [laughs]. Not that I wouldn’t. I’m a lesbian. I have lots of lesbian friends. I hate to pigeonhole the scene, but it’s really not the scene for it. My audiences are usually gay men and straight people, frankly. It’s just how it sort of happened.

GS: Five years have passed between the release of your first album Strings Attached, which featured a fascinating assortment of cover material, from standards by Stephen Sondheim and Charlie Chaplin to more contemporary fare made famous by P!nk, Lady Gaga and Sara Bareilles, and your new EP What’s Mine. What was keeping you busy during that time?

AS: Five years ago, when that first came out, that was a huge undertaking for me. That was from my show that got most of the attention. A lot of the awards I received came from that show. That is when I made my jump from the Metropolitan Room, which was the midlevel cabaret space I was playing after Don’t Tell Mama, down to Joe’s Pub. The first time I ever played Joe’s Pub was the CD release for Strings Attached. That was a huge transition for me. It was also the beginning of my relationship with my now wife (Kelli Carpenter). Things shifted for me. I got booked places. I got to pick and choose what I wanted instead of having to scratch and claw a little bit. I got to say I wanted to play Joe’s Pub three times a year and they were like, “Sweet! Let’s do it.” It felt a little more relaxed. About a year after Kelli and I started dating, I moved to the suburbs. Then I had children in my life because she has kids. That was a shift and a change. Now I’m a stepmother to four children [laughs].

GS: There is an audible difference in the musical styles of What’s Mine and Strings Attached. What brought that about?

AS: When I did Strings Attached, I was trying to figure out how to make the pop music that I loved to sing palatable for the cabaret community. I was trying to find a way to get them to listen to Britney Spears’ “Toxic” and not be so offended by it [laughs]. I thought, “What if I do it with string arrangements? They’re not going to know it’s Britney Spears. I can recreate it and do it in my own way. Hopefully they’re going to love it.” Even in the show, I did a Britney Spears song straight into a Sondheim song. To me, that was a brilliant juxtaposition and something that was hilarious in my brain. They just thought it was fantastic. That is why I went that route in that show. Then (record label) PS Classics came to me and we released the album. What I really wanted to do all along is what I’m doing now. I was waiting to get into a place where I have enough of a following and I’m strong enough on my own that I can release whatever I want. Not have to play to any particular audience. To me, that is this. It is every bit of who I am in a record.

GS: There are two original songs, “Worst I Ever Had” and the title cut, co-written by you on What’s Mine. What was your role in the songwriting process?

AS: My amazing producer Erik James and I have been friends for a long time. We came up in piano bars together. He’s a brilliant pianist and singer and all-around musician. He’s also a producer. I went to him and said, “I really want to write. I’ve never written before. I don’t write music. I just write in my journals.” He said, “Grab your journals and let’s start going through them.” We went through them and pulled and lines and tried to figure out in what direction we wanted to go. We wrote four or five songs that we then threw away [laughs]. Then we started writing “Worst I Ever Had” and it was writing itself. A little close to home from the past, but it was coming very easily. He wrote the music. He’s fantastic at writing music to my lyrics. For “What’s Mine,” I was watching a TV show about songwriting. I had been struggling and my wife suggested we watch, that maybe it would inspire me. Halfway through it, I turned to her and said, “Do you mind if I shut it off? I think I have to write something.” I wrote “What’s Mine,” top to bottom, right there. They kept saying in the show, “Don’t force it. Write what you know.” That’s the best way to start. “What’s Mine” is about being a girl growing up in a small town in Indiana, not knowing who I was and not fitting in and not knowing why. Hoping someday I would find my people and my place. That is certainly what’s happened for me. That song is very heartfelt; that’s why it ended up being the title track. It defines the whole EP for me.

GS: How did you go about selecting the remaining four songs on the EP?

AS: Erik wrote the lyrics and music for “Without You Tonight” for me. “Tough” and “Don’t Tell Us How To Love” were written by a songwriter that came to me after one of my Joe’s Pub shows. He asked me if he could send me some music he wrote and I said yes. He sent me like 36 songs. He’s amazing and he writes a lot. He’s a lyricist and he works with all of these club songwriters. I picked “Tough” right away because I thought it was fun and exciting and radio-friendly. I’ve always wanted to do a gay anthem about standing up and addressing the gay community; especially right now when everything is changing day by day. States are enacting laws to discriminate and then to support. Being from Indiana myself, I’ve been disappointed in my state as of late. I really loved the song “Don’t Tell Us How To Love.” We changed it a lot, freshened it up, changed out the chorus. I heard a friend of mine sing “Shadow Of You” at a benefit or something. He put me in touch with the songwriters.

GS: I’m glad you mentioned “Without You Tonight.” It has eternal tea dance classic written all over it. Do you have aspirations to be a disco diva?

AS: I wouldn’t hate that. It wouldn’t be terrible [laughs]. I would have no problem being a new Deborah Cox.