Here’s a guy who’s coming out of jail and trying to take his life back. To me it’s like a delayed coming-of-age story a little bit. 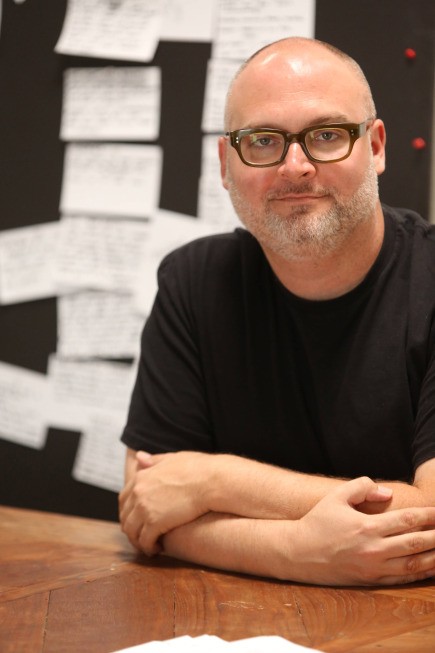 There's a new adult cartoon in town and it goes by the name of Chozen. It's the story of a gay white rapper in the process of rebuilding his career after being released from prison.

Series star Bobby Moynihan, who voices Chozen, has been on Saturday Night Live since 2008. He has kept active on the small screen in shows like 30 Rock and Girls. On the big screen he played Puck on When in Rome and Chet Alexander in Monsters University. Grant Dekernion is the writer, creator, and executive producer of Chozen.

Jerry Nunn called the dynamic duo up to to get the skinny on the chubby rapper who's killing it on FX.

JN: (Jerry Nunn) Hi, guys. How did you come up with the concept for the show in the first place, Grant?

GD: (Grant Dekernion) Well, I had always wanted to do a show involving music and the struggle to be a musician, and I've loved hip-hop my whole life, so I just started thinking about it. I also wanted to create a character that I'd never seen before on TV, and I think Chozen fits that bill.

I think there's a lot of interesting things you have with Chozen. Here's a guy who's coming out of jail and trying to take his life back. To me it's like a delayed coming-of-age story a little bit, and I thought that would be a fun way to kind of get into a type of story that's been told a few times but in a different way.

JN: Talk a bit about his crew.

GD: Chozen has known his crew since grammar school. These are all buddies of his from the neighborhood, and as the season goes on we do kind of see a little bit more of them and their formation and things like that. They've known each other forever, and when he gets out of jail they just kind of pick back up where they left off.

JN: I enjoyed the character of his sister Tracy.

GD: She is kind of a default crash pad for him, and that's one of my favorite parts of the show. I feel like she has this kind of animal living with her that she has to deal with, she's pretty responsible, and she's sharp gal. It's obvious there is love there. It's not obvious he appreciates everything she does, but I think he does.

It's important to realize this person has been in jail for ten years, and anyone who comes out of jail is a little bit of an alien, is a little bit of a man out of place and out of time, and I think Tracy is the one person that really understands him beyond all the bluster and can kind of ground him every time.

BM: (Bobby Moynihan) The pilot episode is a lot about how Chozen got where he is and how he's just gotten out of jail, and then the second episode revolves around Chozen trying to find out if this guy that's dating his sister is cheating on her, and that's one of my favorite things. He just got out of jail, he's trying to do all this stuff, but he's got to take a break real quick to make sure this guy is not messing with his sister. He's a human being and cares about people.

JN: Was it difficult getting an off the wall show made?

GD: Surprisingly, when it came to FX, it wasn't difficult. That's what they're known for. They are known for taking chances, and they are known for doing programming that's kind of unique and groundbreaking. This is the place myself and the producers always pictured the show as having a chance to live.

So we went there with high hopes and our high hopes were met. They were very excited and very invested, and we were really fortunate in finding a home on the place where I think the show has the greatest chance to make an impact.

JN: Did you have to audition, Bobby?

BM: I'm actually a gay white rapper cartoon in real life, so it just worked out really good. [laughs] No, I got an email saying, "Would you like to put yourself on tape for this," and they had one of the little character descriptions and they said Method Man was involved and I said, "Yeah, I don't want to do anything more in my life than this."

JN: How did you come up with the voice for Chozen?

BM: I know it sounds weird to say, but it's a voice I've been doing all my life maybe. I feel like I know a lot of people that sound like Chozen, and when I saw the drawing and read Grant's script the character was so well-defined already that all I had to do was come in, talk and have a good time. So I felt like it was something I had inside me already.

JN: Do you have to stick to the script?

BM: No. We do some improvising. Me and Grant will go back and forth, or he'll have a line and I'll add to it, or he'll say, "No. Try this," and I think it's a good mix between. The writing on the show is pretty wonderful. When we're doing the recording sometimes something new will come up or something very dirty, and then I beg Grant not to put it in, and he does, and I was wrong, and it's very funny.

JN: Have you heard of Big Dipper? He's an overweight, white, gay rapper in Chicago.

BM: You're not going to believe this but he's my father! [all laugh]

GD: I actually hadn't heard of him before making the show. As soon as the show was announced or something, all of a sudden I heard of him real quick because I think he said, "This show is about me," or something like that, and so then I became familiar with him.

JN: Big Dipper. You will have to look him up on YouTube. What was it like having Method Man in the booth rapping?

GD: Well, it was interesting. I've only done a few rap things with Meth, but the main one we did, he was actually in Norway at the time so we were over this wire, and I had written this pitch for what he would rap. Obviously he's the pro and he can feel free to mess with it if he likes. It was a little bit surreal him being like, "Okay, well play me what you've got," and he hears it and he's like, "Uh, okay," and then he does it his own way.

I mean, probably the funniest part is we had all these lyrics in mind, and he liked them. It took me literally an afternoon of editing to be able to get a demo of what this could sound like, and I think Method Man did it in one breath in about 32 seconds. So it's been really great, and we're going to be working with him tomorrow.

He's been very collaborative, and he's always open to throwing in his own flavor and switching things around and just in general making them better. So it's been really cool.

JN: Will there be rap guest stars to look forward to?

BM: The rap debut of Kathy Bates is going to happen. [laughs] No, I don't know. I hope so. I hope some guys see it and want to do it. That would be wonderful.

GD: We don't have anyone locked up just yet, but that's something we definitely want to try to do.

BM: Grant, you don't know this yet, but I would like to do an episode where you meet Chozen's mom and the voice is just DMX.

GD: That would be amazing.

JN: Will there be a tour as we have seen with shows like Metalocalypse?

GD: I don't know about that one. You know, I think we do a great job making these songs for the show, but I'm not a pro rap-performing artist. I do the best I can, and it does take probably a bit more production on our end to get stuff done than it would if we had someone with the skills of Method Man or whoever doing it every week. So I don't know if it would lend itself quite to that, but I've actually seen Metalocalypse the band, and I'm a huge fan.

BM: To be honest it's not hard at all. Even during the show week it's pretty easy. The recording studio is two blocks away from SNL. I'll go run, do that, and then run back to SNL. It's not as hard as you would think.

JN: Where did you come up with some of the LGBT material? Did you have consultants to help out?

GD: I don't know if I'd use the term consultants, but we have a very diverse staff on every level of the show from the creative staff to producers to the studio, so we have voices in the process represented. So yeah, I mean we definitely have had many people help us out whenever we're in need of knowledge, but they're part of the process.

JN: I wasn't offended at all being gay myself so there you go.

JN: With all of the African American and gay jokes were there any concerns about white straight guys doing the show?

Some people might not be into the subject matter. Maybe some things aren't for them, and that's totally fine, but I do think the show is wholly relatable to anyone and everyone, and I think everyone can get something out of it.

BM: Yeah, I think 20 years ago it might have been a little shocking. One of my favorite parts about the show is it does feel like, to me, a story about a guy and his friends, and he happens to be a gay white rapper. It's not like that's what drives him a lot of the times, but it's written so well that it just comes across. I feel like 20 years ago you'd be like, "Who is this guy?" and now I feel like there's probably 100 Chozens running around on this block in New York City right now where I am, you know? There are a lot of people like Chozen who are just living their lives. It's not really that crazy of a thing anymore.

JN: What do you hope people will take away from the show?

BM: Yeah, as far as an animated comedy goes, to me it's not like Family Guy which is just joke after joke. It's more of like this is a story about this guy's life. I hope that people want to see where he goes in his life, and I hope they continue to watch it so they can find out.