In the Pink: an interview with Thomas Lauderdale of Pink Martini 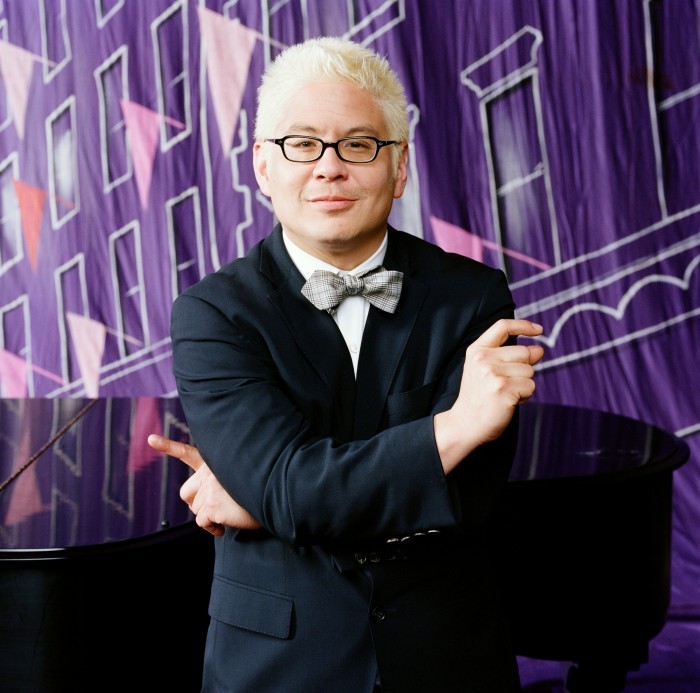 Where else but on a Pink Martini album such as Dream A Little Dream (Heinz) would you be able to hear Abba's "Fernando" sung in the original Swedish? Not only that, it's sung by the von Trapps (Sofia, Melanie, Amanda and August), the grandchildren of Maria and Georg. Yes, that Maria and Georg. Also worth mentioning is a duet on "Lonely Goatherd" (in keeping with The Sound of Music theme) performed by Wayne Newton and Jack Hanna. Just wait until you hear what Pink Martini does with the title track, a standard that became a hit for The Mamas & The Papas in the 1960s. Under the direction of gay bandleader and pianist Thomas Lauderdale, the international ensemble Pink Martini, has been intoxicating audiences throughout the 21st century. I spoke with Lauderdale in February 2014 about the new album. [Pink Martini performs on March 7 at Symphony Center in Chicago.]

GS: (Gregg Shapiro) In recent years, on albums such as 1969 and Get Happy, and now Dream A Little Dream, Pink Martini expanded its scope through collaboration. Can you please say something about how you see collaboration fitting in with Pink Martini's recipe?

TS: (Thomas Lauderdale) The band has always been about collaboration from the beginning. For me, I never thought that I would be in a band, let alone lead one. The reason I chose not to go off to music school or conservatory was because I felt like the people who were going to conservatory will really narrow thinking and completely isolated in a practice room and not be able to relate to other people. I wanted to go to a liberal arts college and get a broad education. What I learned in college was how to throw a party more than anything else. I was kind of like the cruise director of the Harvard campus for four years. When I started the band what I really liked about the aspect of it was bringing more people on the stage which made the whole experience more festive and fun. There were people there to ally with. A shared experience as opposed to being a lonely concert pianist with nobody to spend time with. The stage then became more theatrical and fun by adding more people. In terms of traveling that made it more interesting. In recent years, what's been amazing is this idea of collaboration keeping the band on its toes as well as me on my toes, as well as bringing new energy constantly into the mix so that things never become stale. After 20 years, it's still riveting. Whether it's writing a song in Italian with Alba Clemente such as "Una Notte a Napoli" to recording "Kitty Come Home," one of my favorite songs of all time, with Rufus Wainwright backed by the von Trapps on Get Happy. What makes it interesting is that it is sort of a partnership in these disparate things come together and you get this new thing that I wouldn't necessarily get on my own or even with just the band members.

TL: Two years ago I was scoring music for the annual Christmas tree lighting in Pioneer Courthouse Square in Portland (Oregon). I'm on the board for the Oregon Symphony and they called up and said, "We've got the von Trapps, the great-grandchildren of Maria and Georg and they are going to be playing with the Symphony tomorrow night. Do you mind if they come on stage during the Christmas tree lighting and perform a song or two?" I, who love The Sound of Music so much, was in heaven. When I met them, they were totally incredible. Beautiful young people who had been homeschooled in Montana and they've been traveling and touring and performing for 10 years and had this incredible rapport and this incredible unified sound. Plus there's the extraordinary history which is indicated by the name von Trapp. I totally fell in love. Looking at the repertoire they were performing, I thought "It's pretty Sound of Music heavy. I could think of at least five songs that they should consider. They were actually at that point trying to figure out in what direction to go. They were straddling that line between being the Sound of Music kids to adults. I felt like I was a good person to actually make recommendations and to be helpful. We started working on this album and my goal for the album was to help them make the transition out of being just the Sound of Music to actually something else. I think what the album does is that; bridges the gap and allows them to go in any direction they want to go in future.

GS: The album opens and closes with two of August von Trapp's compositions, "Storm" and "Thunder" respectively. Why did you choose to do that?

TL: All of the songs we chose for this album are the songs I think would be the next step forward for life beyond the Sound of Music. I think there will always be that aspect of them, and that may be the way in for many people, but in the end I think what it's actually about is something even more amazing than the original von Trapp family singers from 50 years ago. They are young and earnest and they have this new sound which is -- I don't know much about modern pop music but some people say they sound a lot like Fleet Foxes. That's interesting because August adores Fleet Foxes. The goal was to create an album that would set them free so they can explore any direction and any kind of music they would want to do in the future.

GS: Did you happen to see the NBC production of The Sound of Music with Carrie Underwood as Maria?

TL: No. I'm sure it was hideous. It's such a terrible idea. It's like trying to remake Casablanca.

GS: Pink Martini has previously recorded songs in Arabic and on Dream A Little Dream there is a song, "Hayalda hachi yafa bagan," in Hebrew. Is that the first time PM has recorded a song in Hebrew?

TL: For the holiday album (Joy To The World) we recorded a Hebrew prayer called "Elohai, N'tzor" with our cantor friend from New York City. We haven't recorded anything in Hebrew other than that, although we did record a song in Ladino, which is the intersection of Hebrew and Spanish.

GS: Some of Pink Martini's upcoming tour dates will feature the von Trapps. What can people expect from the concerts?

GS: Charmian Carr, who played Liesl in the 1965 Julie Andrews movie version of The Sound of Music is another guest artist on Dream A Little Dream and can be heard singing "Edelweiss." How did this collaboration come about?

TL: I met Charmian 10 years ago when she was traveling with the Sing-a-Long Sound of Music. It turns out I have a friend here in Portland named Daniel and Charmian is his godmother. He grew up in Los Angeles. When I started to work on this project I thought that I had to get Liesl in on it. She's an interior decorator, in fact she was Michael Jackson's interior decorator. So we flew her up.

GS: Finally, shortly before speaking with you, I interviewed Amy Ray of the Indigo Girls. In the spirit of future collaborations and color coordination, do you think there might come a time when Pink Martini might collaborate with, say, the Indigo Girls or P!nk?

TL: Sure! Absolutely! Why not? I think it's possible to work with anybody. I like collaborating with people who are entirely different. The message of Pink Martini is one of empathy and compassion and finding ways of bringing people who are very different together and unite them through music; which is also the message of the von Trapp's. Growing up in Indiana, my parents would entertain and I would go to sleep upstairs listening to the sound of laughter drifting upstairs. It was very calm in and comforting. I think that's what I'm trying to duplicate in every aspect of my life.