I’ve been aware of my gay fans since album one. There has been such great support from that community and it has gone both ways. 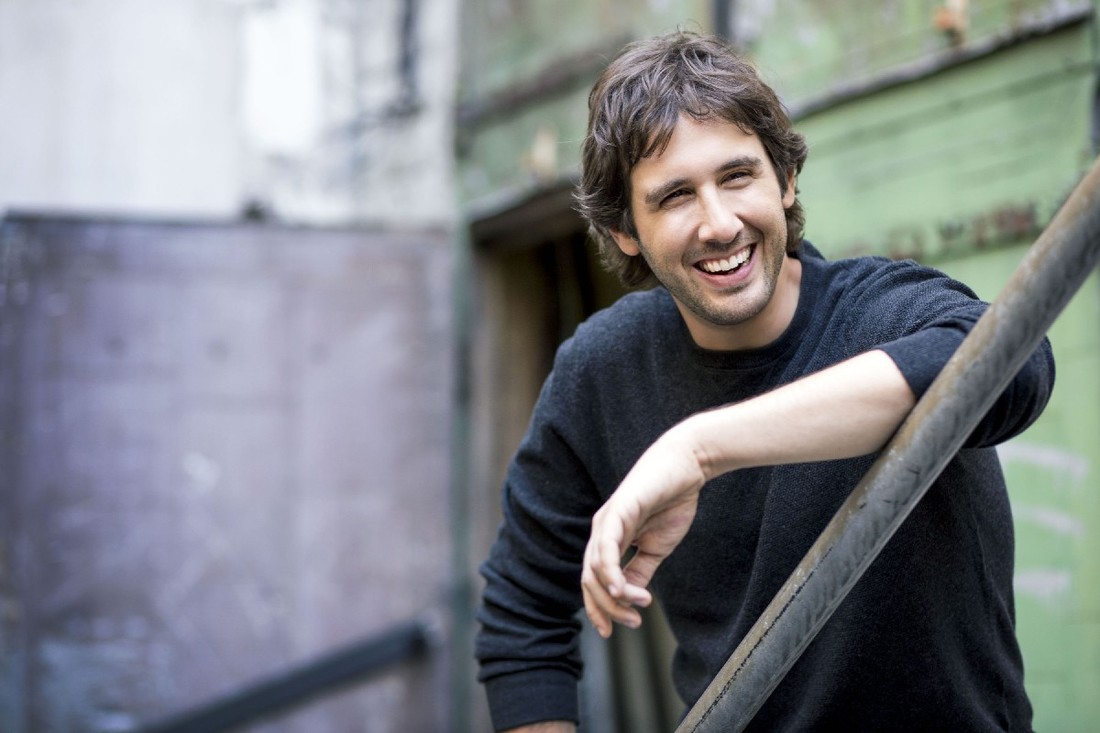 Josh Groban was born to sing show-tunes, something he does with grace and reverence on his new album Stages (Reprise). Groban’s respectful interpretations of songs from Les Miserables (“Bring Him Home”), Sunday In The Park With George (“Finishing The Hat”), Chess (“Anthem”) and Into The Woods and Sweeney Todd (the “Children Will Listen/Not While I’m Around” medley), among others, are beautifully rendered. A pair of duets, one with Kelly Clarkson on “All I Ask of You” from Phantom of the Opera and one with Audra McDonald on “If I Loved You” from Carousel, are also marvelous. Groban is embarking on a multi-city tour in the fall at which he will perform songs from Stages as well as favorites from his other recordings. [Groban performs on Oct. 16 in Chicago at the Chicago Theatre and on Oct. 29 in Los Angeles at the Dolby Theatre.]

Gregg Shapiro: With so much from which to choose, what can you tell me about the process of selecting material for Stages?

Josh Groban: The selection of material was actually one of, if not the most, difficult things of this entire process. When you’re walking in, basically like a kid a candy store, to a project where there’s an endless canon of material, you have to step back from it as a self-indulgence. You have to look at it neutrally. You have to look at a couple of things. What songs are best for my voice? What songs can I provide an interpretation that I feel can be relevant if it’s been done 30 or 40 times? Do I even need to sing it? Is it something people would even want to hear? Of course, the unsung heroes of these kinds of recordings, and also the songs themselves, are the arrangers and orchestrators. Is there an arrangement that’s going to be something to take this to a place where I can make it my own? We may have started with 50 songs from pre- and post-1960s and then we started to drift post (that era). Being that this was the first record of mine with these songs, I wanted to focus on songs that I was inspired by growing up. I love so many of them from the last 100 years, but I really wanted, for my first step forward, to choose material that has inspired me and got me into the world of musical theater. That was important for me on this one.

GS: It’s interesting that you should say that because you included “Anthem” from Chess, a song you performed on the Chess In Concert album which also featured Idina Menzel. What was it about that particular song that made you want to record it again for Stages?

JG: Chess, admittedly, was not a show that I grew up with. It was introduced to me when I did it for The Actors Fund on Broadway. We did that at the New Amsterdam Theatre in 2004/2005. When The Actors Fund was doing the show and they came to be about playing Anatoly, I didn’t really know the show very well. They gave me a recording of it and I was blown away by it. It’s so brilliant and has always worked, I think, so much more effectively as a concert, because the book is a little dense. We did that and it was an eye-opening experience for me. Doing it again at Royal Albert Hall was a reinvigoration of my love for the show. There are a couple of bootlegs of it from New York on YouTube. There was a live recording that we did from Royal Albert Hall that sold 10 copies. I still felt like I wanted to record my own definitive studio version of it. If I was going to make a first record of these songs, I wanted to include it. Benny and Bjorn wrote it to have the kitchen sink thrown at it; you can’t really follow it with anything. We always knew it would be the final song on the record.

GS: Do you have an all-time favorite musical and is it represented on Stages?

JG: Yes, I would say my all-time favorite musical is Sunday in the Park With George. (Including) “Finishing The Hat” (on the album) was not going to be a battle that would be lost for me. It was probably the first show that I ever saw, but it was on VHS. My parents brought home a copy of it, with Bernadette Peters and Mandy Patinkin, when I was 10 years old. Even at the young age, I remember sitting in front of the TV and being fascinated with the chords, the interpretation, the story-line. There’s so much there that you can take in as a kid. As you get older and start living your life, you start to realize the intricacies of everything he’s trying to say. He (Sondheim) would probably say that none of his shows are autobiographical. But you listen to a show like that, about the struggles of art and balance and sacrifices, there’s so much you can take from it as a fan of the composer, as well, that is so fascinating. It’s one of those shows that’s like peeling an onion. Every year I get older I appreciate something new about it.

GS: Tony winner Audra McDonald joins you for a duet on “If I Loved You” from Carousel. What was it like to sing with Audra?

JG: It was very intimidating just because I’m such a huge fan of hers, both as a performer and a person. We’ve always just kind of been friends. We’ve been a part of performances together, but we’ve never really blended voices together. We’ve just sung next to each other. We did a Marvin Hamlisch tribute for the New York Phil. We did a college football game together [laughs], where I did the anthem and she did “God Bless America.” I’ve just always wanted to sing with her. She won her first Tony for that show. Her voice, in Carousel, is one of the great joys. To be able to blend with her, it was nice to be able to be in the same room. We recorded that at Avatar Studios in New York. It was a thrill. She’s such a brilliant artist.

GS: Speaking of show-tune duets, you sang “Somewhere” from West Side Story with Barbra Streisand on her 2014 album Partners. What was that experience like for you?

JG: Amazing. That was the second time I was lucky enough to be able to records with Barbra. The first time, I was just a kid, on one of her duets records when I was maybe 19. It was a very different experience for me then as opposed to at 33. So much has happened between then and now. Barbra’s been a very kind supporter of mine all these years. I, of course, view her as one of the all-time greats. Any time you get to share air with someone like that, you’re walking into it as someone who’s trying to psych themselves into believing [laughs] that you deserve to be there. Also, you just try to be a student as well. You view it as a master class. I don’t view it any differently than when I got to stand next to Placido Domingo or Tony Bennett or somebody that you have to say yourself, “I’m going to do the best that I can to make this recording great.” You have to be in work-mode. At the same time you have to appreciate that this is a rare, once in a lifetime master class that you get to embark on. That’s kind of how I view it.

GS: Since Neil Patrick Harris left Hedwig and the Angry Inch the show has had a series of performers taking the lead. Could you play Hedwig?

JG: I’m not sure I could handle the waxing, quite frankly [laughs]. I think I have too much chest hair for the role [laughs]. There’s too much upkeep for those leather shorts for me. I love the show. I’ve seen it a few times now. It’s one of the great contemporary shows. I’m so happy that it’s had such a great revival because it’s great. They always tell you, “Know your strength.” That’s a show where I think I will enjoy it more as a fan than onstage.

GS: Could you maybe see yourself covering “Midnight Radio” someday, perhaps on Stages 2?

JG: Sure! That’s the wonderful about when you have the freedom of recording an album. Taking the songs away from the context of the show and letting them live on their own. You get to explore how universal they are to everyday life, even if you’re not onstage playing the role. That’s what I’ve loved about when Barbra and countless others record these albums; you allow the songs to live on their own. “Midnight Radio” is amazing. “Origins of Love” is a great song, as well. There are lots of options for future records of these songs for me, for sure.

GS: If you didn’t already have a gay following, singing show-tunes is one sure way to guarantee one.

GS: Are you aware of your gay fans, and if so, what do they mean to you?

JG: I’ve been aware of my gay fans since album one. There has been such great support from that community and it has gone both ways. It’s been incredible to have felt that love since day one. It’s been a fan base that I’ve been proud to have. Yes [laughs], I suppose that recording an album like this…if it pleases that fan-base and gets even more, then wonderful!

GS: Is there a movie version of a stage musical in which you would like to star?

JG: That’s a good question. I’ve talked to Tim Rice about a movie version of Chess. Chess is such an intimate game that I think that one of the things that’s been difficult to translate to a Broadway stage is that the game of chess is so close up. I think there might be a way to make a film version that allows the music to be grand like any of the grand movie musicals but allows the tension of the game that is inherent in the show, come across better on a screen than onstage. I’ve also wanted to put A Light In the Piazza on film. That would be beautiful and the music is just timeless.