When you put that mask on and you can hear your own breath. It’s like a mini-horror show inside your own head. 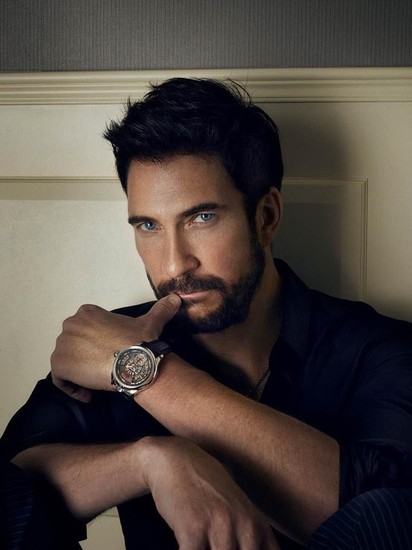 Many will remember McDermott from the movies "Steel Magnolias" or "Home for the Holidays", but it is television where he has excelled. On "The Practice" he won the Golden Globe Award for Best Actor.

ChicagoPride.com's Jerry Nunn talked to McDermott while the show is on holiday break.

JN: (Jerry Nunn) Hi, Dylan. Let's start at the beginning of American Horror Story. What made you audition in the first place?

DM: (Dylan McDermott) It's funny, you only have these instincts every once in a while and I remember on The Practice, I had a huge instinct around it that it was going to be very successful. Then again, when I heard this story of American Horror, I had a similar instinct about this show. I remember my agent pitching me the idea for it and I immediately was attracted to it. When I sat down with Ryan Murphy, it all came to fruition. I've only had those instincts very few times in my career. The Practice and the American Horror Story were both of them. So I don't know what that is. I don't know if it's just my gut. My gut was really telling me that this was the show because I was looking for something different and looking for, obviously, a show that was going to be successful and that was going to resonate and I think I found it with American Horror.

JN: Your instincts were right. Congrats on everything.

JN: How did you get involved with the show for the second season?

DM: We talked in the summer and Ryan said he was looking for something for me to come back in. I wanted to come back and we weren't sure in what capacity. Then the day the show aired, he called me and said he wanted me to come back as the son of Bloody Face, the modern day Bloody Face. He just told me; I hadn't read any of the script, so I knew nothing about it. It was sort of a blind call.

When he told me the story of it, I was just like flabbergasted because it was just so horrendous how this guy would survive and what he would become and who he was. I was just fascinated by him. It was so different from, obviously, Ben Harmon. I just thought it was a great way to make television completely different from anything you see on TV, because when do you get to play different characters on the same show?

JN: Can you talk about your character on this season?

DM: Well, Johnny Thredson is obviously he's a troubled man. Where I hope he goes and where he goes are two different places but I think he's got a sole purpose in life. He really feels so scorned by his mother. Everything is about his mother. The reason he's doing all these horrible things is because he was rejected so harshly by his mother, aborted. His father was a serial killer. His mother aborted him and he still lives. So his whole trajectory in life is really about her.

JN: Were you able to add anything to the character of Johnny?

DM: Yes, you'll see him in the next episode smoking some crack. I don't think that was in it. That was an important thing that I wanted him to be high because a lot of these guys are high and a lot of people do terrible things on drugs.

JN: What is it like wearing the mask of Bloody Face?

DM: When you put that mask on and you can hear your own breath. It's like a mini-horror show inside your own head. I twittered a picture of myself with it on against a wall that said, "Beware," and I have a machete in my hand and it's truly a frightening picture. Sometimes you have to search for inspiration with characters and other times, they just drop out of the sky and they arrive. Johnny Thredson was one of those for me.

JN: Have you been watching other storylines on Horror Story?

DM: Yes, I was really following Zach Quinto's character and Sarah Paulson's character. It's funny that they would end up being my parents. I had no idea and then all of a sudden, I'm their son. So it's funny that it would all work out in such a way.

JN: How many more episodes will you been on?

DM: I believe the next three out of four.

JN: What has been the strangest thing you have had to do on the show?

DM: Well, I mean if you watched all the episodes, you know that I've had to do some strange things clearly, but I was part of the ride when I talked to Ryan Murphy about this show. Obviously the cry baiting and walking around naked, and now I'm playing a serial killer, is all in terms of doing American Horror Story, this is what comes with the dinner. So you just have to be up for it.

JN: Is it hard not to take home some of this dark and twisted work?

DM: There are a lot of things in this show that are disturbing and hard. There is a lot of violence in this show and it's hard to get around that. It makes you feel things and it's upsetting; but nonetheless, as an actor, you can't judge it. You have to be in it. When I'm playing a serial killer, I'm in it. I'm not judging him. I'm not judging his environment. I'm just sort of like looking for why he is the way he is. But there's no doubt that you're going to take this stuff home with you.

JN: Do you have a favorite scary movie?

DM: I do like the Polanski stuff more than anything else. Rosemary's Baby is still one of my favorite movies of all time. The idea of her being impregnated with the devil and all that stuff is just like so frightening and being in New York at The Dakota, it's so scary. I'm going to work on a movie in February called Mercy from Jason Blum who is the producer on the Paranormal Activity movies and there is a similar theme to Rosemary's Baby in the movie. So somewhere I am attracted to that in a strange way, so that does scare me, the sort of demon baby, more than anything else, like we had in the first season of American Horror.

JN: Would you ever do a remake of it?

DM: No, because that's a great movie. It's like remaking Psycho. You can't. Some movies you just can't remake and that certainly is one of them. Some things should be just left alone, maybe the sequel to Rosemary's Baby, but not the remake.

DM: Well, this has been a good year for me. I was doing American Horror and then going into The Campaign with Will Ferrell and Zach Galifianakis. I made Olympus Has Fallen with Morgan Freeman and Melissa Leo, Aaron Eckhart, Gerard Butler, a sort of a taut thriller, played a comedy again with Selena Gomez in Behaving Badly, and then back to American Horror. So it's been a great year and a lot of different characters and that's the stuff I love. I really am a character actor in my heart of hearts, because I like developing characters and kind of painting a past for them.

JN: Come visit us in Chicago and promote some of these new movies you have coming out.

DM: I love Chicago. Chicago is the most amazing place because the portions of food there are bigger than anywhere else in the world!

Catch the latest episode of American Horror Story: Asylum as it returns January 2, 2013 only on FX.