Songbook romance: an interview with Dan Martin and Michael Biello

At the heart of the show is the story of our 40 year relationship as life partners and creative collaborators. 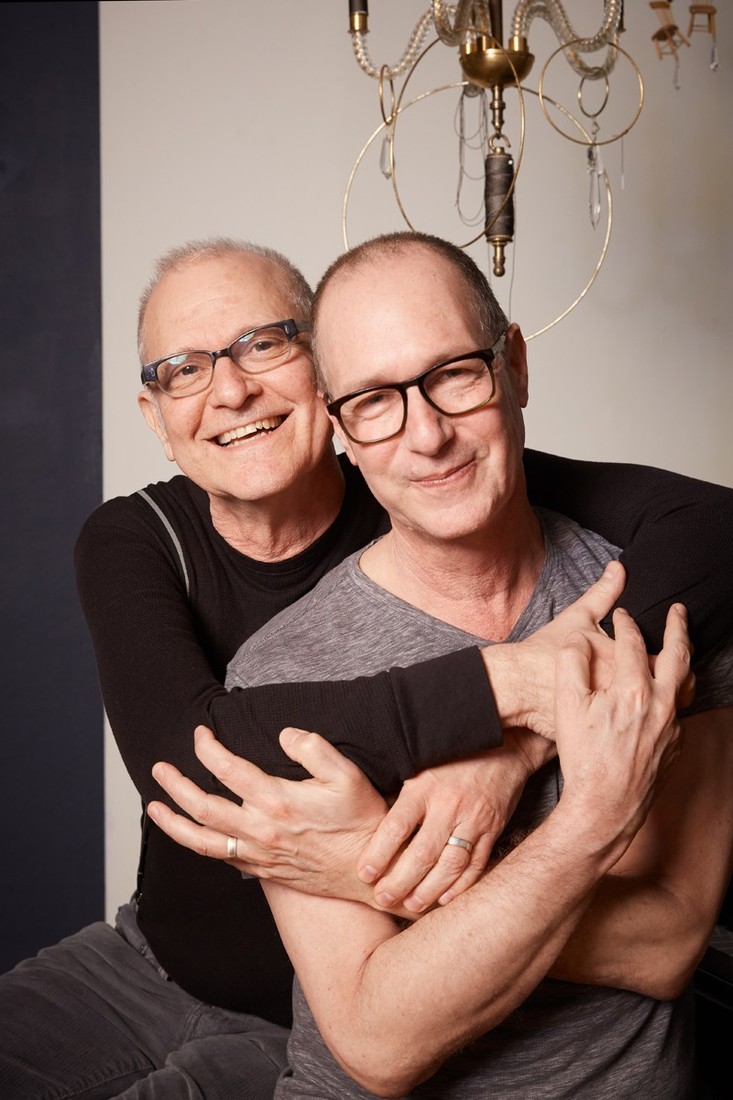 Martin and Biello have been collaborating, romantically and creatively, for 40 years

Without making them sound like plumbing or lighting, it’s fair to say that Dan Martin and Michael Biello are fixtures of Philadelphia. Longtime presences in the city’s theater, visual art and music scenes, and beyond, Martin and Biello are the men behind Biello Martin Studio, 148 N. 3rd Street in Old City. Perhaps you’ve walked by or wandered in to be illuminated by Biello’s sculptural lighting designs.

Chicago theatergoers are certain to be familiar with Martin and Biello’s work through productions mounted in the city. The Cousins Grimm was present there in 2009, while Q – the Songs of Martin & Biello and Breathe were produced in Chicago in 2000 and 1999, respectively. Breathe even won an After Dark Award for Outstanding New Work.

Opening on April 14 in the Louis Bluver Theatre @ The Drake in Center City Philadelphia, Nicole Manning in association with Center City Theatre Works presents The Biello Martin Songbook, directed by Jeffrey Lesser. The new musical revue highlights the couple’s musical theater collaborations, spanning four decades. I spoke with Dan and Michael about their personal and creative partnership in March 2016.

Gregg Shapiro: What came first, your romantic partnership or your songwriting partnership?

Michael Biello: We met in a multi-media dance theatre workshop in Ohio. I was a dancer, Dan was a musician. I’d say it was romantic for me. Subliminally we were making music and art, and writing our own love song.

GS: What was the first song you ever wrote together and what was the inspiration?

DM: My memory (we’re talking 40 years ago) is that it was called “Sun Song.” I was composing on the guitar then.

MB: I shared a journal of my sketches and poems with Dan and he set one poem to music. He called it “Michael’s Sun Song.”

DM: When I was first getting to know Michael we’d go up to the roof of the house he lived in on South Street and he would show me poems he’d written in his journal. I started setting them to music and that’s how the songwriting part of our collaboration began.

GS: How soon after writing that song did you feel confident in the other’s abilities to collaborate again?

DM: We were always collaborating – not only writing songs but also making dances and other performance pieces. Back then songwriting was just one aspect of our creative relationship.

MB: The collaboration worked from day one. There was a trust present from the beginning when it came to words and music. Having my words set to Dan’s melodies was an instant turn on for me. After the first song the words and music longed to be together. We love writing songs together.

GS: Would each of you please name your top three musical theater influences?

GS: Would each of you please name your top three musical influences?

GS: Michael, you are also a visual artist. How does that work in terms of also being a songwriter?

MB: My visual art work is me, myself and I making it. It’s tangible, three-dimensional. You can pick it up. Move it from place to place. For me, songwriting is another story. It’s collaborative. It lives between Dan and me; moving back and forth between words and music until it becomes the song we want to sing. After a song is complete it sits in a file until it has an opportunity to be presented live.

You can see and have and hold art. Songwriting lives in the moment it is heard and then lives on in your memory. Sometimes it makes me crazy switching from one to the other. But crazy comes with being an artist. Both art and songwriting challenge me in different ways to share my creative gifts.

GS: In addition to being a gallery in which to display Michael’s work, Biello Martin Studio in Old City is also a space in which other kinds of performances, including musical and literary events, are held. Please say something your combined vision for the space.

DM: The Studio is our creative sanctuary.  Every time we make a piece of music or art the energy of that creation resonates in the space.  When other creatives present their work there, the energy they express fuses and intertwines with ours, and with each others’.  It’s really quite sexy [laughs]!

MB: It’s important for us to share our creative space with other artists who are somehow in harmony with our energy. It gives me pleasure to share what we created with other like-minded artists. It’s an intimate space so intimacy is key; work that is personal and positive. Not everything works in our studio and the things that do inspire.

GS: Center City Theatre Works is presenting a new musical revue, The Biello Martin Songbook, directed by Jeffrey Lesser. What is the genesis of the project?

MB: Dan has wanted to create a songbook for years.

DM: Last February, I decided to perform an intimate evening of our songs for invited guests at the studio. I was feeling really frustrated and powerless because we’d written several amazing musicals but they were each taking an excruciatingly long time to get produced. One day I just said “fuck it, I’m going to sing my own goddamn songs,” and talk about the journey of Michael’s and my songwriting.  Director Jeff Lesser was in the house and approached us a few weeks later to see if we’d be interested in expanding the concert to a larger theatre with an ensemble of singers, etc.

MB: It’s been emotionally charged for me hearing Dan play through much of our work and creating our first songbook.

GS: How did you go about selecting the material to include in the revue?

DM: At the heart of the show is the story of our 40 year relationship as life partners and creative collaborators. The songs we chose help tell that story. Structurally we’re presenting “slices” from four of our musicals – Breathe, The Cousins Grimm, Marry Harry, and In My Body (which will have its world premiere in Philadelphia at The Prince Theatre in November 2016).  Interspersed between those musical slices are some of our favorite standalone trunk songs.

GS: Another recent Biello Martin theater project, Marry Harry , starred Annie Golden of Orange Is The New Black. What can you tell me about that show and its current status?

MB: First, I want to say Annie Golden is fierce! (She was) a dream to have on our team; a total joy to hear her voice sing our songs. Marry Harry went through some re-writing (again) after our last production with American Theatre Group. Since then we’ve been shopping around for a home to do a reading hopefully leading to a full production.

DM: Marry Harry was the first musical we wrote not focused on same sex love – but still focused on love!  It’s based on a screenplay about Sherri and Little Harry - two 30-somethings who fall in love and try to escape their controlling parents. Annie Golden played Debby - the long-suffering girlfriend of Little Harry’s father – and gave a knock out performance at our New York Musical Theater Festival production in 2013. Our producer is currently talking to New York and regional theatres for a follow-up production.

GS: As Philadelphia-area natives who also had a part-time residence in New York, you returned full-time to Philadelphia permanently a few years ago. Please say something about what it is in regards to Philadelphia that makes it special to both of you.

DM: We came back to Philadelphia to help care for Michael’s  parents and aunt.  In addition to the beauty of that care-giving experience - we reconnected with great friends and rediscovered the expansiveness (and affordability) that Philly offers working artists.

MB: Since we were both born and raised in Philadelphia we have a history here. Our parents are here. It was important for us to be close to them and help them in their extra-elder years. It’s been a challenge re-entering the Philadelphia art/music/theater scene. That’s part of why we created Biello Martin Studio as a place to do our creative work. Through the studio great connections happen. Philadelphia also lends itself to having more physical space to make art and music, which is a beautiful thing.

GS: In addition to your theater work, you have also been integral in supporting and promoting LGBT music and artists, via GLAMA (Gay and Lesbian Music Awards) and later through Outmusic. Please say something about why what was important to both of you?

MB: We sang out before it was fashionable, before it was trendy, before the “stars” came out. It was a special moment in time for all involved. We are blessed to have been in the midst of such great musical queerness.

DM: Building, living, and working in community has always been part of our DNA. We were among a handful of musicians writing and performing openly gay songs starting in the 1970’s.  In the late 1980’s and early 1990’s we started inviting this small community to share music and food in our East Village loft. It grew from there and became quite a force for many years.  The organizations are now gone but the spirit lives on!