I am very excited to share this unique and amazing gift, and hopefully spread a ton of positive energy around the world! 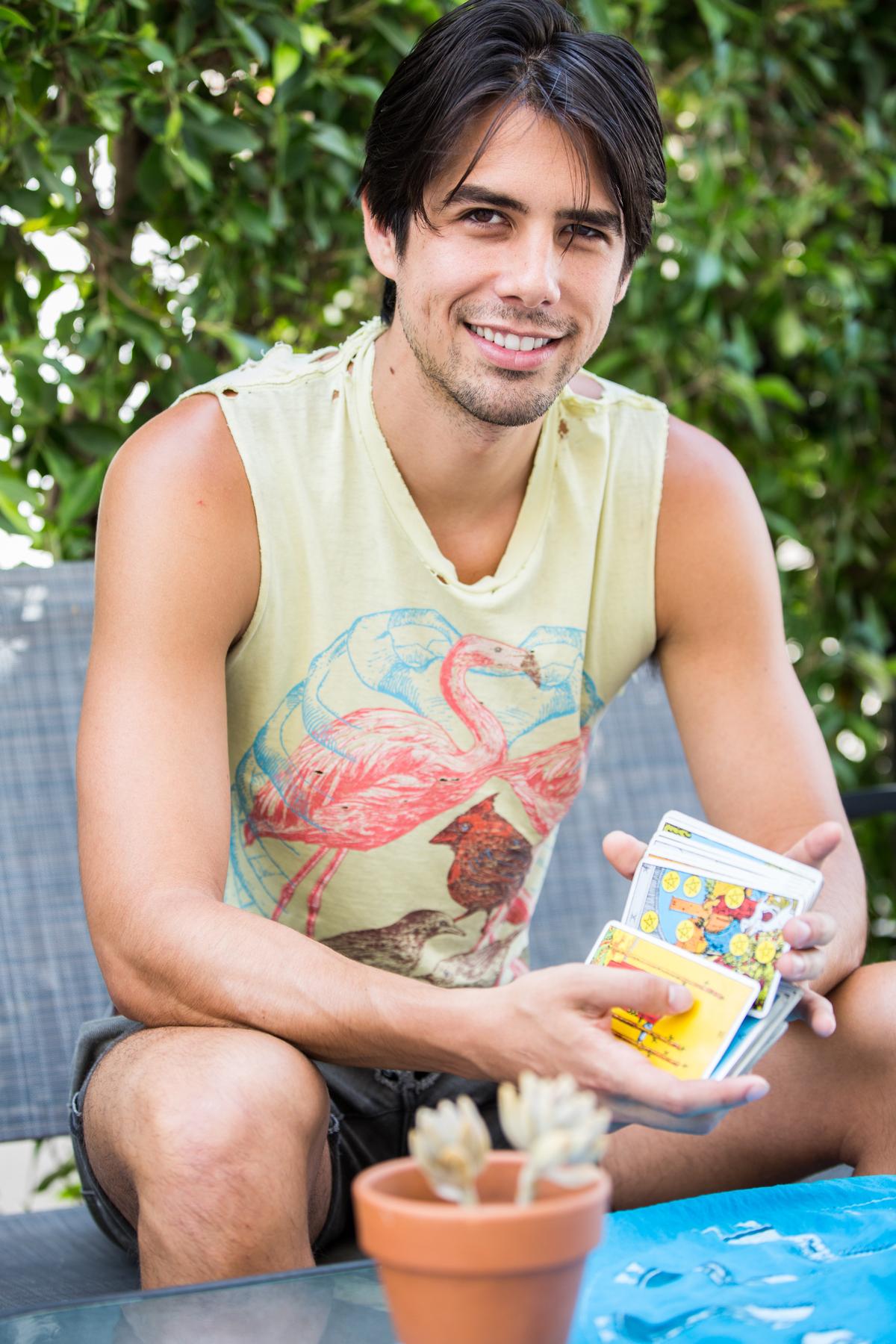 Artist adds a personal twist to his creations

Nathan Streifel is a queer, multiethnic, multi-disciplinary artist living in Los Angeles. Known for his daily Dear Abby style of advice, with Tarot Card pulls on Instagram and his prolific art creations, Nathan is turning heads with ambition and innovation for the arts. GoPride.com’s Bill Pritchard met up with this gentle soul to see what the future has in store.

BP: Nathan, you spent some time in Chicago, tell us a bit about that and where you are now.

NS: I love Chicago, the culture, the food and the theatre scene. For three years, I lived in Boystown sowing my young gay oats. I moved to Chicago to attend the Theatre School at DePaul University and received my MFA in acting. Originally, from Washington State, I grew up in a small logging town on the coast called Aberdeen. Known for Kurt Cobain, Twilight, and now me, It was a beautiful place to grow up, very green. I think gardening and nature have become such a big part of my life because I grew up on such fertile soil. I am also a Taurus, so I have that earth sign energy.

After I finished at DePaul, I moved straight to Los Angeles to pursue acting. In fact I was recently on the new Punky Brewster reboot that appeared on Peacock TV. You can check me out in Episode 5.

NS: It was great! The shoot was super fun, Punky Brewster was slightly before my time, and I think it was more of a Gen X thing. I am a millennial kid, so it was fun to go back and watch some of those old episodes. I also just filmed an episode for season 2 of The Other Two, which will appear on HBO Max later this year.

BP: How has filming been during the Covid pandemic?

NS: It was actually similar to previous experiences. I mean, a lot more precautions, masks and everything, no crafty table, but it has all been super smooth. The studios have done an incredible job of keeping production moving while staying safe given the circumstances.

BP: Acting is one part of your treasure of talents. What else are you working on?

NS: At the moment, I am channeling Da Vinci! I draw, paint, write, compose, write songs, and am a tarot card reader.

BP: How do you have time for it all?

NS: Because I have so many interests, I really try to look at the big picture and the scope of what I can do over the course of my lifetime. I also tend to work in short focused segments throughout the day. I am always setting timers, I will draw for 30 minutes uninterrupted, and then I will song write for 30 minutes uninterrupted. I even set a timer for how long I garden. I also use Airplane Mode on my phone a lot. I recommend it to everyone if they are looking to help with focus throughout the day.

BP: Tell us more about your drawing

NS: Drawing has been my newest creative passion. I picked up a book called You Can Draw in 30 Days by Mark Kitsler over quarantine. I excitedly went through it and by the end I realized I could draw, and I could do it well! It’s been such a nice creative release for me. I find switching creative mediums has been a very synergistic way of being an artist for me.

NS: My favorite thing to draw is animals. I think it comes from never being able to draw animals as good as I wanted to when I was a kid. Now that I feel empowered to draw, I want to draw the whole zoo! Nature in general inspires me as an artist. I find it fascinating how every living thing on earth has specifically adapted to suit their environment. It’s Wild!

The first commissioned piece I did was a pet portrait of my friend Nick’s dog Mona. He really encouraged me, and I began drawing more and more pets, as well as other animals, people, and places. I love drawing pets because there is such a special connection to the client. It’s not all pets. Someone recently asked to draw something inspired by Kung-Fu and M&M’s. I love stuff like that because it challenges me to go for it with my imagination.

BP: As an art collector, I have really enjoyed your gift Nathan. I am blown away that it’s a relatively new expression for you! Your Harriet Tubman series is epic. I am beyond honored to have two of your works in my collection. You are also a Tarot Card Reader and working on Art series that ties the two together? Tell us more about that.

NS: Thank you Bill. Harriet Tubman is an icon. The project began as a way to raise awareness that the Trump Administration sidelined the process of putting her on the $20 bill, and raise money to support racial justice organizations. In drawing her repeatedly, and learning more details about her life, she has inspired me to examine my own experience with race, racism, and living in the U.S.

My newest art project is called The Art x Tarot Collection. It is an experiential package meant to help the recipient mentally prepare themselves for everything they want to accomplish in the year ahead. It incorporates my love of drawing, tarot, astrology, and community. I am creating an original art print for each astrological sign this year. There are 13 prints available for each sign that are all hand signed and numbered. In addition, you also receive a personalized Tarot Card and a detailed written interpretation of that card based on your goals for the year.

There is a ceremony for the recipient when they receive the whole package. It’s meant to be an incredibly personal one of a kind gift, specifically tailored to the recipient. I am very excited to share this unique and amazing gift, and hopefully spread a ton of positive energy around the world!

To find out more, follow and message Nathan on Instagram. You can see The Art x Tarot Collection here as well. GoPride and Nathan Streifel have joined forces for the month of June to do a weekly Pride Tarot card pull on the GoPride Instagram platform. Be sure to look for those all month long.