Comics for the Carpenters

We really wanted to make a comic book that comic people loved not just fans following us from the movies. 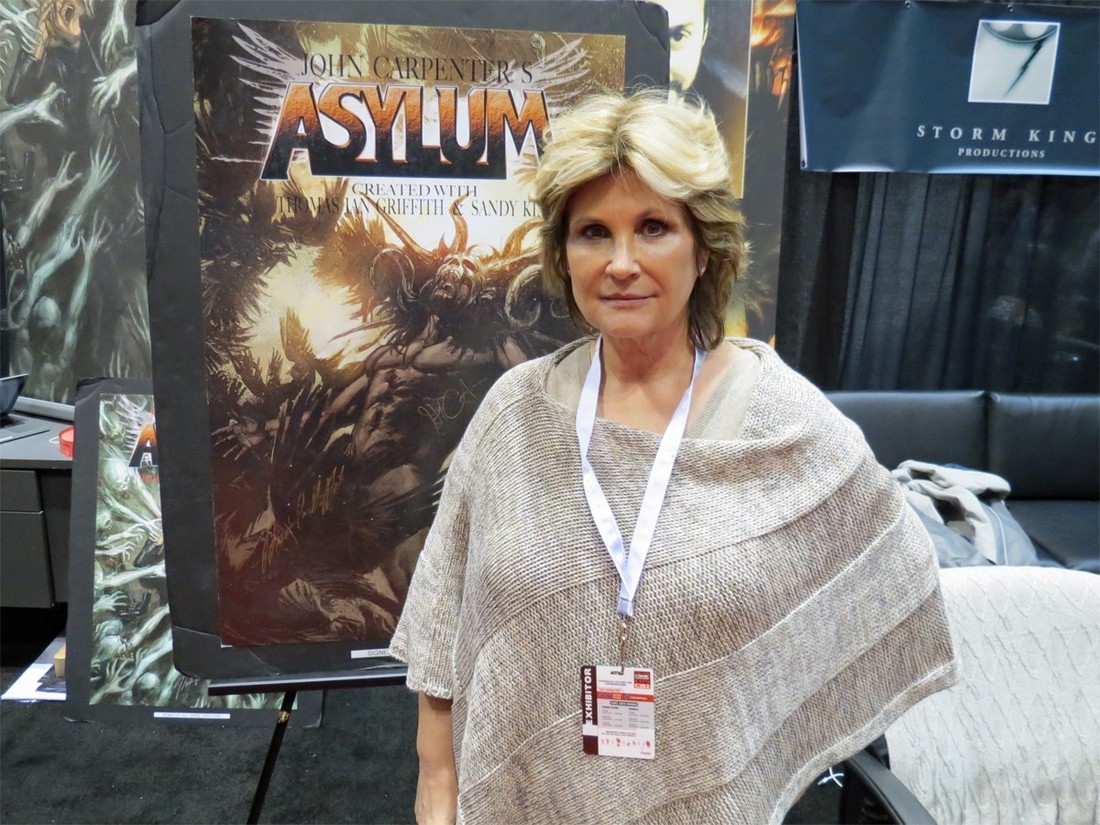 Sandy King Carpenter is a producer of such film classics as They Live and Vampires. She and husband John Carpenter launched a graphic novel called John Carpenter's Asylum that was voted the Best of 2014 by the Village Voice and is nominated for an Indie Fab Award by Foreword Magazine.

John Carpenter is known for horror movies like Halloween, The Fog, and The Thing. He's been with Sandy since 1990 and worked together on film projects Starman, Big Trouble in Little China, and Prince of Darkness.

We sat down with Sandy over a sandwich at a recent comic convention to discuss Asylum.

SKC: (Sandy King Carpenter) It's going really well. It is in it's second year and story arc. The trade book is issues one through six with a prequel that is not available anywhere else. We are now at issue 10 with 11 due at the printers any day. It came from a story that Thomas Ian Griffith, John and I came up with years ago. We weren't sure what to do with it. At one point in time we were thinking of having a television series with it. In the midst of having it set up in the studio and taking meetings, I realized in that point in time that the studio was more interested on how they could go non union. They weren't caring about what we thought was integral to the look of the story, and the city as a character. After a meeting I went home and told John that we were going to do a comic book instead.

JN: Was that a surprise?

SKC: No, because for every show that we put together we do a lot of art and concept drawings. This was a very visual story. We spent two years after that researching how to make comics, and the right artists. It would have been very presumptuous to just jump in and make a comic book.

Bruce Jones was willing to spend a year writing it because it is not the same as writing scripts. Lots of people showed us the ropes and we learned more every month about the business. We really wanted to make a comic book that comic people loved not just fans following us from the movies. We wanted something that made John's fans happy, delivering the kind of story they wanted from John Carpenter, but also made comic fans happy. We made that comic that you want to keep in your long box under your bed.

JN: Can you go over the plot for readers that don't know about it?

SKC: A defrocked catholic priest has seen demons, spoken to the devil, never seen an angel, God has never spoken to him. He runs into an LAPD homicide detective and they are both chasing the same guy, one to lock him up as a serial killer, and the other to save his soul. Meanwhile, Lucifer is coming through in the city of angels as a practical joke on God, and it goes from there. That is the set up and we take it further with what is driving each of our lead characters, and how they have to come together.

What is under it, like most John Carpenter stories, that will give us our moral compass. This is not so much about religion but who we are as human beings. Are the angels within us that make us know right from wrong?

JN: Is there an LGBT character or angle to it?

SKC: Not directly. What I try and do is try to have an integrated universe around it. One of the reasons we wanted to start in LA is that it is an multicultural, multiethnic part of the world. I think most of the comics I see are too white bread. They are all a bunch of blue eyed blondes running around. That doesn't look real to me.

We haven't addressed any gay issues or trans issues, things like that, because we largely talk about sin and I don't want to muddy that water and allow someone to judge that. If I had a character like that then I would make it non remarkable as I would in any of our movies. That is part of the fabric of life. The same we used in They Live we made it a very homogeneous community with the homeless and disabled community. We had to find disabled actors to use because that is part of the fabric of our lives, not to be remarkable, but to be part of our lives. I tend to go for that angle. I don't want to have the first gay superhero, I want that person to be part of the environment.

I want to be really careful when there are good and evil judgments going on to see how that is handled to not complicate that issue.

JN: So if it comes along?

SKC: Sure, if a character happens to be in the story then yes.

JN: What has been the best past of doing this project?

SKC: What is really great about it is that we are storytellers, whether it is around a campfire or a movie screen, or a comic book. It is another medium for us to tell a good story. Our fans are in gaming, comics, and the movies. Why not? We are not risking anyone's financial environment. We self publish so I find it a lot less stressful. We can say what we want.

JN: I went to Western Kentucky for college in Bowling Green and since he was from that area a lot of the names in his movies like Halloween are taken from there.

SKC: His dad was head of the music department at Western Kentucky. We go visit his dad every once in a while.

JN: You must go to a lot of comic conventions.

SKC: We always have gone to them promoting movies but now with the comic I go to five or six a year. I have to do my day job producing so I can't go to all of them. I hit C2E2, New York Comic Con, and Long Beach. I hope to see fans in Emerald City and other places too.

Visit www.stormkingproductions.com for more information on their projects.