Deeper art: inkedKenny is an artist and not just a photographer

I believe my images are much more suggestive over the obvious... 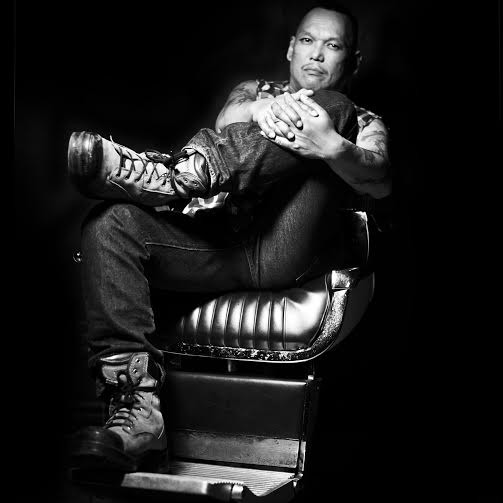 “inkedKenny is a man who loves men – naked, clothed, but especially naked – both physically and emotionally. And when he takes pictures of naked men, that love and passion transcends the medium in which he works, and turns those images into art. It doesn’t take a college degree or a practiced eye to recognize art, or when someone is an artist.  Because when you see an image created by someone who has a bone-deep love, a driving passion for what they’re shooting, you just…know.” - inkedKenny.com

Anthony Meade speaks with the self-taught photographer and artist about his passion for creating remarkable images.

AM: Tell me a little bit about yourself. Where were you born?

IK: Macau… island off of Hong Kong, a Portuguese colony back in the day. I was found abandoned in Macau at the age of 6 months. I was adopted and brought to Vancouver, B.C., where I grew up, as youngest of 3 and only son.

AM: When did you come out as gay?

IK: Realizing i was gay around the age of 8, questioning myself why I would be staring at Men in washrooms, and finally at the age of 11, actually cruising men in department store washrooms which gave my first gay experience (by my choice) the summer between grade 6 to 7 and the rest is a big ol gay history.

AM: When did you first pick up a camera and decide this is what I want to do?

IK: I took photography in grade 8 and hated it… got kicked high school and pursued a career in hairdressing, that led to makeup and to working with photographers in fashion and advertising which then led to creative direction for special events for 12 years before picking up a camera again in 2008 on a random situation by accident… was asked to shoot some Venetian masks for a client of a friend of mine… client was so pleased with the results and after seeing my photos blown life size, I thought lets give this a try.

IK: After my first shoot, I called in a bunch of a friends to do some test shots which turned into my first series “the fight club’ which was published in Instigator magazine a couple months later… so, I guess just by default, it manifested into homoerotic genre.

AM: The line of work you’re in is usually associated with males, is that right? What is the usual reaction of people when you tell them what you do, and how do you deal with it?

IK: I’ve chosen to photograph what inspires me… my default answer is always, ‘I’ve chosen a very specific genre that is not the easiest to keep relevant, but am still at it, and loving every aspect of it!'

AM: What's the most bazaar photo shoot you were commissioned to do or did on your own?

IK: Not sure if I’m jaded, but I haven't come across anything bazaar in my head that I have done yet… to others possibly I have, but not in my world.

AM: Is there anything that you have photographed, second guessed yourself, and then turned out to be brilliant?

IK: All the time… that's the artist's right to always feel self confident about what they do… having my first women’s show, definitely got my brain churning more.

AM: With the many works that you have done, what would you say is/are your most memorable project/s?

IK: My project for ACON, HowHard project in Sydney Australia allowed me to push the edges of my photography and what I was allowed to show there and not so much in North America. Also, allowing me into some historic landmarks to shoot, that no other local photographers were able to get before I did.

AM: With your inkedKenny photo book, what was the process of going through the thousands pd photos and choosing the ones that went into the book? Was there something special about those photos? People?

IK: The Men Of  inkedKenny photo book was a nine month layout process over skype and pdf via email… mid way through, my editor and I decided to make it a 5 year retrospective of my works from day one to present at that time… the hardest part was deciding on the cover in which I won that battle, choosing a closeup face and a black and white cover which they rarely do.

AM: Are there plans for another inkedKenny book?

IK: Yes, most definitely. It's all about timing, and I am always shooting people in consideration of my upcoming books.

AM: Given the chance, is there a model or person with whom you would like to work with in the future and in what kind of project

IK: Colin Farrell… and simply just because… he exudes sexuality in such suggestive way… enough said!

AM: What technology/software/camera gear do you use? Do you have a favorite camera brand that you use exclusively?  What keeps focused on what you do best, as you photograph?

IK: I use Nikon and am a brand loyal person all the way… and of course, Adobe with my Apple are my post production apps.

AM: Where do you find the models that you use in photos? Do people contact you or do you someone and know that have that inkedKenny look and approach them?

IK: I have people contacting me on a daily basis on social media. My process is usually I have to meet someone in person before making any decisions. I’m attracted to one's energy first and foremost, looks come secondary as its more than just a physicality that I'm trying to capture… also, if we don't get along, it's just not gonna work. I’m always scouting to add my inkedKenny collective.

AM: You have traveled the world photographing beautiful men. What are some of your favorite places that you have been?

IK: Melbourne, Sydney, NYC, Chicago and Montreal have been where I been most inspired to date.

AM: The one thing that I LOVE about your work is that you use that the local city and NON-studio backgrounds. You shoot in bars, lakefronts, streets, etc. The photos you capture really gives a “feel of the moment” with the city or place that you are shooting. When you go for a shoot in a city, do you research what's there or available?

IK: Because i travel doing what I do, I like to capture an essence of the city I’m in… somewhat like telling a story of my travels with the muses I photograph I do some studio, but that's usually when weather is awful, and have no choice in the matter.

AM: I know that in another life, you have a background in women's fashion. Tell me a little about that.

IK: I started out barbering, then got into hairdressing/makeup… which quickly led me into doing hair/makeup for photographers working in fashion editorials, advertising, commercials and music videos… for the last 12 years of my ‘fashion vanity’ career, I was creative directing special events and fashion shows along with my Vanity team.

AM: I've noticed that you have started to photograph women in the “inkedKenny” format as well now. What made you decide to step outside your comfort zone and decide to that? Whats biggest difference, other than the obvious, photographing women rather than men? Do you find they are a little more reserved than the men that you photograph or are they just as sexually driven and have no problem “leaving their comfort zone” ?

IK: I’ve photographed women before in a group situation for Fashion Editorials...I was approached by David Joseph (curator at the Galleries At the Center of Halsted) last year to do an exhibit, but the request was for me to capture women how I do men.  The women Ihave photographed has shown me no inhibitions when I would be photographing them… but that could also be the theme of this exhibit is ‘alpha’ women.

AM: What motivates you to continue taking pictures economically, politically, intellectually or emotionally? What inspires an “inkedKenny” photo shoot?

IK: As they say about artist… their emotions are projected through their work… so, I gather its emotional, intellectual and sometimes political due to whatever is happening out there in this world.

AM: The models that have seen your huge body of work know what your “style” is. Do you go in with and idea of what Inked Kenny wants OR do you just have an idea and decide to let the photo shoot flow and see what happens?

IK: Inspiration always come from the within the moment… all the guys I have photographed more than once, know my process… just show up with some options of wears, and lets get inspired.

AM: What do you think makes your work distinct? With all the photographers out there, what is it that YOU feel that makes inkedKenny’s work a bar ahead of the rest?

IK: Not sure if it's a bar ahead of the rest, but I have been told over and over that my images stand out and are recognized with or without my logo… I have yet to pinpoint exactly what that is.

AM: Aside from photography and erotica, what other things are you passionate about?

IK: My ‘Chosen Family’ and having great connections with people I have met in my travels… and of course my Jack Daniels and shaking my butt around to my favorite Dj’s at a club!

IK: SNATCHED came to be by me wanting to call it SNATCH… instead of me saying photographed, I always use the word captured… put 2 and 2 together ,and out came SNATCH… the exhibit is curated and the final selections were made by David.

AM: Tell us 2 things that people may not know about inkedKenny, that you would like to share with people.

IK: As most of my friends, and social media followers know me to  have a big social life… one of my favorite things to do, is sit on a couch and watch re runs of my favorite sitcoms… have been an advocate of HIV since being diagnosed myself back in the late in the 80’s.

Artist reception for inkedKenny's 1st Women's exhibit, Snatched is at the Galleries at the Center on Halsted, 3656 N Halsted, beginning on July 22.