I'm gay. I've never said anything else in any interview. But not everybody reads interviews and I don't want to alienate the females in the audience. 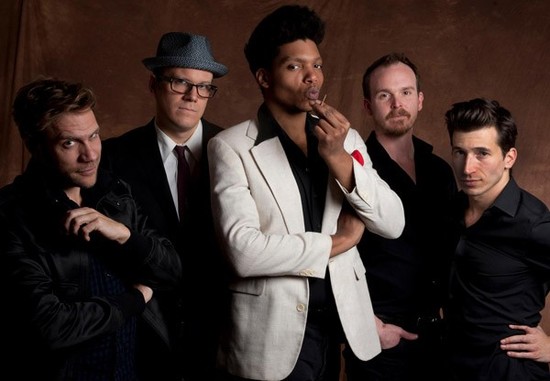 In the tradition of retro soul revivalists such as Sharon Jones & the Dap Kings and Fitz & the Tantrums, Chicago's JC Brooks & the Uptown Sound return with their sophomore release "Want More" (Bloodshot). The funky title track might leave you wanting more, but "Everything Will Be Fine" and especially "I Got High" deliver in full. What better compliment could there be than one Chicago band paying homage to another as Brooks and company do on their soulful reinvention of Wilco's "I Am Trying To Break Your Heart"? Other soul sensations include "I Can See Everything," "Don't Lock the Door," "Missing Things" and "Sister Ray Charles." But when you hear JC Brooks and the Uptown Sound, gay music probably isn't the first thing that comes to mind. Openly gay front man Jayson (a.k.a. JC) Brooks hopes that will change. The band did play the release party for Kristen Kaza's "Fish Out of Water" DVD at Lincoln Hall, after all. Now Brooks, who is also an acclaimed stage actor and recent Jeff Award nominee, is stepping out briefly on his own to perform on May 19 at the Alt Q Festival in the Maurer Concert Hall at the Old Town School of Folk Music, 4544 N. Lincoln. I spoke with Jayson in early 2012.

GS: (Gregg Shapiro) JC Brooks & the Uptown Sound had the distinction of playing (Chicago mayor) Rahm Emanuel's inauguration concert. How did that come to pass?

JB: (JC Brooks) Basically, Wilco was already going to play it. And I guess Rahm's people asked him (Jeff Tweedy) for a suggestion. He said there's these guys...

JB: It was pretty cool! It's just nice to know that he (Tweedy) really likes our cover (of "I Am Trying to Break Your Heart") and that he's not just paying us lip service. "Oh, that's a nice thing you did to our song." "I Am Trying to Break Your Heart" is near and dear to a lot of Wilco fans' hearts. I'm just glad we didn't offend the guy who wrote it. It started out with us doing a fundraiser for Emanuel's inauguration with Jeff Tweedy and then after the fundraiser Rahm was like, "You guys are going to play my inauguration." I was like, "All right, it's already in the bag."

JB: Also, he has to support the arts or the artists will dredge up his ballerina past [laughs].

GS: Yes, Twinkle-toes Emanuel. Are JC Brooks & the Uptown Sound on the Obama's radar as well?

JB: I doubt it. But I hope so. He's inviting people like Beyoncé to perform. If we get mentioned in the same lungful as Beyoncé that would be great.

GS: "Want More" (Bloodshot), the debut album by JC Brooks & the Uptown Sound fits in with soul revival currently taking place, alongside acts such as Sharon Jones and the Dap Kings, Fitz & the Tantrums and Raphael Saadiq. Why do you think this style of music is having such a strong resurgence?

JB: Looking back it seems that there's always something bad going on in society. I think we were hitting a point as a society, similar to the last time that soul music was around, when grade social change was needed. They needed a kind of free music and then soul got political. Before that soul was a freeing, fun, forget your troubles music. At the beginning of the 2000s, there was so much focus on overproducing and math rock and things like that, overly complex music. We just wanted to strip it down, get it simple and have danceable shit. I think it's coming back around because I think the political side to it does speak to soul. It's a time for action as you've seen this past year. I was so proud when the Occupy Movement started. I was floored! We still do something! We get out into the streets, oh my God! I thought the time for that was gone.

GS: There was all this talk of revolution, but no one was doing anything.

JB: Yeah, everyone is blogging about revolution. (Sings) "blogging ‘bout a revolution." I can't wait to see what spring brings for the Occupy Movement.

GS: Jayson, you are credited with co-writing five of the disc's 11 songs. What is your role in that songwriting process?

JB: It varies from song to song. Sometimes Bill (Bungeroth), Ben (Taylor) or I will come in with a complete song. Here's what the guitar's doing, here's what the bass is doing. Other times we jam a little bit and I come up with A and B sections that we like and I'll do a quick phone recording. I'll have placeholder rhythm and melody so I won't be singing actual lyrics just something so that they can hear a melody and see how it fits in there all do a quick recording of that take it home and write actual lyrics for the next rehearsal.

GS: In addition to your live music career, you have also established yourself as an actor, most recently in the Chicago production of the Tony-award winning musical, "Passing Strange." Would you say you consider yourself an actor who sings or a singer who acts?

JB: I'm an actor who sings. It's something that came up in a conversation a couple of years ago. I could tell that the band got kind of bristly when I said it. People are like, "Brother's like an old soul singer."And I'm like, no, I'm just acting like a soul singer.

GS: You have described JC Brooks as a "very theatrical...big ham...of a character." Do you think your background as an actor comes in handy when you are performing with the band?

JB: Oh, absolutely! I like that it does give me the license to be over the top and the really extreme, instead of being a realistic straight-laced guy on stage. Because I really do miss the hell out of theater. If this has to be the replacement then I'm going to make it fun for me.

GS: Will you be in any upcoming theatrical productions or are things on hold while you tour with the band?

JB: I have to put it aside for the time being. Just because things have picked up so much in the past couple of months. It's really not feasible.

GS: Did you go to school for theater?

JB: Yes, I graduated from Point Park College in Pittsburgh with a BA in theater. When I started school I was kind of anti-musical, but as a high school graduation present my mother got me tickets to "Rent" and I saw it and thought, holy shit, this is what musicals can be. "Rent" is the reason that I decided to choose musical theater as a major. David Cromer is directing a production of "Rent" at American Theater Company (in Chicago). They called me in to the callbacks for the role that I have wanted ever since I first saw a "Rent."

GS: I'm sure you'll have another chance again.

JB: Yes. The other killer is that I had a fucking awesome audition. And they had me come back again, even with all my conflicts. Hey, Mr. Cromer, please just remember me for any future projects. I'm not going to be able to do this. But that's the positive take away from that. God damn it, I could've worked with him and played my number one dream role [laughs]?

GS: You are also going to be performing at the Alt Q Festival at the Old Town School of Folk Music in May. As a gay artist what does performing at a queer music event mean to you?

JB: For me, beyond being just a gay artist, as an artist, I write a lot of different kinds of stuff. So the stuff that I'm writing for the band is specifically tailored for the band. I've been writing my own songs, like folk acoustic stuff, for a long time, and I haven't played out in forever. It's been about six years. I need to bone up because I've only been playing to write.

GS: So you'll be playing a whole different set of songs?

JB: Yes. I sent Scott (Free, organizer of the Alt Q Festival) some of my songs, including one that I wrote about gay teen suicide, and he said (enthusiastically), "This one, definitely!" I'd never gotten to play that song out.

GS: This is an opportunity for you to show another side of yourself.

JB: Yes, to show the other side, and also to be more involved with the community. I've always been looking for a way to be more involved on the social and active side of the community, not just patronizing bars [laughs]. Because I'm very involved in that part of the community [laughs]. It gives me another connection to the community at large. Especially when I feel like the band, not consciously, pushes this aside. We were talking about the character of JC Brooks, when we first put it together, when I first came up with him, because I was working from these archetypes, JC Brooks was straight and he was singing to girls. As we've developed it, he's more pansexual. He's singing to everyone. We play the pronoun game a lot and are lyrics and now all the stuff we write is pretty much gender-neutral. I'm gay. I've never said anything else in any interview. But not everybody reads interviews and I don't want to alienate the females in the audience. It's awesome for the band, because I'm the best fucking lead man ever because, after shows girls are like, "Hey can I buy you a drink?" It's taught me how to politely put someone off. The other guys come in and sweep up. I'm sure there are gay guys in the audience but no guys are ever coming up to me and talking to me after shows and talking to me or anything.

GS: That could change.