I always felt very attracted to those traits; people who aspire to be something much, much larger than they are and who have a complete misunderstanding of who they actually are. 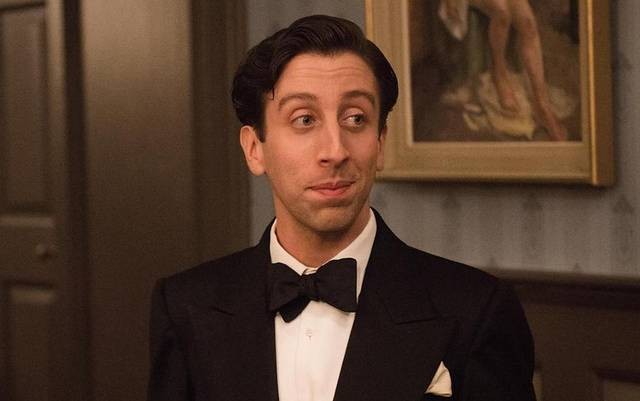 If Simon Helberg didn’t already have a substantial gay following from the comical interplay between his character Howard and Raj (played by Kunal Nayyar) on the beloved sitcom The Big Bang Theory, his portrayal of sexually ambiguous pianist Cosme McMoon in Florence Foster Jenkins (Paramount) will remedy that. Based on the true story of society hostess Jenkins (played by Meryl Streep), an opera fanatic with a tin ear when it came to her own operatic renditions. But that didn’t stop her from performing concerts, including a legendary one at Carnegie Hall. McMoon, hired by Jenkins and her paramour St. Clair Bayfield (Hugh Grant), to be her accompanist, is portrayed magnificently by Helberg. The actor gives the character dimension and depth in a stellar performance. I spoke with Simon at the Faena Miami Beach Hotel about the film shortly before it opened in theaters.

Gregg Shapiro: How aware were you of Florence Foster Jenkins before being cast as her accompanist Cosme McMoon?

Simon Helberg: Zero. Zero awareness. But it felt familiar, this theme of delusions of grandeur. I always felt very attracted to those traits; people who aspire to be something much, much larger than they are and who have a complete misunderstanding of who they actually are. I think that’s kind of sweet and tragic.

GS: Opera is featured prominently in the film. Are you an opera fan?

SH: No. There’s that, too. It’s more that I’m unfamiliar than not a fan. There are pieces of opera, throughout the years, that I’ve been exposed to and that I enjoy. But I didn’t know much about it. I love jazz. That was a tough enough thing to like in high school; I didn’t need to go looking to opera.

GS: What other kinds of music do you like?

SH: Not to be cliché, but I do have an appreciation for all music. Opera fell under that umbrella just at the lower end of the spectrum of my experience. Aside from jazz, I love rock and pop and the Beatles; a lot of stuff that isn’t as current maybe, somewhere between the sixties and the nineties. The forties, too.

GS: Acting in a period piece means that you get to wear costumes that you wouldn’t ordinarily wear. What was that like and was there a particular suit of clothing that Cosme wore that you liked best?

SH: As he began to have little more money and sustain this job, his clothes did get nicer. The first outfit that he wore was kind of sad. It was shredding on the leg. Consolota Boyle was the costume designer – brilliant! He wore these little sweaters that were very sweet. At the end, the suits were so beautiful; they handmade some of them. What an era for clothes. The flies on the pants were so enormous; it was very ambitious. You had to unbutton forty buttons just to pee. I don’t know what was going on down there in the `40s.

GS: What are the challenges involved in playing a real person?

SH: There’s a sense of loyalty to the actual person that you want to be mindful of. In some ways, I think there are less challenges if you have less information. Too much information might be tricky or if the person is incredibly familiar in a pop culture context. But to play somebody that nobody really knows or that there are only a handful of facts about is actually the perfect balance [laughs]. You get a little more information than you would have in a fictional piece and nobody knows. This really was a combination of Nick Martin’s script and a handful of these facts that existed and imagining what this guy would be and what I would want him to be.

GS: Cosme has to audition to play for Jenkins. As an actor, how do you feel about the audition process?

SH: [Thoughtful pause] If I have the choice, it’s nice not to have to put yourself out there because it’s scary. But sometimes it can be very fun, too, as an opportunity to see how this thing fits. I’ve done thousands of them, but I still get pretty nervous. It’s always slightly inorganic because you’re in a room that usually has fluorescent lighting and you’re holding paper and reading off of it or miming a prop or whatever. It’s a very different technique than actual performing.

GS: You do something wonderful with your facial expressions and eye movements in the audition scene. Cosme is a combination of nerves and confidence, both of which you express perfectly. Can you please say something about that?

SH: I guess I wasn’t conscious of how things appeared, which is good. You want to be on the inside instead as opposed to the outside. In terms of what was going on inside, that is what it was, a mix of shock and awe. He’s in this situation where he is prepared, but it’s also probably a new situation for him. He’s in awe of it and he’s stunned by what the reality of it has become. His life probably flashes before his eyes in that moment.

GS: Cosme’s sexuality is kind of the pink elephant in the room. For me, the scene at the party in St. Clair’s apartment, when Cosme is cruised by that man who eventually attaches himself to Cosme, manages to be the subtle confirmation of what we’ve all been thinking. What was it like to play a character such as Cosme who lived at a time when his actions and attractions could threaten his very being?

SH: Yes, it was illegal. I read this Cole Porter biography just to understand what it was like in New York at that time to be not just gay but in the music world and arts world and what went on. Even though it’s not focused on in a heavy handed way, it felt interesting also knowing where Cosme came from. How he moved from Mexico to Texas to New York; he must have already felt somewhat like an alien just based on where he was, speaking a different language and coming to a different country. Then there he is in New York. I felt like that there was also an interesting moment, having that guy put his arm around him and with other subtle references, I thought, maybe he doesn’t know, at this moment, what he is. Particularly in a time when not only didn’t people question things but you weren’t even allowed to express it even if you had the answer. Maybe when that arm gets thrown around him he has a moment of “What just happened?”I think the line before that, he says to St. Clair (Hugh Grant), about how all of his friends’ friends are so welcoming or interesting. I thought that would have been an interesting area to live in where this grown man at that time, maybe he gets married. Maybe he never knows. Maybe he knows but doesn’t (act on it). A question mark was more interesting to me (than the answer).

GS: One of the most beautiful and powerful scenes in the movie occurs when Florence (played by Meryl Streep) comes to visit Cosme at his apartment. After talking for a bit they both end up at his piano where they play a duet. What was doing that scene with Meryl like for you?

SH: It was kind of the Everest of the movie for me in a lot of ways. Having read the script, it was a scene that stood out in that moment, particularly with the duet. I didn’t even know if I was going to even be considered for the movie when I read the script, I thought maybe there would be a chance that I could audition or something. Is there a world in which my hand would be next to Meryl’s hand [laughs]? Meryl and I talked about the scene being an anomaly in some ways. This very long and intimate scene, in his apartment, outside of the context of the world we’ve been in. We talked about it being the gentleman caller scene in The Glass Menagerie. It had this very human quality. It took its time. I remember there’s that moment where he asks if she wants a glass of water. In rehearsal, she took the water and drank the whole glass. She said to (director) Stephen (Frears), “It’s very important that you shoot me drinking the whole glass. The whole movie is about this.” I remember her saying that the whole movie is her drinking that glass of water. That’s her genius. It’s this abstract idea and yet it makes totally perfect sense. The thirst and the desperation...

SH: Yes! It’s this larger than life woman needing the human elixir to get back up on her feet in this vulnerable moment.

GS: You mentioned Frears who has directed many important films, including My Beautiful Laundrette, Prick Up Your Ears, The Grifters, High Fidelity, The Queen and Philomena. What was it like to work with him?

SH: It was an absolutely unique and intimate and quiet [laughs] experience. He doesn’t talk much, but he’s a lot sharper than he pretends to be. He likes to live in this aloof, absent-minded professor sort of space – that was, at least, my experience. He’s very self-deprecating. He feigns at being unimportant to the process. He’s eccentric, too. He’s always got a scarf and colorful socks and no shoelaces. But underneath it all is this honed-in, laser-precise magnifying glass put up to humanity. But while you’re working with him, it’s very easy and loose. Again, not a lot of verbal communication, but somehow you’re always fulfilling his vision and yours at the same time. That’s the sign of being a master. You look at his work and there’s not one thing that’s like the last. There’s no director I can think of who has a resume quite as eclectic. He’s just lovely.

GS: The movie season in which Florence Foster Jenkins opens in theaters is full of period pieces, including Woody Allen’s Café Society and James Schamus’ Indignation. If you could live in another time in the past, when would that be?

SH: [Laughs] Gosh, it changes so much.

SH: Well, I don’t think about it that much anymore because I know it’s not going to happen [laughs]. Wow, that’s such a good question. There was a time when I was in high school where I thought, “The sixties seemed so cool! You could go to Woodstock and there was the Beatles and those bell-bottoms. The long hair was so awesome!” I think we’re in an interesting time, actually, more interesting even than it was 10 years ago or that I ever realized. The advent of technology in our lifetime and what we’ve witnessed because of that, both good and bad. It’s a fascinating moment. I used to think nothing happened in the eighties or nineties. OK, the TVs got flatter. I thought any moment where technology brings about a shift would be interesting. I feel like in the twenties and thirties, when it was quieter [laughs] and there was more space and cars were…but then there was a lot of war back then, but I guess that’s the same now. But wait, what if you could go all the way back to the year five [laughs]! Sometimes I look at the clouds and I think those looked the same in the year five. That’s something that maybe binds us all together.