Don't Make Me Go travels over to Prime Video

Everyone used in the movie was locally from New Zealand or Australia, except for John, Mia and our crew. 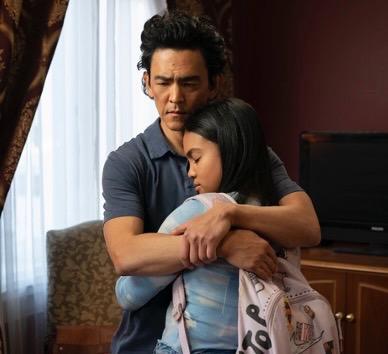 Don’t Make Me Go is a new coming-of-age drama that was just released on Prime Video. It tells the story of a single father named Max, played by actor John Cho, who takes his teenage daughter Wally, portrayed by newcomer Mia Isaac, on a road trip from California to New Orleans. Lots of love, laughter and bonding happen on a cross-country adventure that leads to Max’s twentieth high school reunion.

Some may recognize Cho from the Harold & Kumar films and the Star Trek reboot. Isaac has another film planned for release from Prime Video on July 29 called Not Okay starring Zoey Deutch.

Hannah Marks directs this project from an acting perspective with past projects including BBC America’s Dirk Gently’s Holistic Detective Agency and the biographical film The Runaways where she played Tammy.

Isaac and Marks met up while in Chicago to discuss the project shortly before the release.

JN: (Jerry Nunn) Welcome to the Windy City! Where is Henry Cho from the cast?

HM: (Hannah Marks) He wanted to be here but he is filming a TV show right now.

JN: How was it creating the chemistry with him, Mia?

MI: (Mia Isaac) It was my first movie, so I didn’t know what I was doing. I was nervous and I looked to John for guidance. I’m so glad he did.

I was a little intimidated because he’s such a talented actor. He’s been working for many years. I was worried there wouldn’t be a connection, but he opened up to me right away.

He was kind and showed me a lot of love and I am really grateful to him.

JN: Do you have a funny story about John Cho?

MI: We did a lot of things on the set. We sang songs and played 20 questions. When we did the crawfish scene we ate a ton of crawfish and then it got cut from the movie. We were at a table with a steaming tray of crawfish. We were dying from the smell and it was all over our fingers. Looking back it was funny, but at the time it was the worst!

JN: What drew you to the project in the first place, Hannah?

I loved the bold choices that the screenplay made with the opening scene being on a nude beach and the big shift that happens at the end of the movie. I was drawn to those aspects of the script.

JN: How did you become a part of this production, Mia?

MI: I auditioned and there was a big casting call. I sent in a tape not knowing if they would even see it. I was surprised when I got the callback, then another callback and then the chemistry read so it was the farthest I had ever gone in the audition process.

JN: Well, good job, you made it. The nude beach scene woke me up right at the beginning! Was that interesting to shoot?

MI: I wasn’t allowed to be around anyone naked. I was 16 going on 17, so legally I couldn’t be around naked people. The way it was shot wasn’t any better because we had to put tape over certain small areas, but they were still naked.

HM: It is almost more graphic and provocative to hide the nudity than people just being completely naked.

JN: Some sets use socks to cover up private parts on the set.

MI: The thing is the socks sometimes start to drop and will fall down to the knees. That feels much more risqué…

JN: I’ve never heard about the sock drop before.

JN: How have the Red Hot Chili Peppers done it for so long? How similar are you to the character of Wally, Mia?

MI: I feel very similar to Wally when I read the script I related with her right away. We are both the same age and at the same stage in our life. I feel like we have gone through some of the same things in our lives at the same time.

JN: Sounds like you grew up with the character.

JN: You can always have it to look back on just like a scrapbook.

MI: Especially since it was my first one so it is a beautiful memory.

HM: Some of her childhood videos are in the movie too.

JN: I had found my birthfather just before watching Don’t Make Me Go, so some scenes resonated with me. Talk about those scenes in particular.

HM: That was part of the screenplay from the beginning when I read it. It is about missed opportunities and not taking your chances. That was a chance to show it cinematically.

It is a sadder choice but that is life and reality. It can happen. It is bold in the sense that a mother is leaving her child onscreen. We usually see a father leave the family. It is a unique take even though it happens in real life.

JN: Whose idea was it to use music from queer singer Girl in Red on the soundtrack?

HM: That was one of the first songs sent to me by our music supervisor Andrea von Foerster. She is terrific and did the movie (500) Days of Summer, which I thought the music used in that movie was great. There was also a big karaoke scene in that movie.

JN: Where are the drunken karaoke girls? They looked like fun!

HM: [laughs] They were the world’s best extras. They really seemed drunk and they made us laugh the whole time.

JN: Do you think they were actually drunk?

HM: Who knows? It was six in the morning and they were singing that live too, which was fun.

JN: What are your go-to karaoke songs?

HM: I have only done one karaoke song when my friends were trolling me and it was “Bohemian Rhapsody.” My friends knew I didn’t want to do karaoke, but then they gave me an eight-minute song.

JN: That is a tough song.

HM: I started to give up halfway through.

MI: I was going to sing “Wonderwall” and then the karaoke machine broke.

JN: How did you find the gay couple in the film?

HM: They were New Zealand local actors who were terrific. Everyone used in the movie was locally from there or Australia, except for John, Mia and our crew.

We got lucky and auditioned them. I loved Josh Thomson who was the one with the curly hair. He is normally a comedian, but I thought he did so well with the more dramatic moments.

JN: Where would you like your careers to go in the future?

MI: I liked working with Hannah so much and was so inspired by her. I would love to write and direct like her. I look up to her a lot.

HM: Can we trade? I would love to go back to acting!

JN: What projects are coming up?

MI: I wrapped a movie right after we did Don’t Make Me Go called Not Okay. It is actually coming out on July 29 on Hulu. I leave next week to fly to Jamaica to work on a new Hulu series called Black Cake based on the book by Charmaine Wilkerson.

HM: I have a movie called Turtles All the Way Down that I directed for HBO Max and it will be out early next year.

JN: You are both on fire. Does it finally feel like a better time for women in the industry now?

HM: I feel very fortunate that I am doing this at this particular time when it is more commonplace to be hiring female directors. It is still a benefit in the zeitgeist and that makes me happy. That being said, we’ve got to work for every bit of it.

MI: This is all really new for me so it still feels surreal. Don’t Make Me Go is my first movie and now I have some other projects. I feel very lucky and really grateful.

JN: Was this the first visit to Chicago for you both?

HM: I filmed a movie here in Chicago that Kris Rey directed called I Used to Go There. That is how I met Jermaine Clement who plays Dale Angelo in this movie.

JN: It all comes together now!

Don’t Make Me Go is currently streaming at Amazon.com on Prime Video.