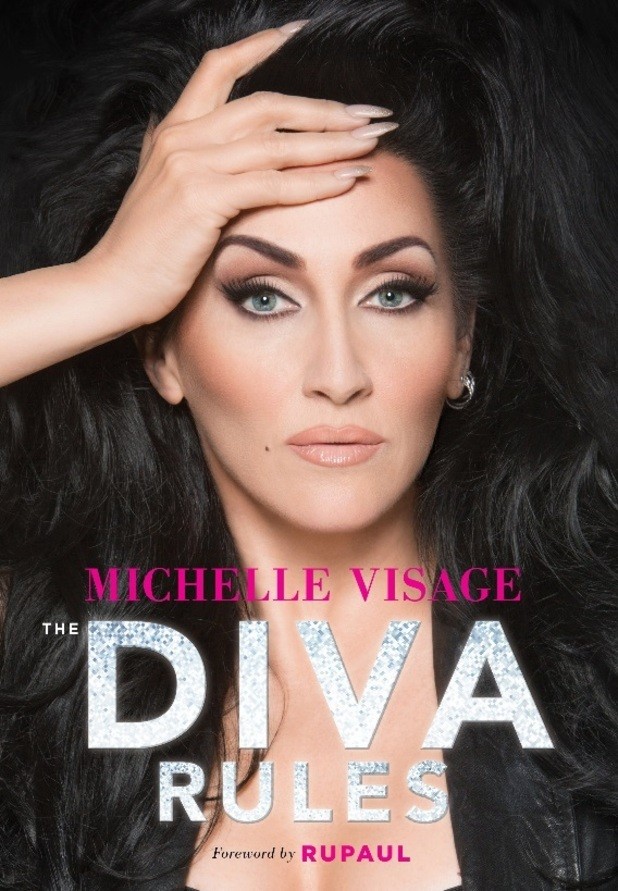 Michelle Visage has continued to be a gay supporter especially in the case of her best friend RuPaul Charles. That has led her from the group Seduction to appearing on The RuPaul Show to judging on Logo TV's hit RuPaul's Drag Race.

She competed on the 15th series in the UK of Celebrity Big Brother this past January where she lasted until fifth place. She is releasing a new book called Diva Rules and returns as judge on the eighth season of Drag Race.

We talked to her at recent appearance at Roscoe's and here is what she said...

JN: (Jerry Nunn) Hi, Michelle. We have done several interviews in the past but this is the first time in person.

MV: Thank you. It is my '80s throwback with crimped hair.

JN: Last time I saw you was that the Chicago airport where security was searching you. I thought, “She's not hiding grenades in her boobs!”

MV: It is because I am really high maintenance and won't walk through the microwave that fries your body. I always request a pat down. It is fun first thing in the morning...

JN: You have been judging on RuPaul's Drag Race for five years now.

MV: Yes, I start on season three and now it is season eight.

JN: How has the ride been?

MV: Amazing. I am so grateful, blessed, and honored that I continue to sit by my best friend's side and judge some of the most talented people I have ever seen in my life. It is gift.

JN: You get to travel around with some of them like being here today in Roscoe's.

MV: I tend to travel alone but I get to perform with them and it is fun. Tonight I got to spend time with Katya, whom I am never done a gig with.

JN: Do you ever want to go back and time to change something you have said during judging?

MV: No, because I stand behind what I say. If I don't want it to be out there then I won't say it. I do know how to hold back. I know it doesn't seem like it. I am not out to hurt somebody. I am out to call attention to certain things but I am also out to make people laugh with my delivery and style of bluntness.

JN: When do you start filming season eight?

JN: Have you had a favorite celebrity guest judge?

MV: There have been a lot of judges. There are special ones that I can't believe I have met. There are some I have had lasting relationships with like Kristen Johnston and Kat Dennings and Ross Mathews. Ross was my favorite for years so I am glad he is part of the family. I have stayed in touch and connected with many over the years. I am very lucky that way. Some that you don't expect to connect with you will wind up loving. The ones that you look the forward to the most will sometimes let you down.

JN: I spoke to Perez Hilton about Celebrity Big Brother. How was that experience for you?

MV: I'm sure he had different words to say about it than I did. I think we had different experiences. I was a huge fan of the show and still am. He had never seen it. He went in for a different reason. I went in hoping to win and wanting to play the game because I love the show. It was an intense experience that is for sure.

JN: Are you competitive?

JN: If you could makeover a celebrity who would it be?

MV: I think it is about individuality so I don't have a sense to tell someone they need a makeover. One example I would give is Mariah Carey. She has been the same for so long but I bet she is thinking, “If it ain't broke then don't fix it.” She is dated but I love Mariah for that. Everyone goes through their evolution and I go through mine and you go through yours.

JN: That is a good point about Mariah because she unlike Madonna who has changed over the years.

MV: Mariah has stayed the same. She found a sweetheart neck gown and stuck with it, whether it fits or not. That is the beauty of Mariah. I really do love her.

JN: Talk a bit about your podcast.

MV: It is called What's the Tee? with Michelle Visage. It is basically Ru and I sitting at Ru's kitchen table shooting the shit about life and what makes us tick and what we struggle with. We interview people and it is just friends talking. It is about our struggles, successes, and sharing our stories.

JN: You have a new book.

MV: Yes, The Diva Rules! It comes out November 10. It took me two years to write this thing. I forget what is in the final copy so I am rereading it so if I do an interview I don't want to quote something that didn't make the cut. It has great pictures. Chronicle Books is a wonderful book company. I love how everything represents who I am. There is sparkle and a makeup section. People can order it now on Amazon. I am very proud of it. When you pour your heart and soul into something it feels like you are giving birth. It is not an autobiography in the sense that I am talking about my life but more about my journey as to where I am now. People told me I would never make it. I was staring in the face of adversity and did it anyway. I chronicle it through the years. It is about finding your strength.

JN: RuPaul has written several book. Did he give you any advice?

MV: I got advice from Ru. I got advice from Kristen Johnston and James St. James. I think Ru gave me the best advice when he said to talk into a recorder and transcribe it. That is what worked for me. I just talked. Out of the talking I listened to it found what was cohesive. It all came together.

MV: I think you have to in this day and age. You no longer wear one hat. In the career world we are downsizing. That means the one person that will keep their job will do three or four jobs for the same amount of money. You have to be that way these days.