We do have a unique story and we can finally do something for our community to show people the inside of a same sex family with all the good and the bad. 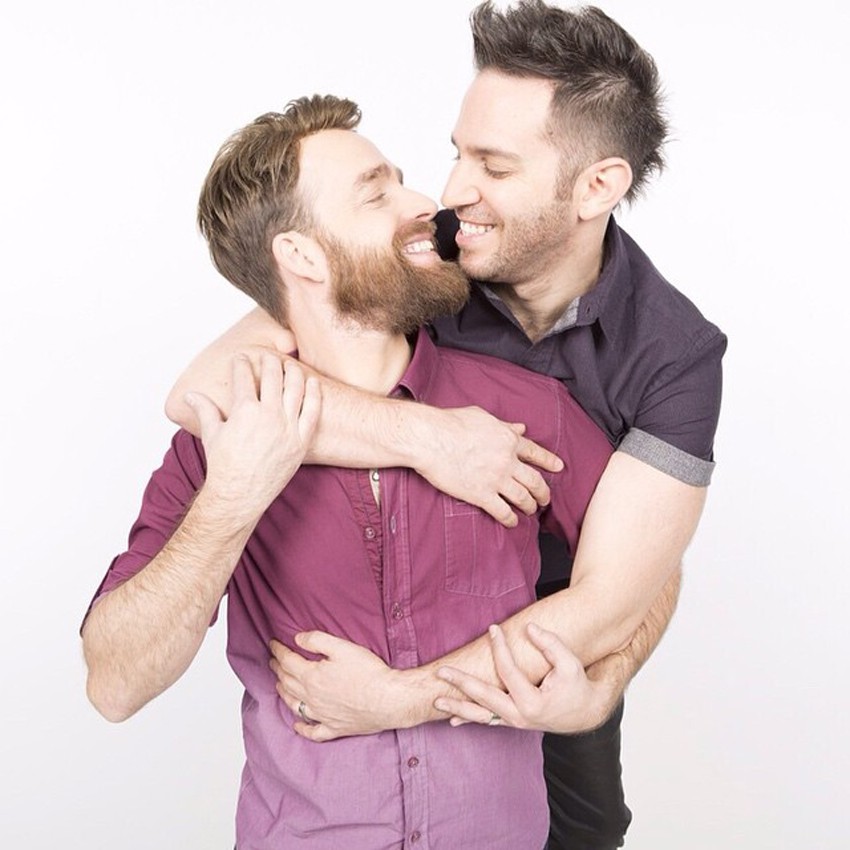 An interview with the gay couple from AOL's Connected series

You may not know the names Eli and Ido Bendet-Taicher, but once you meet them and their young daughters on the AOL series Connected you won’t forget them. A same-gender Israeli couple, Eli and Ido are the gay faces of the series which features multiple (mainly straight) storylines. Still mourning the loss of infant daughter Isli, who passed at away eight days old, the couple effortlessly demonstrates the many ways in which same-gender couples, especially those raising families are not all that different from their mixed gender compatriots. I spoke with Eli and Ido about the show and their family in May 2015.

Gregg Shapiro: I’d like to begin with some basics, such as how did you meet?

Eli Bendet-Taicher: We are originally from Israel and we met in Israel. It was in 2003. There’s an Israeli dating website that all of the gay Israelis are going to. It’s not an old version of Grindr or anything. It’s like OKCupid or Match.com. It started as a hook-up kind of thing and it grew from there. We met again and again. We sensed that there was something there. We moved in together six months after we met. Everything moved very fast [laughs].

GS: In what year did you get married and where?

IB-T: We got married in 2007. We did a very large event in Tel Aviv just before we moved to the States. Afterwards, we got married two more times; in Canada in 2009 and then one more time in 2011 in New York. We got married in Canada because the event that we did in Tel Aviv was more of a festive event than an official (one). We couldn’t go to the state registrar afterwards and have our marriage certified. It was a nice and big event, but not official. When we wanted to make the event official, we had to go to Canada and get married there and then bring certificate back to Israel and have the authorities license us as a married couple. In 2011 when New York state made gay marriage possible, we said, “What the heck! Let’s just have a casual wedding here in New York. This is where we live.” We went to City Hall and got married there.

EB-T: It was like we woke up in the morning and we said, “Let’s get married at City Hall because we can!” We went there and grabbed a witness from the crowd. We were in and out of there in five minutes with our certificate.

GS: What brought you here to the states in the first place?

GS: What was involved in the process of becoming part of the AOL series Connected?

EB-T: Connected is originally an Israeli format. We were huge fans of the show. We heard about  the American version coming up. We have a friend who is one of the executive producers of the show. They were looking for a same sex couple to be a part of one of the stories on the show. They interviewed a few couples, a few families. She (the executive producer) came here one day, because her daughter is the same age as one of our daughters and asked us if we would do it. The initial response was, “No way. We’re not going to do this.” But she said that we had such an inspiring story and that’s what hit us. We do have a unique story and we can finally do something for our community to show people the inside of a same sex family with all the good and the bad; but mostly to show that our family is like any other family.

GS: Your presence does go a long way in showing how gay couples who are also parents aren’t that different than anyone else. Does it feel like a big responsibility to be the gay couple in the series?

IB-T: Not at all; because we stayed true to ourselves throughout the filming of the show. We didn’t change anything about ourselves. It was important for us that we introduce ourselves as a family as we really are. I think you definitely hit the point. I don’t think our story could be related by only gay individuals or families. I think we have many sub-stories to tell that would be of interest to other populations, such as people struggling with getting pregnant or families raising young kids or anyone who has had a loss in their family. For us, what was important was to stay true to ourselves and I think the end result is very honest and interesting.

EB-T: I don’t know if you noticed this, but out of all of the other cast members, we are the only typical kind of family. Two parents, married with kids. We are the typical family on the show. We experience every moment that a family goes through when raising kids, going on family vacations or trying to get pregnant. These are the same issues. It was important for us to show that the LGBTQ community comes in all shapes and sizes. People may have misconceptions about what’s really happening in same-sex families. We wanted to show that there really is no difference.

GS: It also helps that the two of you are easily the most likeable people in the series. Has anyone else told you that?

EB-T: We appreciate that. It’s cute that you just said that.

GS: The thread that connects almost all of the stories in the Connected series is children and babies. Did you both always want to become parents or did one of you have to convince the other?

IB-T: This was the easiest decision that we made. When we met we were in our twenties. Very quickly we started talking about how we get to the next phase and have kids. We were on the same page from the get go. It was only a matter of how we can do it.

EB-T: Ido and I hear this a lot – we’re the straightest gay couple ever – in the sense that we both wanted to have the same stages in life like every other couple. To get married, to have kids. The same as if I was married to a woman. We just needed to find out how to make it possible with all of the obstacles and the legal stuff. We saw ourselves like any other couple. It was a given for us.

IB-T: Eli and I were also on the same page when it comes to having a large family. We would love to have more kids, if possible.

EB-T: Milo’s school (application process) was more nerve-wracking because it had huge consequences if she didn’t get accepted to school. We had a lot on the line.

GS: What’s next for the Bendet-Taicher family?

EB-T: There are so many things that we want to do. We want to have more kids. We want to keep inspiring people with our story. This is what we had in mind for the next stage in our lives.

IB-T: We would love to continue advancing our careers and spend as much time as we can with our daughters and make sure that they are happy and that we have nice experiences and memories. As Eli said, if we can find platforms or opportunities to inspire and continue inspiring others we would definitely consider them.