Made in the Jade: An interview with dance diva Jade Starling

I don’t know what I would do without my gay fans. 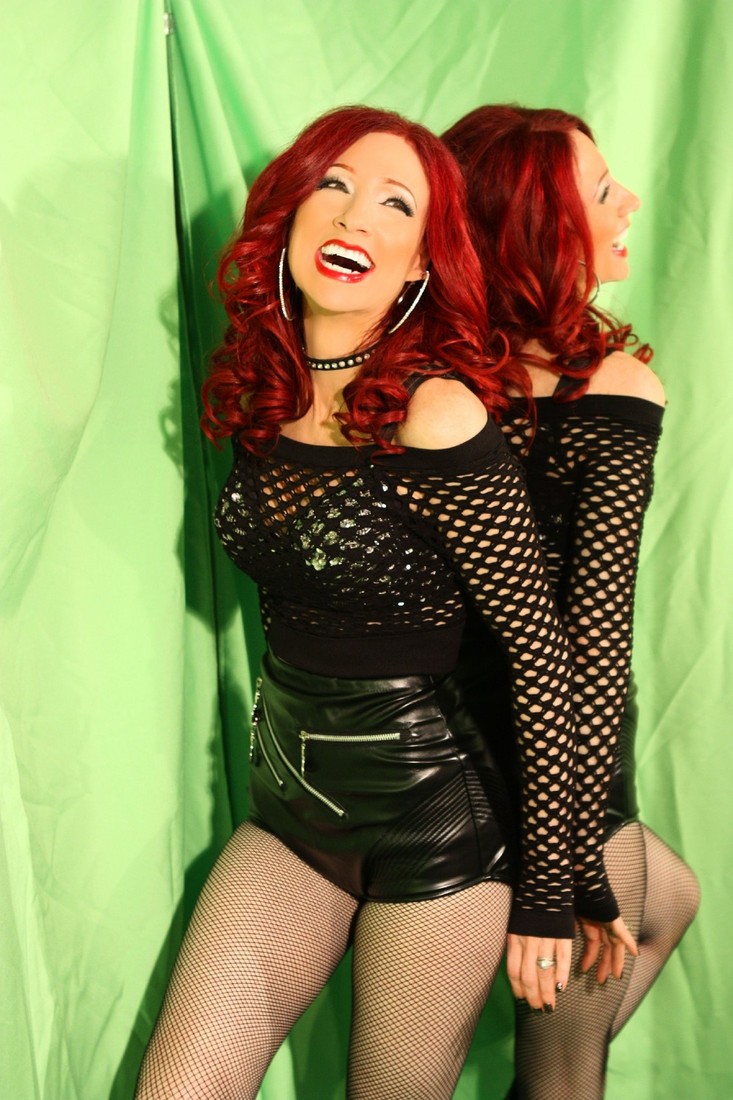 With her ruby-red tresses, self-described “Jersey girl,” perfectionist and gay activist Jade Starling, is the daughter of a jazz guitarist father and a piano-playing mother, and the sister to a brother who played rock guitar. Starling’s name might not be immediately familiar to you, but “Catch Me I’m Falling,” her late 1980s hit single with her band Pretty Poison is sure to ring some bells. Whether you were dancing to it at the time of its release or became aware of it while perusing YouTube or stumbled on it on a retro radio station, the catchy “Catch Me I’m Falling” helped establish Starling (and Pretty Poison) in the public consciousness.

Fast forward about 25 years and Jade Starling has finally gotten around to releasing her first solo album, the captivating Captive (jadestarling.com). Working hard and playing hard, Starling wants it all and gives it all on this EDM dance-floor workout. Tracks such as “Everything In The World,” “Insomniak,” “Love of a Lifetime,” “Spontaneous” and “Subliminal” are sure to keep you and your friends dancing all night long. In September, Starling’s hit single “Better and Better,” rose to the number three slot on the Billboard Dance charts, making it her highest chart ranking since “Catch Me I’m Falling,” nearly 30 years ago. I recently had the chance to speak with Jade about her career.

Gregg Shapiro: Jade, as a pioneer in the realm of electronic dance music, from when you were in the `80s electro-pop group Pretty Poison, what does the current popularity of this kind of music mean to you?

Jade Starling: It’s a full-circle moment for me. We’ve been doing EDM (electronic dance music) since day one. Now it’s a genre. We actually have a place where we fit in and we’re accepted in this world. As you said, people consider us pioneers and that’s such an honor. I don’t take that as an insult in any way. I feel honored and comfortable now that I have this presence in the dance music world.

GS: Was the name Pretty Poison a reference or homage to the 1968 Tuesday Weld and Anthony Perkins movie of the same name?

JS: How did you know [laughs]? You really did your homework! It was partly that and partly it seemed apropos. We’re pretty but we’re edgy and dangerous. We’ve got the allure. We lure you in and hold you captive with the music [laughs]. Pretty Poison was a perfect name for us. You know, I’m still doing Pretty Poison. I still tour as Pretty Poison. I do my solo thing and I do Pretty Poison. Sometimes, it’s Pretty Poison featuring Jade Starling. It’s like Blondie and Debby Harry. She was Blondie. She was Debby Harry. Whatever it is, I’ll take it [laughs].

GS: Philadelphia is probably best known for the soulful sound of the artists on the Philadelphia International label, including Patti LaBelle, Harold Melvin & The Blue Notes, The O’Jays and also Hall & Oates. Was it a challenge to get your style of music heard by people in your hometown, both in the early days and now?

JS: Actually, in the early days we had a huge cult following. People that loved that music, coming up through that era, they were hardcore. They would come out to all the shows and buy the independent releases. I would say that it was probably different for us because we were sort of in our own genre. Whereas everything that was coming out was soul and rock. A lot of rock came out (of Philadelphia). We actually did a hybrid or rock and dance and soul and R&B. I think people were really connecting to the music. It started to go outside the area – in New York and the tri-state region. It started to seep through on the West Coast and in Miami. In Miami, our first record, “Nighttime,” which came out before “Catch Me,” exploded. It was a huge independent dance record for us. As we realized where the core interest in our music was, that was the direction we moved in.

GS: You have to recognize where your markets are and then serve them.

JS: We used to bring a live percussionist and people were really digging the whole live dance thing. The energy of the audience, everything back then, brought us to where we are now. I feel that this is direction and this is why we have pursued it. A lot of people chase their tail. “This isn’t working! I’ve got to try something else.” You have to stay true to who you are. If you’re passionate about it and you love what you do, your audience will love what you do.

GS: Captive is technically your first solo album. How did you know it was the right time to release an album under your name?

JS: It started off that we were going to do a Pretty Poison record. We had written a lot of songs. We met Lee Dagger of Bimbo Jones a couple of years ago. He said he was a huge fan of our music and we ended up collaborating. We wrote about 12 songs with him, along with Whey Cooler, my partner from Pretty Poison. The new direction in which we were going is so relevant to what’s going on today. Whey insisted that we not call it Pretty Poison, that we call it Jade Starling. He said, “You should have your solo album come out now. This way people will give it more of a non-biased listen.” We were working with outside producers and songs, collaborating with these “Euro” guys and it gave it a fresh new life. I’m so happy to be reintroduced to the industry with my first solo album People have taken to it. It’s getting amazing reviews. It allowed us to open up more as songwriters and to take some risks.

GS: You’re not doing it under a name that people already know, a band name. This is a new name for people who will recognize it from the band, but it’s its own entity.

JS: Exactly. I think people tend to have a pre-conceived notion when it’s a group, particularly when it’s a group that’s been around for 20-some years. This way it’s a fresh new idea. I’m coming out as a solo artist. I’m born again! I worked with some great songwriters, too. I worked with Franck Dona from France and with Lazslo, originally from Hungary now a resident in Las Vegas. The new song, “Better and Better” is a collaboration between me, Whey Cooler and Lazslo.

JS: Couldn’t do it without him! That’s my partner in rhyme.

GS: How did you and Whey first meet?

JS: We’ve known each other since we were kids. He had a rock band, a garage band, and they were looking for a singer. They were actually looking for a male. I said, “Give me a shot.” I auditioned with Led Zeppelin’s “Whole Lotta Love” and some classic rock stuff. They were like, “Whoa! This girl can really belt one out.” We became very good friends and we started writing songs. It just happened. It was very natural how the songwriting process with us would just flow. Hundreds of songs later it evolved and we’re here to tell the story that we’re still working together. I think when it clicks, it’s magical. It ebbs and flows. There’s periods where we write (snaps her fingers) 20, 30, 40 songs in a row. Then there a  couple of months when it’s dry. I feel like a song that comes naturally is the one. When the hook comes naturally, those are the best ones.

GS: What can you tell me about your contribution to the songwriting process of the songs on Captive?

JS: Whey is a multi-instrumentalist and producer. He also helps with some of the lyrics and melodies. He’s very good with melody and hooks. I would say that for a majority of Captive, it was a huge collaboration. We bounce a lot off of each other. He is more the producer. He produced all the vocal performances on the record.

GS: Dance music remains a popular component in the LGBT community. When did you first become aware that you had a queer following?

JS: From day one. Honestly! Even as a child, I had a gay friend down the block. He used to paint his fingernails and toenails. He then became a club owner out on Long Island. I think I always gravitated to the LGBT community because there were no criticisms and I didn’t feel judged. I felt like I could totally be myself. As things grew and evolved, we started doing more gay clubs. Even in the early days, before we hit it big, those were the clubs that were booking me. They were loving us and they were following us. Ten or 15 years into it, these were hardcore fans. They’re still coming to the shows! They come up to me and say, “I’ve loved you since the first time I heard you.” “I love your music!” “You’ve helped me get through hard times and you helped me come out.” There are so many amazing connections that I’ve had to the LGBT community. I have taken a stance and I have done a lot of charity events every year. These are my people and I want to give back. They’ve given me so much without even knowing it. It warms my heart. I don’t know what I would do without my gay fans.