Multi-faceted: an interview with Diamond Rings 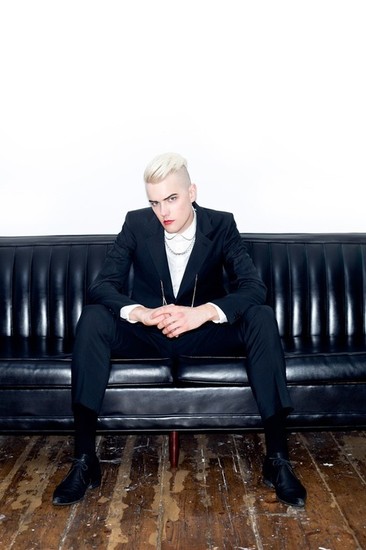 The autumn 2012 release of EDM act Diamond Rings' second disc Free Dimensional (Astralwerks) capped off what turned out to be a dazzling year for LGBT music. Diamond Rings (aka John O'Regan) delivers on the promise of his 2010 full-length debut Special Affections by generously expanding his sound to incorporate raps and a more concentrated club style and sound. The beats are more deliberate on songs such as "I'm Just Me" and "(I Know) What I'm Made Of," making them the ideal selections for dancing the night away. (Diamond Rings performs on July 23 at Metro.)

GS: (Gregg Shapiro) After the positive reception with which Special Affections was met, was it daunting to begin working on the follow-up, Free Dimensional, or did the momentum help?

DR: (Diamond Rings) I think the latter. From the outside it always appears that artists make an album and then they go on tour and they start the next album after that [laughs]. But, I try as best as I can to always work and to always write and to always have a new song or melody in my head. I had a bunch of this album written while I was still touring the last album, so in that sense it's never quite as intimidating. I never really think about my process in terms of albums as much as I do songs or choruses or verses. I'm just always trying to make the next great chorus or the next great song. It's only when you step back, look and say, "oh my god, I've got like fourteen, fifteen songs, I can put these on an album," then I start to worry about making the album.

GS: Were those newer songs from Free Dimensional included in live shows when you were touring for Special Affections?

DR: Yeah. When I did a tour with Twin Shadow last summer in America then went over to Europe in the wintertime and was performing "Runaway Love" and "All the Time" every show as a solo artist. I'm with a band now. For sure, I always like to try new stuff on the road and see if it resonates and connects with the crowd.

GS: "Everything Speaks," which opens the disc, retains the spirit of Special Affections. Was it your intention to ease listeners in slowly for the sonic changes that lay ahead?

DR: Yeah, always. On Special Affections, too, the opening track does a similar thing. You get kind of one opportunity as a pop artist to do something with it that is left of center or weird. And if you don't kind of get it out of the way [laughs] at the very beginning it's hard to do later – on track seven we're going to take everyone on a mystic voyage. Yeah, I think it's really important, both on the live show and on the record, to have a moment at the outside that makes people stop and take note and really try to soak in everything. That song has that effect, or at least I intend that effect. Lyrically, the concept of "Everything Speaks" is this idea that as an artist the idea of being open and fully cognitive to everything that's around me – everything in the world and soaking in all the feelings and inspirations and just being in tune.

GS: There is a more fleshed out quality to the arrangements on songs such as "All The Time," "I'm Just Me," and "A to Z." Did these songs begin with that larger feel to them or did they begin like songs from Special Affections, a little more stripped down?

DR: A bit of both. I think part of this album and the way it sounds is just, the work I've put in to develop my own ear and my own sensibility and improving as a producer and songwriter. The second most important difference between this record and the last one is that my co-producer Damian Taylor, who had a tremendous hand in helping to shape and develop the sounds. He's a really skilled listener and musician and artist in his own right. Definitely this one was a matter of starting small and getting big and then scaling back a little for the final mix [laughs]. The goal with every song was to push them to the point where they became a little much and then scale back. I think every artist has to find and define their own kind of threshold. It's really easy to just keep adding and adding and adding – at some point that becomes detrimental success of the work.

GS: Speaking of those kind of artists, in the song "A to Z," you make reference to the Culture Club's "Kissing To Be Clever." Do you consider Culture Club and Boy George to be an influence, and if so, in what way?

DR: Definitely more I think as an aesthetic one. They've definitely got some serious jams [laughs]. I own a bunch of their records. For sure, someone like Boy George has a look that's unique and expressive that ultimately feels like real and in some way honest. I think as a performer – that's what I strive for. These days anyone can throw on some crazy outfit and look weird. It's great to be weird, but it's also great to actually find your own voice and find your own way of expressing yourself that is unique and not just about shocking people just for the sake of the shock.

GS: Many of the songs on Free Dimensional, including "I'm Just Me," feel very personal. Would you agree that they are more personal than the first record and care to comment about that?

DR: I don't feel this record is any more personal than the first. I do feel though that the overall feeling on Free Dimensional is far more celebratory and outward looking. The first record was I guess you could say introspective. It was a record very much about wanting to become a musician and wanting to become a performer. Most of those songs were written before I had a record deal, an indie record deal, let alone a major record deal. This one, from the get-go, I had been signed to a great label in the U.S. in Astralwerks. Through them I had the opportunity go see a bunch of great pop artists, such as Kylie Minogue and Katy Perry. Being in that company made me excited, but forced me to step up my game. I think one of the things that great pop music does, that enables it to connect with people, is that it expresses an attitude that's open and inclusive and confident. That sort of confidence is what I wanted to translate with this album.

DR: Lyrically, I always try to have fun with things like that – putting a double meaning. I definitely had those moments where you travel across four states and you wake up and are like "where am I?" My last tour of Europe we drove through Belgium like six times, but we played there once. It's like, "Oh we're in Belgium again" [laughs]

GS: Are both the wanderlust and the uncertainty location are by products of being on tour?

DR: Yes, definitely. It's a reoccurring theme in this album. A lot of the songs I was writing on the road. I write about me and I write about what I'm experiencing. I spend half the year away in different places and so does my band, so does my manager, so does my whole team. So a lot of these songs I'm writing are not only for me, but also for them. A track such as "Day & Night" is meant to be an uplifting, anthemic experience for everyone in my touring party. It's cool to have those moments where you can celebrate and embrace what you're doing. We've become like a family on the road.

GS: Another new Diamond Rings element is the raps…

GS: Yes, I did. They can be heard on "Hand Over My Heart" and "Day & Night." What made you decide to do that as opposed to making them sung?

DR: It's probably two or threefold. For starters, I'm really envious of the way rap is, I guess. It gives you a platform to say much more in a really condensed amount of time. It's a style that embraces word play and humor and metaphor and fun a lot differently than a sung kind of lyric. There's a real pressure writing sung lyrics, to be poetic and have a grand meaning or metaphor behind it. Whereas with rap, you say so much and you can say whatever you want and it doesn't matter. It was really liberating in that sense. Beyond that, it's more just what those songs felt like they needed that to me. That's what motivates anything that I do.

GS: You sing in two distinctive vocal styles. On songs such as "Put Me On" and "Everything Speaks," you employ your deep bass vocals, while on "All The Time" and "(I Know) What I'm Made Of," for example, you sing in a higher register. How do you decide which works best for each song?

DR: I'm glad you noticed that too, that's really cool. I'm really happy with how my voice has sort of matured and developed over the years. On this album that's probably what I'm most proud of, that I feel in control over my own voice, like any artist strives to do. But, I credit Damian, my co-producer with a lot of that work. He really pushed me to discover my own limitations and my own abilities as a singer. We spent a lot of time arranging songs based on what key they should be in and how I should be delivering them in a way that I think also supports the lyrical content, too. "Everything Speaks" is enhanced by that kind of gravity that the vocals allow. Whereas "All The Time," called for a vocal that feels lighthearted and fun [laughs]. It's about getting in tune with what the message of the song is about and finding the best way to convince people of what I'm saying and enhance the lyrics.