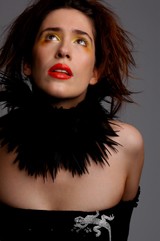 With a voice both deeply mysterious and profoundly comforting, British sensation Imogen Heap creates electronic soundscapes that are intense, personal, and musically sublime. On her new album, Speak for Yourself, which Heap wrote, recorded, performed and produced, the singer brings listeners on a thrill ride of emotion, from the haunting admonishment of “Hide and Seek,” to the beat-driven, romantic trepidation of “The Walk,” to the maniacal rock-and-roll joy of “Daylight Robbery.”

The album has had a stunning start in the U.S., where it debuted at #2 on Billboard’s Top New Artist Chart. Heap has been garnering fans in a myriad of places over the last couple of years—the song “Let Go,” recorded with her Frou Frou band mate (and Madonna and Bjork producer) Guy Sigsworth, was included on the Grammy-winning soundtrack to Zach Braff’s Garden State. And “Hide and Seek” was prominently and emotionally featured on the final episode of last season’s The O.C. Recently, Heap contributed the closing track to the hit movie, The Chronicles of Narnia: The Lion, The Witch and The Wardrobe.

Look for Heap to be touring the U.S. in early 2006. Here, the singer talks to her gay fans about the joy of working on her own, the musical uses of a frying pan, and her feelings about gay weddings in the U.K.

CP: You had a lot of success with Frou Frou, particularly since Zach Braff included the song “Let Go” on his Garden State soundtrack. I think some fans might want to know why you decided to go out on your own instead of doing another album with your Frou Frou partner, Guy Sigsworth.

IM: It may come as a surprise, but Frou Frou was really like a kind of little holiday from my own work. Guy and I, we have always worked together, and then over the years, it became clear that we wanted to do a whole album together. It was very organic and spontaneous—just one of those wonderful things that happens. But there was never a mention of a second record from either of us, and not uncomfortably. We’re just both kind of free spirits. I love to work with a lot of different people, but I was also just gagging to see what I could do on my own. But I’m sure in the future, Guy and I will get back together to do another record, or to record a few songs together.

CP: Let’s talk about your new album Speak for Yourself. The songs, for the most part, all describe extreme emotional circumstances. You, as the protagonist, are very in the moment, whether you are experiencing fear, sadness, joy, or anger. And making them even more immediate, each song is really you speaking either to yourself or to another person, usually with some urgency.

IM: You know, lyrically, Guy had a great influence in the way I write lyrics. He made me really aware that somebody else would actually be listening to the words I wrote. In a way, as my partner in Frou Frou, I would be singing lyrics to him, just by the very fact that he was on stage or in the recording studio with me. So, when he was listening to me sing, I got a sense of what a lyric sounds like when it is “said” to another person. That really appealed to me—that the listener at the other end of the radio, or on their iPod, would be listening to me speak directly to them.

CP: I would think that your fans would feel closer to you, having you speak to them directly like that. But, are the lyrics actually written about people in your own life?

IM: Most of the time, they are kind of like my secret messages to my friends or my boyfriend or my mom or my dad. I would never tell them that these songs are about them or which specific lyric is about somebody. Often, when I sit down to write a lyric, it is in the heat of the moment, and something has just happened.

CP: Did you really like working on your own?

IM: It was very exciting. I really had a great time for the most part, as much fun as one person can have in a room full of computers and keyboards. There were times when I get so excited by certain things that I was working on that I just put on my fake disco lights and danced around the room in the dark.

CP: What attracts you to electronic music?

IM: I just love crafting and shaping sounds. Actually, many of the sounds that I work with start off as organic instruments—guitar, piano, clarinet, etc. But I do love the rigidity of electronic drums. For this record, I would record live drums, and then I would spend a day editing them to take the life out of them. I like to breathe my own life into these sounds, and I do try to keep the “air” in the music. Some people think electronic music is cold, but I think that has more to do with the people listening than the actual music itself.

CP: Do you ever use sounds from everyday life in your music?

IM: Well, one night, I decided to record my boyfriend and me eating dinner. I wanted to get the sound of the room. So, on “Hide and Seek,” for example, you can actually hear the sound of a frying pan.

People might think it sounds like rain, but it’s a frying pan. Certain sounds give the music a width and a space, and that’s important.

CP: Are you aware of having gay fans, either in your audiences or the people who write to you on your web site?

IM: Yeah. I haven’t had any specific “You’ve helped me come out” emails, but I’m very aware that I have a strong gay following, and I’m very happy about that.

CP: Do you have any sense of why that is?

IM: Maybe because they have extremely good taste [laughs]. Maybe it’s the flamboyancy of the music; it’s kind of edgy and exciting and free. I don’t really know. You tell me.

CP: Well, it’s kind of an impossible question to answer, but it’s always good to get people’s thoughts on it. So, let’s talk about gay marriage. You now live in a country (England) where gay people are having legalized weddings.

CP: Do you have any friends that have gotten married?

IM: I’ve been to two gay weddings but that was before it was legal. Nobody’s invited me in the last couple of weeks since it was announced.