I think the possibilities of this show are limitless. 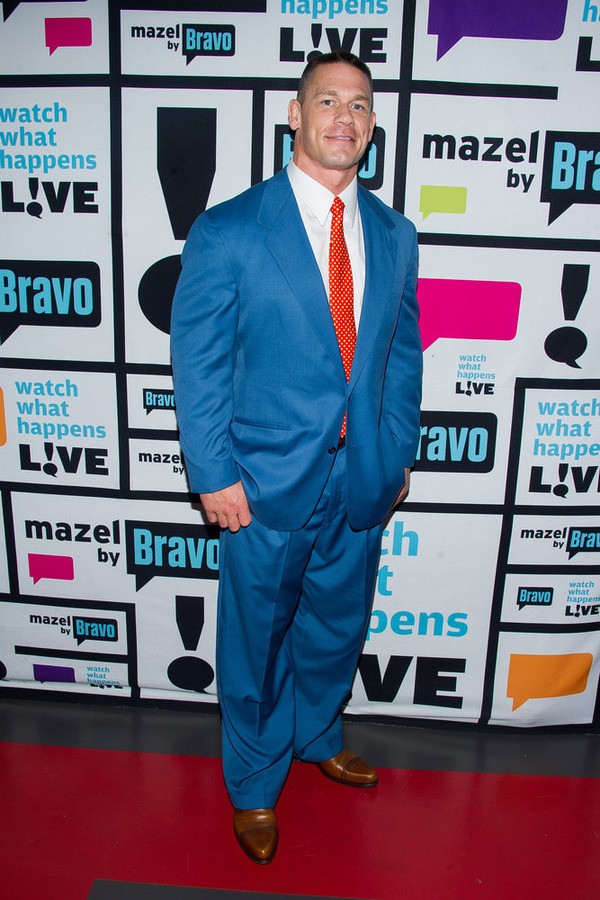 From WWE to American Grit John Cena is now a host

Hunky John Cena didn’t stop at wrestling for the WWE but continues to expand his empire with rapping, acting, and reality television hosting.

Cena's television appearances have ranged from Psych to Parks and Recreation, while movies included two hits last years with Trainwreck and Sisters.

His latest gig is playing host on the new show American Grit. Here, Jerry Nunn talks to John Cena about the new job along with his connection to Chicago.

JN: (Jerry Nunn) How do you feel the first episode of American Grit went?

JC: (John Cena) I think what you saw in the first episode was a testament to what the show is. The show is about heart. So often you see shows about strength, and so often in the athletic competitions, pure athleticism is the one measuring stick. Who can jump the farthest, who can run the fastest, who can lift the most?

I really was happy with the turnout of episode one.  I still feel, myself, that Chris could have benefited from more time on the show.  But, man, what a statement it makes and that’s what I like most about the show, there is no typical mold for success.  It’s all about digging deep and finding something inside yourself that you didn’t know you had.

JN: What from your past work with the WWE has help you adapt to your hosting duties on American Grit?

In the WWE we are constantly performing. It is a constant ever-evolving episodic television show that is for the entertainment of the masses.

I guess the biggest thing that I took away from this was perspective and understanding my piece in the puzzle. My piece is to be a vehicle to move the competition from A to B to C. It is not to just showcase my talents. The talents here are in the competitors and the talents here, and I think the stars of this show, are the military cadre.

I wanted my vision of the show to show what these elite men and women can do with a group of civilians and how they can evolve over the course of this journey.  And, I think the viewer will really become attached.

JN: Do you think we could see a special episode of American Grit with WWE Superstars in the future?

JC: I think the possibilities of this show are limitless. I really do because of what it is based on.  You will be put in a certain area of the earth, you will work with a team as best you can, and at one point or another, your resolve will be tested. Any single human being can fit in that category, so I really think that the possibilities of this are endless. I think it would be unbelievable television having a WWE version of American Grit.

The thing that I learned the most, the thing that I’m most proud of this show is all the good that happens within it, really honestly, I remembered the very last, when we filmed the finals and I’m walking away saying to myself, either America is going to be ready for this or they’re not because it is just unlike anything you see on television because there is no voting.

The backstabbing manipulation is a waste of breath because it is not necessarily about biggest and strongest, competitors are immediately downsized to whoa, I am going to have to just ante up and do my best. There is no unholy alliances because it doesn’t move you forward at all. It is just, all of it is on your team, how well you function as a team, and on you as an individual when you are called to face the circus, as we call it on American Grit. You just know that you’ll have to get to a point where you extend beyond yourself.

For people who have to ring out it is disappointing, but for people who can survive the circus, the bond between teammates, the bond between cadres, and I think looking inside themselves, and Goldie, what a great example. She said, and I quote, “Thank you for believing in me.”  It was so great. Just moments like that that make me happy. That’s what I really love most about the show.

JN: With your appearances in movies like Trainwreck and Sisters are you extending the WWE brand or branching out into something new?

JC: I can’t tell you how many people, especially Trainwreck is pretty much hitting the movie channels now, like how many people come up to me and recognize me from Train Wreck or Sisters instead of WWE. The mission statement is to reach new audiences and you take the steps necessarily.

Those were wonderful opportunities that I’m really thankful for them. My goal is to change the perception of what we are, I have to stay in allegiance with the brand. Not only to complete my goal but it’s because what I love to do.

I will hopefully be doing more of American Grit. Hopefully, you’ll see me more on the Today Show. If they do a sequel to Sisters, or Train Wreck, or Daddy’s Home, or any of that stuff, I would love to be involved with that. But, at the same time, my heart lies on the canvas of a WWE ring and that will never change. I will find a logistic way to manage all things.

JN: Where you involved with the casting of Tony Simmons from Chicago in American Grit?

JC: I was not and I enjoy that, and I enjoy the fact that the military cadre will not either. Because very similar to basic training, the GIs have no idea who enlists. They get off the bus and they motivate. I really like the fact that every single—what I was told and what the cadre was told, information was given to us. We learned a little bit about the people; we were able to study a small dossier. Every dossier said the same thing; these people all will never give up.

So, it was great, on the very first day, as you saw on the show, me reminding them that they should be accountable for their words because their words will be put to the test.

Now, what I can tell you about Tony from having spent time with him, he is a fantastic human being and I have chills on the other end of the phone saying that.  He not only makes me proud, he not only makes the military cadre proud, he will make America proud, and he certainly will do the Windy City proud.

JN: When are you coming to visit your fans in Chicago?

JC: I’ve been to Chicago many times. There’s a WWE event coming up very soon in Chicago. I was asked on an interview, it was a Center Stage for the YES network, what is the favorite place that I like to perform. It absolutely without a doubt is All State Arena in Chicago, Illinois.

Although, Madison Square Garden is the world’s most famous arena and WWE has very strong roots there and always will, and that arena has a special place in my heart. There’s no denying the absolute mayhem that is the audience at All State Arena. It always has been, it always will be, it’s been like that since I had my very first match there in 2002. Ever since then it has been the loudest, most chaotic facility that I have ever stepped foot in. It holds a special place in my heart because that’s the city that my career started.

I owe a lot to Chicago, I’ve had wonderful moments from a WWE perspective in Chicago, and believe it or not on a personal note, it’s where I went on the first date with the woman I love. I went to Gibson’s in Chicago and took Nichole out on our first date. So, both professionally and personally that city has a special place in my heart.