The good humor man: an interview with Justin Sayre

It’s a labor of love and a way to put a stamp on the development of the show and who we were then. 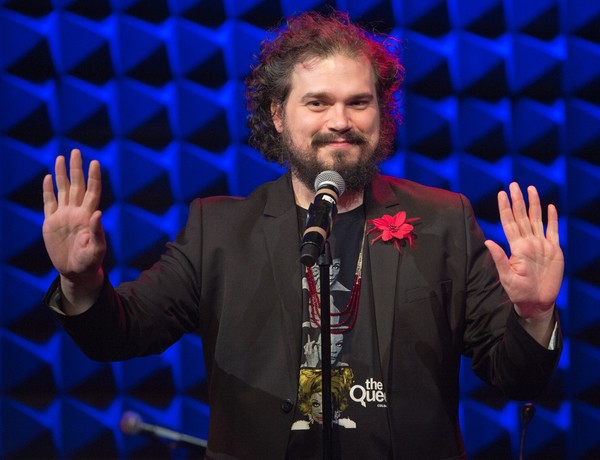 We could all use a good laugh right about now. Writer and performer Justin Sayre is our gay man for the job. A screenwriter for the raunchy and hilarious CBS sitcom 2 Broke Girls, Sayre is in the midst of an especially good year with the release of his debut comedy CD The Gay Agenda (internationalorderofsodomites.com) and the paperback publication of his debut young adult novel Husky (Grosset & Dunlap/Penguin , 2015/2016). The first in a series of Y/A novels by Sayre, Husky will be followed in the summer of 2017 by Pretty. Sayre’s The Gay Agenda  commits to record some of the highlights of his long-running comedy/variety show The Meeting* of the International Order of Sodomites. I spoke with Justin about the book and CD in early autumn 2016.

Gregg Shapiro: Justin, if you don’t mind, I’d like to begin by talking about Husky, your Y/A novel. Like the main character Davis, did you or do you have a Nanny and a Sophie in your life?

Justin Sayre: I had variations of them, but I don’t think I had those specific people, no. My grandmother, who I was very close to, and I think in some ways the character (of Nanny) is modeled on, was a very, very different woman and we had a very different relationship. I think that everything you write is an extension of who you are and your experiences. I see shades of experiences and things that happen in the book in my life, but they’re not closely linked.

GS: So then are you, like Davis, an opera fan?

JS: I am an opera fan, but not until I was older [laughs]. I was very into jazz, Coleman Hawkins and all that stuff when I was a kid.

GS: Would you say that including opera in the plot of Husky a subtle way to encourage young readers to listen to opera?

JS: Absolutely! Talking about shades of experience, I really like that there was an art-form that I was interested in as a kid that was different, that took me down different paths and exposed me to different things than was the standard of the time. That’s why I picked opera (for Davis),because not only would it reflect well on who this kid is and his emotional state, but I think there’s so much available to kids these days, with the internet and music being so readily available, I think it’s a great opportunity for kinds to expand their musical horizons and find new forms of expression; rather than limit themselves to what’s on the radio.

GS: Because you are a screenwriter and write for a sitcom, have you started to think about the possibility of a movie version of Husky, and if so, who would want to play Davis?

JS: [Laughs] oh, gosh! I keep getting asked that. We’re coming out with the second book shortly and I’ve already started outlining the third. It’s strange, because I write in multiple formats. I write for the screen and I write plays and I write books. Davis, to me, is a book character. I don’t know if I‘ve seen him on film yet. What I will says is that I like the kids from Stranger Things. I think they’re all unique. If [Husky] did become a movie I would hope that we could find a kid that was unique and filled a lot interesting space, rather than a kid that could act [laughs].

GS: Something I noticed in both Husky and on your CD The Gay Agenda is ease and comfort with the use of Yiddish words. For instance, you used “schlepper” in Husky, and made reference to “alter kockers” on The Gay Agenda.

JS: I would say that Yiddish is one of my favorite languages [laughs].I think I’m pretty much the only person I know who has a (learn) Yiddish CD so I can learn more Yiddish words. I love that it’s an organic language; that it’s a street language and it evolved from other languages and became identified with a community. It’s also onomatopoeic. You hear “schmuck” and you know exactly what it is. It sounds like what it is. There’s no other language in the world that puts it so frankly right in front of you [laughs]. I just love it.

GS: The Gay Agenda, your CD that I previously mentioned, has just been released. What does it mean to you to be able to bring The International Order of Sodomites to a larger audience?

JS: We’ve been doing the show in New York for about seven years. It’s been a great success. We’ve had a lot of fun doing it. The CD is like a “greatest hits” of what we did. It’s a labor of love and a way to put a stamp on the development of the show and who we were then. I also think it touches on what were the hallmarks of the show. It’s about community and looking a little deeper in a humorous way [laughs] at who we are and what’s going on around us right now. When we take it out there, I hope it becomes something that people go to and really enjoy. [Laughs] I hope they get a laugh out of it. But I also hope they take the sentiment of it with them, which is, “Yes, we can laugh at who we are. We are at that point. We can take ourselves a little less seriously.” In doing so, maybe we get some insight, rather than being precious about who we are.

GS: I hear some Sandy Bernhard and Lewis Black in your delivery. Do you consider either or both to be influence?

JS: Yes, those two in particular. You’re probably also hearing Justin Vivian Bond. I was out the other night to see Taylor Mac’s show in New York. A friend who was with me leaned over and asked, “What is Taylor’s accent?” I said, “It’s Justin Vivian Bond. We all do it!” It’s true, we all do. Sandy and Lewis are definitely influences. I think, in a very strange way, the first influence I ever noticed on me was Jack Benny. That timing of, “Take the pause. If you’re going to do it, take it fully.” Sandy and Justin Vivian definitely are people who, when I was coming up as a young kid in New York, I would go see (Bond and Kenny Mellman’s) Kiki & Herb (act) at Joe’s Pub and I would go and see Sandy. Especially as a queer person, to see somebody take that kind of space so unapologetically and fully, it changed my life. I’ve said that many times. I was a theater major in college. When they were trying to prepare you for a job, they would say “Don’t be so gay onstage. Don’t be this. Don’t be that.” When you’re getting that messaging all the time and you go and see someone like Sandra Bernhard or Justin Vivian Bond or Lewis Black, who are so completely themselves, you think, “All that messaging is wrong!” When I get asked about it, I say, “Anything you can do to be yourself, do it! Just double down on who you are [laughs].” Because we’re still looking for individuals. We’re not looking for a product. I really think that’s the truth.

GS: In your “opening remarks” on the CD you say that yes, they should bring back The Match Game. Now that they have, do you regret saying that?

JS: [Big laugh] I think it’s really hard to recapture a sense of magic. [Laughs] I don’t know. There are some lovely people that I like on the show, but I think it’s hard to recapture whatever that was in a bottle. Maybe it also had to go with a certain sense of innocence that we don’t have anymore. It was kind of all double entendre and now we just say what we mean. I like a lot of the people involved. I think it’s a fun idea. I don’t know if they’ve gotten it right yet, but I applaud them for trying.

GS: Do you still feel the same way about Miley (Cyrus) and (Lady) Gaga that you did when you performed the segment about them?

JS: I will say that Miley Cyrus has changed in my estimation. In the course of the couple of years since I was talking about that I’ve seen her develop into something else and I really started to get in on the joke. I started to see what she was doing as part of putting herself out there in a different, maybe aggressive way. Being aggressive about her sexuality in a way that was really owning it and not kowtowing to anybody’s perception of what she should be doing. When she turned that I thought, “She’s doing something really cool.” She’s an amazing singer and really talented. I think with Lady Gaga, she can really sing and she’s a talented person. She’s just not for me. I’m not that person. I don’t like a cheering anthem [laughs]. Before I called you (for the interview), I was listening to early Billie Holiday. That’s how I usually wake up every morning [laughs]. Somebody shouting at me – I’m not into it.

GS: Finally, now that marriage equality is the law of the land, have you changed your opinion of gay marriage?

JS: I know! I appreciate it! I’ve always supported gay marriage. I marched for it. I signed every petition I needed to. I called my senator. I did the whole thing because I do believe that on principle, gay and queer people should be allowed every right that straight people are allowed. I think where I stand on gay marriage is that I appreciate it. I want people to find their bliss and do what they want. Their relationships should be protected and counted. But I do think that gay and queer people have been having relationships outside those bounds for a long time. I think that rather than conforming to the monolith, we as queer people bring a lot of information about relationships to the table. I hope that as marriage becomes the trend or continues for people that we queer up marriage. I hope we make it more informed. I hope we bring all the stuff that we learned and all the things we are to the table, rather than trying to fit into a box we didn’t make. I kind of dog on marriage because sometimes it’s an easy joke [laughs]. But I really truly believe that queer people bring a lot of information to the table about love and how we love each other and what that means. If we lose that or abandon that for this parameter of what we’ve been taught marriage is, I think we’re losing something about ourselves and I would hate to see that go away.