Rumer has it: Brit songbird returns with vibrant new album

I’m interested in life and finding out more about the human condition. 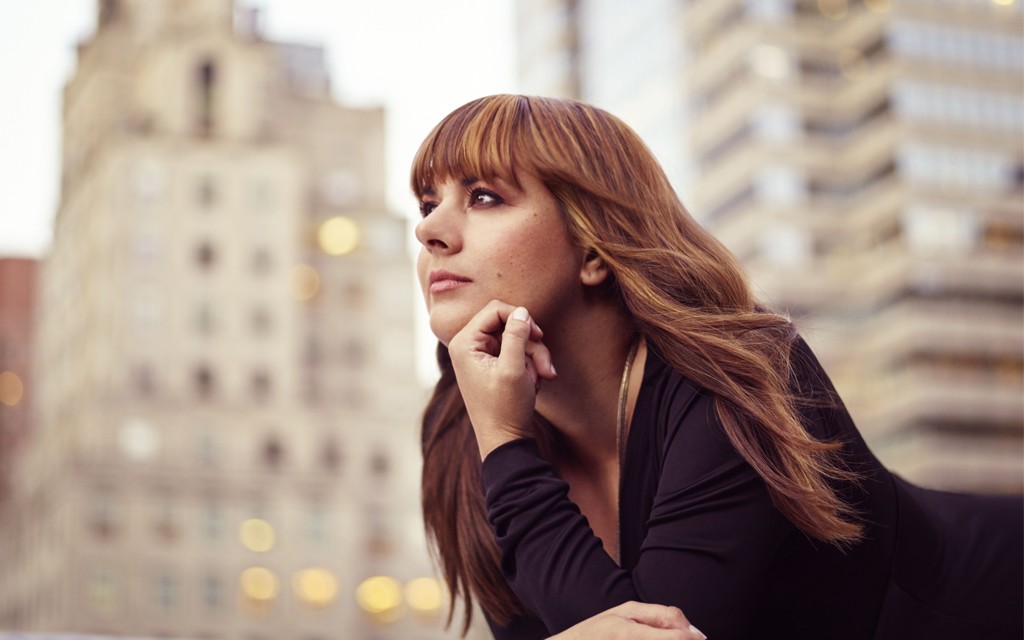 Into Colour (Atlantic) is the exact right name for the vivid new album by singer/songwriter Rumer. After presenting her own version of sixties pop on her incredible 2010 debut album Seasons of My Soul, Rumer turns her attention to the soulful seventies on Into Colour. From the reverent retro disco of “Dangerous” to the beautiful balladry of “Better Place” and “Reach Out” to the seductive “Baby Come Back To Bed” and the light funk of “Play Your Guitar,” Into Colour is a  vibrant achievement. When Rumer takes us to the Church of the Open Mind on album closer “Frederick Douglass,” you will be ready to testify to her talents. [Rumer performs on Apr. 13 in Chicago at S.P.A.C.E. and on Apr. 23 in Los Angeles at Masonic Hollywood Forever.]

Gregg Shapiro: Rumer, I spoke to you a few years ago, at the time of the release of your 2010 debut album Seasons of My Soul. In what ways would you say you have changed as a songwriter and performer since then?

RumeR: When I first started performing, I was so focused on getting the album made, I didn’t think about success or anything like that. Success, to me, was finishing it. I hadn’t thought about beyond. So when the sort of demand for shows and going out to play came upon me quite suddenly, I wasn’t prepared. I was painfully shy and I got terrible stage anxiety. I was really green, basically, when I started. I didn’t know what the hell I was doing.  I was like, “Oh, my God, there’s like 2,000 people in this room,” and I’d only played to one man and his dog before. And not one paying customer in my life. I had always played to somebody else’s crowd or the people behind the bar or whatever. I’d never had 2,000 paying customers waiting to have their concert with Rumer [laughs].  I managed to get through that in one piece. I’ve changed a lot. I’ve done a lot more gigs. I’ve learned a lot. I’ve gotten better at performing; more confident. I’ve got more studio experience. I’ve met loads of new people. I’ve had access to some of the greatest songwriters who’ve ever lived to be inspired by and to get advice from, including Jimmy Webb and Paul Williams and P.F. Sloan and Stephen Bishop, all the people who were on my Boys Don’t Cry record. I’ve been on this rich journey and it helped me evolve in so many ways.

GS: I’m so glad you mentioned your 2012 covers album Boys Don’t Cry. You closed Seasons of My Soul with a reading of the David Gates song “Goodbye Girl,” which in a way could be considered a hint as to what was to come with Boys Don’t Cry.

R: “Goodbye Girl” was supposed to be for Boys… I recorded it for Boys…I had already started recording music for Boys…The label said they wanted that track on Seasons… I was like, “Nooooooo.” I wanted it for Boys… We had a little argument about it and they just took it. I like the way you were thinking about it. Like it was heralding (what was to come).

GS: Why did you decide to do a disc of covers for your second album?

R: I don’t think of it as a covers record. Covers is sort of an idea and term in the context of the music business. There seems to be a sort of negative connotation to it, but actually I think that it’s about storytelling and curation, both things in which I’m really interested. Both things I want to be better at and to share with people. It was a concept album and I had selected the material completely and specifically to paint a portrait or landscape of emotion and feeling. Also because I feel like as a singer, a storyteller, a narrator, it’s an important role. For example, if you’re an actor, you’re not going to insist on writing your own plays or movies or TV shows, are you? Because you’re never going to get to play or experience the world as all these different characters and points of view. In fact, it would be incredibly limiting and egotistical to insist on only performing your own work. Yet, it music, it’s frowned upon to do covers. I don’t see it like that. I see it as storytelling. I want to sing a song from the point of view of an 85 year old man. It’s music as storytelling as in the folk tradition. I’m interested in life and finding out more about the human condition. I don’t want to restrict myself with just me [laughs].

GS: One of the benefits that came from Boys Don’t Cry can be heard on your new album Into Colour: your songwriting collaborations with Stephen Bishop, whom you mentioned, on “Dangerous,” “Baby, Come Back To Bed” and “Sam.” What was the experience of writing with Stephen like for you?

R: Really fun. He’s a fun guy; very, very funny. He’s old school, like an old school Hollywood star. He’s got that charisma that doesn’t exist anymore; old school Hollywood charm. He’s humorous and cool and says so many funny and cool things. He’s got a great way of looking at the world. He’s also very down to earth, as well. It was a joy and he’s a joy. He’s a great human being and I love him.

GS: You are a songwriter who appears to be comfortable with the collaboration process. What makes you so good at playing well with others?

R: I never used to be, actually. I had to learn that. I was very defensive when I started. As a woman you are defensive because there’s this constant assumption that you don’t write your own songs, you can’t do anything by yourself, there’s loads of men in the background doing everything for you. You couldn’t possibly do everything yourself. You can’t be a songwriter. You can’t be a producer. Who the hell do you think you are? So, there’s that energy that women come into in the music business; that you’re faced with. It can make you very defensive. At the beginning I didn’t want to collaborate. I wanted to prove that I could do it by myself. For the most part, I did. I wrote 99% of the music and songs myself. I collaborated on a few things musically, but really everything was me. This time I was way more collaborative. I just relaxed. I proved that I could do it myself, so I don’t have to prove anything anymore. Let’s try this, let’s try collaboration, see who’s got the best ideas.

GS: If Seasons of My Soul was a `60s pop homage, then Into Colour is pure `70s soul tribute, beginning with the vintage disco sound of “Dangerous.” Would you have liked to be a disco diva from the disco era and what would it mean to you to be a modern day disco diva?

R: I’m definitely not a disco diva. I wouldn’t look good in one of those outfits [laughs]. I’m maybe a little bit too old. I’m just not that kind of performer. But I do like disco music. On Into Colour we were trying very hard to keep true to being authentic to whatever song form we were going for, whether it was the power ballad “Better Place” or disco in “Dangerous.” We wanted to pay respect to the song form. We wanted to do disco and do it right with everything real and give it that sophistication.

GS: The previously mentioned “Baby, Come Back To Bed” has a Dusty In Memphis quality to it.

GS: Would you consider Dusty Springfield to be an influence?

R: Oh, my God, are you kidding? Dusty is it! It doesn’t getter better than Dusty. She is divine [laughs].

GS: “Pizza and Pinball” is a perfect summer song, something that people here in States can be grateful for during this brutal winter.

R: That’s nice. The song came about because me and Rob (Shirakbari, the album’s producer/arranger) have a friend called Vince (Bernardy). He’s a singer/songwriter and he’s a really big, beefy guy. He’s from Minnesota and he’s got a family of big, beefy Minnesota construction workers. He’s one of these guys who’s really emotionally sensitive. He can play guitar and he can sing songs. He’s really manly but he’s also very sensitive. He can upholster, he can skipper a boat, he’s just amazing and creative. He’s one of our friends. He loves pinball. He used to take us to this pizza joint and he’d go there because it had this pinball machine. He’d say, “Come on guys, let’s go play pinball.” I’d sit there with my Coca-Cola and Rob would get thrashed by Vince on the pinball machine. It was at a time when we really needed cheering up and they were just good times. When me and Vince and Rob sat down to write a song together, I wanted to write a song that encapsulates Vince and his heart and that wonderful, boyish exuberance that Vince has; a big, manly guy with a little boy heart. I was asking him about his childhood and Rob was talking about his childhood. They were talking about stuff and I didn’t understand any of it. I just started writing everything down. Then we started to piece it all together about Rob’s childhood in Arkansas and Vince’s childhood in Minnesota. It became an homage to a seventies childhood in America. Of course, I had a shitty childhood, so I was in tears of joy enjoying this kind of lovely, sunshine, all-American childhood. It’s one of the songs that I find to be the most emotional on the album. It really makes me cry because it hits a nerve. I didn’t have any of that.

GS: As we speak, you are currently in the midst of a concert tour.

R: I’m in Edinburgh right now and then I’m going to Europe in a few days. It’s going very well, thanks for asking.

GS: What can people expect when your tour hits the States?

R: I’ll play a lot of music from Seasons…, a couple of songs from Live At Daryl’s House, some songs from Into Colour. We’ll hopefully have a nice exchange of energy in the evening. Sharing music and making a connection.