We’re just comparing it to who’s hungriest, who wants it most, who’s got the balls to get out there and deliver the mail. 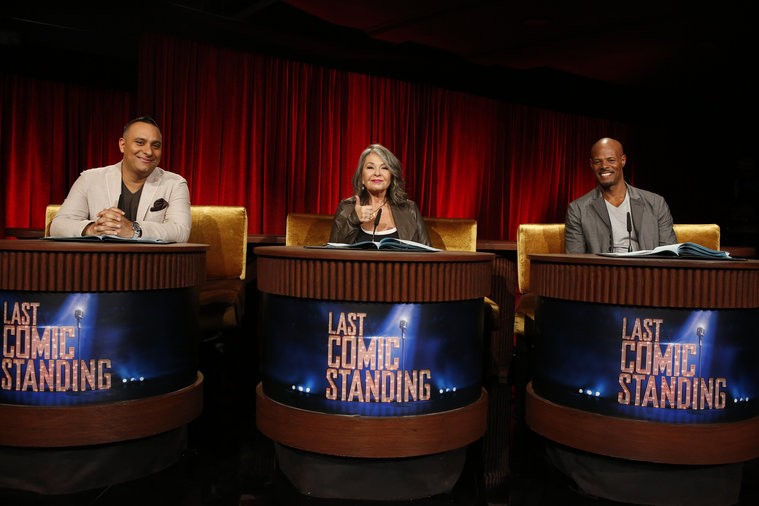 Last Comic Standing is a reality based television program that began back in 2003 on NBC. New unsigned comics compete from around the globe to see who can tickle a funny bone and land on top. Now beginning an eighth season with JB Smooth as a host and a judging panel consisting of established comedians Roseanne Barr, Keenen Ivory Wayans, and Russell Peters. In this reboot openly lesbian funny woman Wanda Sykes is executive producing and also a mentor.

Many television watchers will remember Barr from her hit show Roseanne. She took home an Emmy and a Golden Globe while breaking down barriers on many topics such as race, abortion, and gay rights.

JN: [Jerry Nunn] Hi, Roseanne. What made you decide to do the show this season?

RB: [Roseanne Barr] I just thought it would be really fun. I heard that Keenen Ivory Wayans was one of the judges and I really love him. I like Wanda a lot too. I thought it would be fun to work with some really great comics and get right in the middle of stuff that has to do with stand-up comedy.

RB: Intelligent. I'm just me. I didn't try to copy somebody else. I'm a big fan of comics and comedy, as you may know and writing.

I just give my honest opinion, as I have done for all these many years when it comes to writing and comedy.

JN: How would you have done in this competition?

RB: I would have won. In fact I did win the Denver Laugh Off, which propelled my career. I did a number of other un-televised comedy contests. I think I would've really worked really hard. That's what I like about these comics because they're prepared. I wouldn't become part of any contest unless I was really prepared and thought I could win. That's what I think we have here. We're seeing who's prepared and who isn't prepared.

That's the most exciting part to me. But, of course I have to say I would've won. You have to have that kind of self-confidence being a stand-up comic. You have to really believe in what you do and that you're the best at doing what you do. We've seen a lot of people on this show, you know, come in like that and falter.

JN: How do you feel stand-up has changed over the years?

RB: Well, there's so many different kinds of stand-up and so many different kinds of clubs and people like that.I was thinking that it was pretty static and kind of boring, actually, over these last few years. Becoming a judge on this show and seeing people who are saying and writing jokes that I've never heard before. It's kind of exciting. I've never heard these premises in so many of my favorite comics who are competing. I've never heard this particular kind of writing. It's very brave and it's cool. So that brought me back into comedy. I went to the Comedy Store and saw these incredible comedians. I have never seen anything like it. I feel really old. It's a whole different world.

It's like that when I need my computer fixed; I call my 13 year-old grandson. It's a whole other world. It's exciting just to watch it. Keenen and I were talking about it. This is like comedy coming back. It's like a re-birth of comedy. Not just on this show but all over the place. Yes, there's a whole different everything. It's exciting. It's kind of like punk-rock.

JN: About six months ago you said you were done with television.

JN: So what appealed to you about judging?

RB: I like watching some really incredibly talented people. So that's easy. I'm not having my brains racked over the coals. I'm laughing and I'm getting awesome craft service and nice outfits. The company's fantastic.

JN: What's one thing that people will learn about you in this role as judge?

RB: That I'm a mouthy bitch. People may not have known that. [laughs]

JN: How are the other judges?

RB: I have to say I'm blown away every week. I'm sitting next to a bodhisattva. I'm sitting next to Keenen Ivory Wayans. His commentary and the way he sees things is hilarious. He discovered a lot of great performers and comics on his shows and movies. Russell Peters, we need to mention him too because I never even heard of the guy, to be honest. This guy is like the Beatles. I went on YouTube and he's playing on like 70,000 seat arenas. He has kind of a Russell Brand thing. He's real new to the United States. That guy is so funny. It's like non-stop. He gives feedback like a standup comic, joke, joke, joke. There's nothing on earth that he doesn't have a joke for. It's amazing.

JN: It is nice to see the diversity on the panel as well as Wanda as a producer.

RB: I do think that because Wanda is an African American woman, she has a different definition of things than just the average television producer. I think it's very needed and very exciting.

JN: How did the judges separate the veterans from the newbie comedians?

RB: We're just comparing it to who's hungriest, who wants it most, who's got the balls to get out there and deliver the mail. There's a lot of different things go into it. Some of the professionals, a few of them, haven't made it because they're kind of arrogant. They're not really wanting it. So we'll take somebody who infects the audience with enthusiasm over somebody who's kind of bored.

JN: I look forward to seeing the show.

Season premiere of Last Comic Standing begins on May 22 on NBC.