What's not to Love?: an interview with Darlene Love

I’m like every other female artist – Tina Turner, Gladys Knight, Patti Labelle – we have such a large gay fan-base. 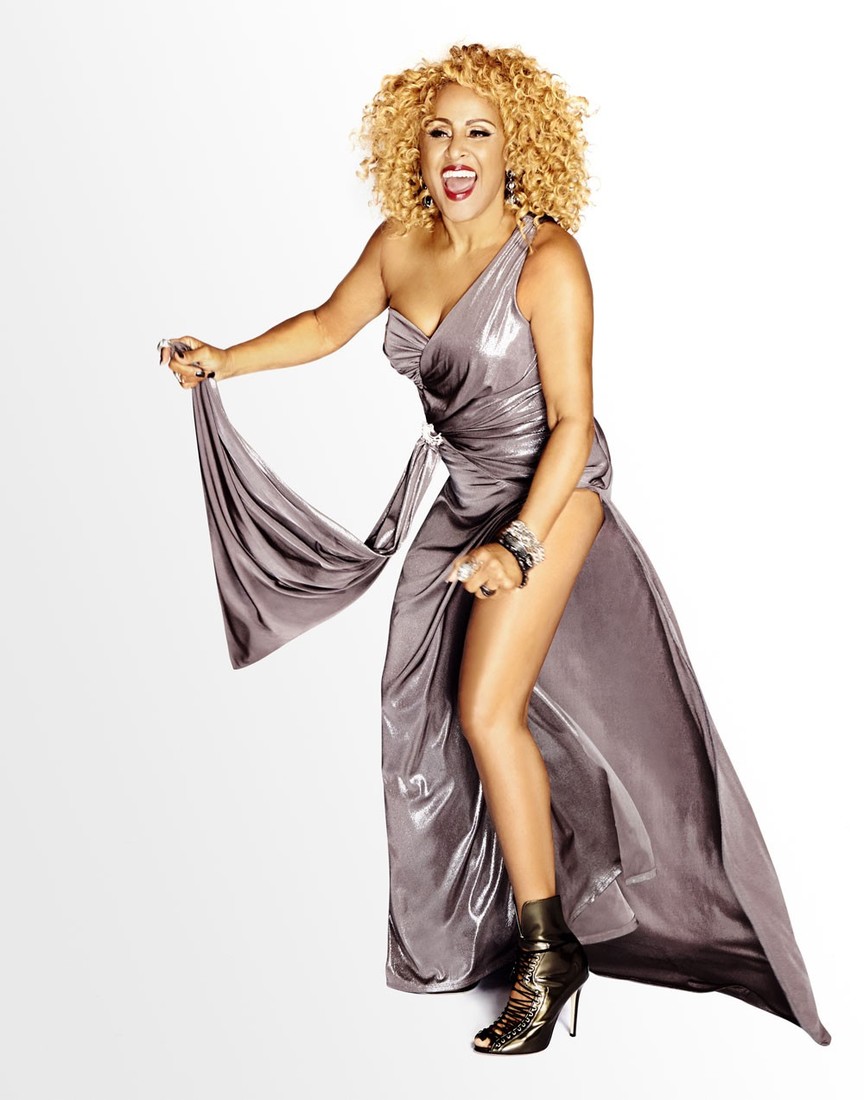 The title of Darlene Love’s new album, Introducing Darlene Love (Columbia), is somewhat ironic. It’s more of a reintroduction, because not only is the iconic Love a familiar voice and face to music-lovers of all ages, she actually released her first solo album, the underrated Paint Another Picture in 1990. That said, what listeners get on the new disc is a reinvigorated Love, fresh from her appearance in the Oscar winning doc 20 Feet From Stardom. Under the guidance of Steven Van Zandt, Love sounds better than ever on Introducing Darlene Love, giving her all on songs by Van Zandt, Bruce Springsteen, Linda Perry, Joan Jett, Desmond Child, Jimmy Webb and others. I had the honor of speaking with Love about her career and her new disc. [Darlene Love performs on Dec. 16 in Waukegan at The Genesee Theater.]

Gregg Shapiro: I want to begin by congratulating you on making “The Must List” in the September 18 issue of Entertainment Weekly. What does that mean to you?

Darlene Love: Thank you, it’s wonderful. Me and Stevie (Van Zandt) wanted to do the best album we could do and we hoped everybody would like it. Everybody really loves it! Just to (be able to) make it is amazing. You hope to do this. And then you say, “Okay, suppose it doesn’t happen.” And then you go on to the next thing. It meant a whole lot to me to be able to make it.

GS: Speaking of honors, you were inducted into the Rock and Roll Hall of Fame in 2011, as well as being featured in the Oscar-winning 2013 documentary 20 Feet From Stardom. Can you please say something about maintaining your career longevity?

DL: I think if you have a dream in your heart, nobody can make it work but you. Being inducted into the Rock and Roll Hall of Fame was something that I never thought would happen. But everything that has happened to me in the last four or five years I never thought would happen. It was a lucky break for me to do the movie 20 Feet From Stardom because a lot of others turned it down. They said, “I don’t want to do a documentary.” I had two friends who convinced me to do it. One was (record producer) Lou Adler, who is a very old friend of mine, and also Richard Donner, who was the director of the Lethal Weapon movies. I said, “If you say I should do it, I’ll do it!” I talked to the director (Morgan Neville) for about two hours before I even agreed to do it. I said, “Oh, yes, this is going to be exciting,” because the group The Blossoms (of which Love was a member) was the first black background singers on record in Hollywood. We were the first. We didn’t think about being the first, we were just doing our job. It was a great way to make money. We had no idea [laughs] that you could make money doing background (vocals). All these wonderful things that are starting to happen because of my career as a background singer beginning in 1958 came to a conclusion when we won the Academy Award. It doesn’t get any better than that.

GS: The Elvis Costello tune “Forbidden Nights” is a perfect example of modern retro pop, complete with girl-group style “sha-la-las.” What did you think about the song when you first heard it?

DL: Steven Van Zandt has a children’s charity and I first did that song with Elvis Costello. I told Steven that it would be a great song to sing, for him to produce, and he said, “Yes, let’s do that.” But, at the time, we had no idea who was going to do it with me. He suggested Bill Medley. (He said), “You know him. You guys have worked together. Let’s see if he’ll do it.” We called him and he recorded it. It’s such a great song. The songs on this album are probably the first time I ever did an album where I love every song.

GS: One of my favorites on the record is the Bruce Springsteen tune “Just Another Lonely Mile.” What can you tell me about that song?

DL: Steven called everybody he knew that he thought were great writers for my voice. Of course he would get in touch with Bruce. Bruce grew up with the Phil Spector music and he loved it. Many years ago, when I first met Steven and Bruce at the Roxy in the early `80s, he heard me sing (Springsteen’s) “Hungry Heart” in my show. I think they never forgot about that. He knew that Bruce would come forth and write a song for the album. That’s one of my favorites, too! It’s got a great melody and great lyrics. You just sing it and make it yours [laughs].

GS: Speaking of making it yours, in addition to all of the new songs on the album, you also sing “River Deep, Mountain High.” Why was that song selected?

DL: That was a song that I thought was going to be mine from the beginning. When we were working with Phil Spector, he told me to learn the song. He gave the song to the girls (in the group). He didn’t say anything. This was how he did things. I thought, “Wow, this is such a great song!” We got to the studio the day of the (recording) session and Tina (Turner) comes in. I went, “I guess I’m not singing the song.” He had me learn it and teach it to the girls, and that’s it. That was sort of coming toward the end of my life with Phil Spector. At that point there wasn’t anything that I would be surprised about. Stevie wanted to redo the record because it’s such a great song. I think it’s one of the greatest up-tempo songs ever written, with the excitement and everything. Stevie wanted to be able to hear everything – the horns and the string and what the background singers were singing and hear the lead clearer. It was a song that I should have recorded and didn’t get a chance to (until now). That’s why that song is on there.

GS: You mentioned the Bill Medley duet - you also performed a duet of “He’s Sure The Boy I Love” with Bette Midler on her It’s The Girls album. What was that experience like for you?

DL: It was so much fun! Just being around Bette, being in her presence; you never know what she’s going to do or say. Then she chose of my songs, which was really weird, because even though I recorded that song, Phil put The Crystals’ name on it. But they all knew it was me. That was one of the girl group songs that she (Bette) chose (for her album). It was very easy to do it. (It was just a question of) how are we going to do it? What part are you going to sing? I would think of something and she’d say, “Yeah, yeah, that’s good. Do that!” I would say, “What are you going to do?” She’d say, “I’m going to do this. Go ahead, sing it, sing it!” It was fun to sing with her because we both knew and loved the song. The way it came out was perfect because it was a shared thing.

GS: On the new album, you perform songs by queer songwriters including Desmond Child, Joan Jett and Linda Perry. Are you aware of your LGBT fans and, if so, what do they mean to you?

DL: I’m like every other female artist – Tina Turner, Gladys Knight, Patti Labelle – we have such a large gay fan-base. It’s thrilling. They get what we do, almost more than anybody. You can’t leave them out. They come to our shows and have almost as much fun as we’re having onstage. They become a part of who we are. They haven’t gotten to the part with me where they dress like me because I don’t have a certain look. But I go to some of Tina or Patti’s shows and they look just like them [laughs]! They make our shows so much fun.

GS: You have a number of upcoming tour dates that extend into early 2016. What do you like best about performing live?

DL: There’s nothing like it. You get everything at the same time. Your audience lets you know whether or not they like the song. They’re very polite if they don’t like it – they give you a nice little hand. But when they like a song – they go with it. There’s nothing like live performance. You do movies, but you don’t get anything from it until the movie comes out and it’s a hit. But when you go onstage and perform for your fans, they’re there for you. So you want to be there for them, to make the show as great a feeling for them as what you’re feeling. That’s why I think a lot of entertainers go back to Broadway.

GS: Will the show include a mix of both classic and new songs?

DL: Yes! We don’t change them. People like Stevie Van Zandt and Bruce and I’ll even say Paul Shaffer, they’re very careful about changing the Phil Spector songs because they love them so much. What Stevie did was put a little twist on them, added a new beginning and a new ending. But the body of the song is the same. We do four great Darlene Love songs right smack dab in the middle of the show. We tell them in the beginning, “We’re going to do some old ones for you. We don’t call them oldies any more, we call them classics. Don’t worry, we’ll get to your favorites later on in the show.”