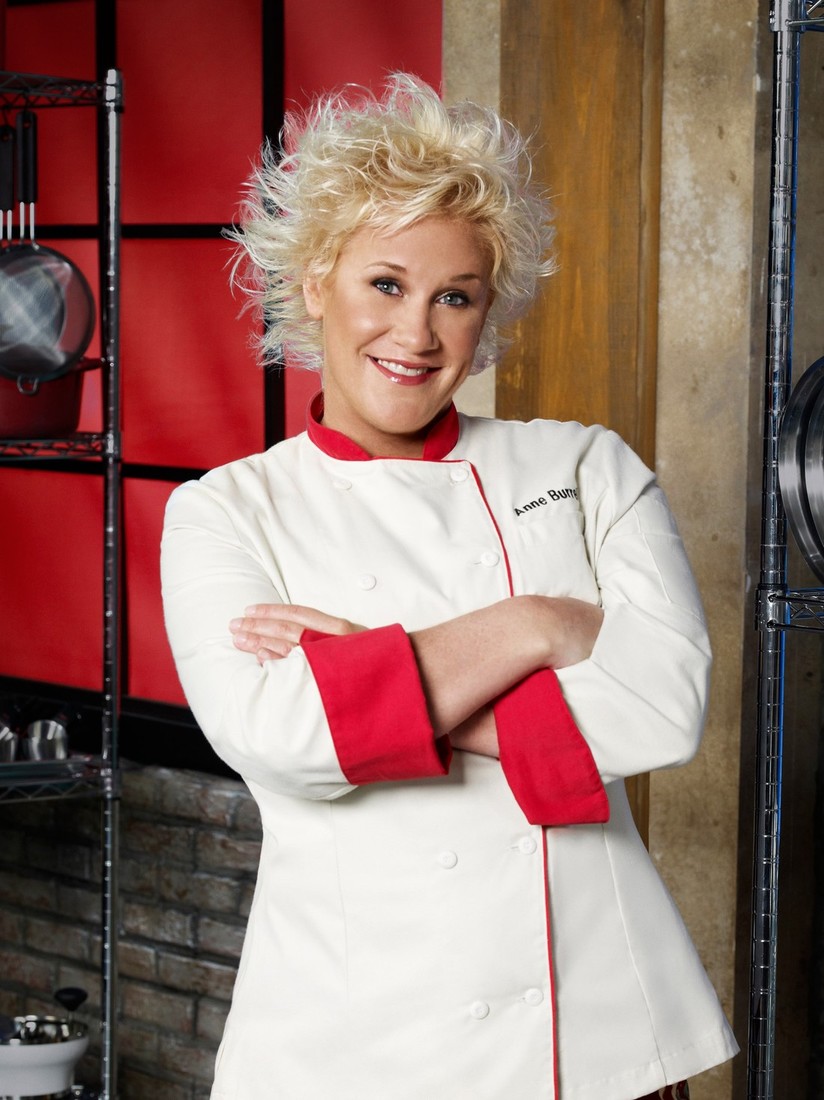 Chef Anne Burrell has made a big splash as a television personality. From Iron Chef America to co-hosting the Worst Chefs in America, her blonde hair and fun jokes have made her a loyal fan base. This year she won the fourth installment of the Chopped All-Stars tournament winning $75,000 for the Juvenile Diabetes Foundation.

Burrell came out as a lesbian in 2012 and hosted the series Chef Wanted with Anne Burrell the same year.

Nunn talked to the blonde bomshell at a recent Chicago cooking demonstration at the National Restaurant Association Restaurant, Hotel-Motel Show.

JN: (Jerry Nunn) Did you always want to be a chef?

AB: (Anne Burrell) My mom was a great cook so I always wanted to eat and make stuff. I did cooking in 4-H but it wasn’t until I was out of college that I decided I wanted to make this my career.

JN: Where did you grow up?

AB: Upstate New York, outside of Syracuse in a little tiny town.

JN: What led to all of the celebrity chef work?

AB: I worked for Mario Batali when Iron Chef America was starting he asked me to be on his team. I was on the pilot. We were the only team that was the exact team members from our first battle to our last. We did more than 30. Our team always had the same role. Mario was clearly the team leader and decided all the soups and decided what the dishes were. I always decided the pasta and desserts.

AB: I am used to it now. It takes a while to get used to it. It never gets any easier watching yourself but you have to do it in order to get better. There are so many things that you think will look cool but then you look like an idiot!

AB: I adore Bobby Flay. He is to me someone that I would call a true gentleman. He is wildly passionate about what he does. He’s fun and super smart. He can goofy but is super serious sometimes. I find him inspirational.

AB: That is my sparkle.

JN: Your hair gets a lot of attention and was a big topic while you were cooking at this demonstration.

AB: My hair is always a big topic. It is just hair. People tweet me and tell me my hair is dumb or it pisses them off. I think people need more to do in their life if my hair pisses them off.

JN: Aren’t there a lot of fans also?

AB: There are a lot of fans but it is always a topic of discussion.

JN: Would you grow it out?

AB: No, well it kind of morphed into this woosh. I was near a Big Boy restaurant so I took a picture of me next to the statue in front. I instagramed it describing it as my hair spirit animal.

JN: I like your show Worst Cooks in America because I can’t cook. So it is fun to watch.

AB: I love that show so much too because we start off with what I like to call the “lovable losers.” They know they are bad so when we laugh at them it is not like a mean thing. They really do dig deep and get better. Instead of laughing at them you start to cheer them on. That is why I love it. It is really very sweet.

JN: What happened with Secrets of a Restaurant Chef?

AB: That has been out of production for a long time. It was my first and favorite show. I felt like I taught people on a mass scale with that show. I teach people with Worst Cooks but Secrets of a Restaurant Chef was a standard cooking show. It was hard to learn how to do that show. I did nine seasons of it and a 119 episodes. One episode was an hour so I was always pissed that we didn’t call it 120 to make it even.

When I was reading Julia Child’s book, who is my absolute inspiration, she made 119 episodes of her show The French Chef so then I was so happy it made me cry!

JN: What are your upcoming projects?

AB: I have season seven of Worst Cooks coming up. We are also doing Worst Cooks Celebrity. I am doing that one with Rachel Ray. They are putting me up in the big girl leagues.

JN: I wonder who is going to be on it.

AB: Me too. I don’t know anything yet. I am so excited!