I get very emotionally involved with the tracks I’m playing. It’s like having a megaphone on what you’re feeling yourself. 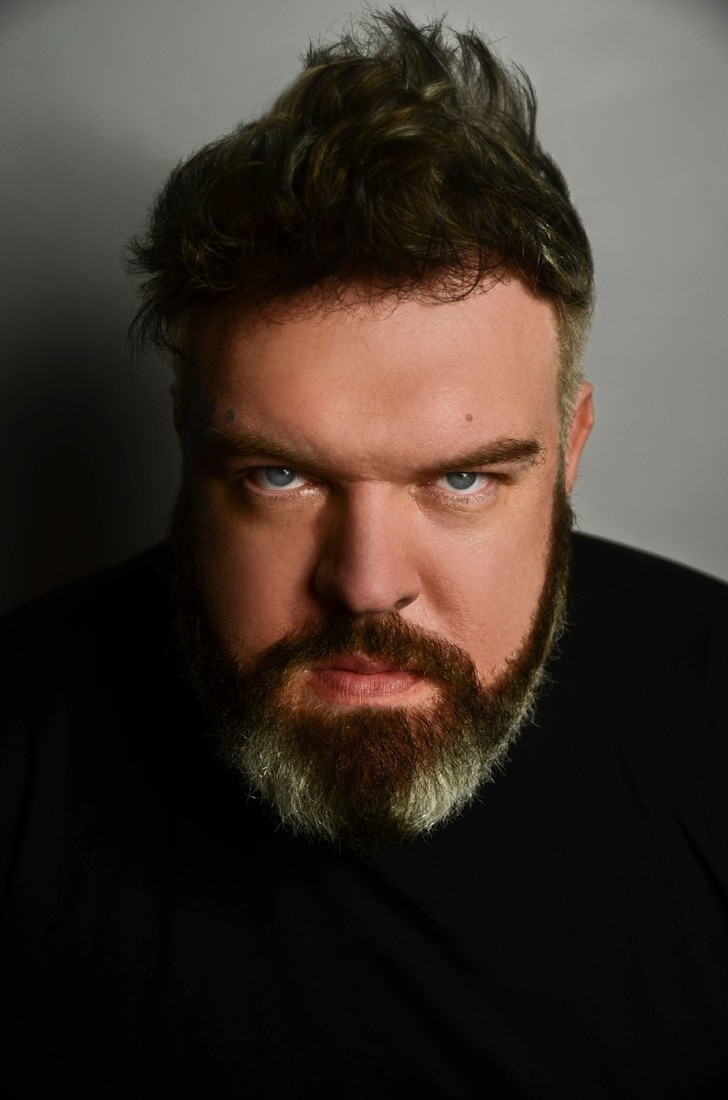 Since its debut on HBO more than four years ago, Game of Thrones, based on the book series by George R. R. Martin, has been one of the most consistently popular shows on TV. Set in the mythical territory of Westeros, the fantasy show’s popularity is probably based on the fact that the characters – good and evil – could just as well be walking among us in this century. Their behaviors aren’t that dissimilar from our own. It’s just that they have dragons and medieval weaponry at their disposal.

One of Game of Thrones’ most beloved characters is the “sweet giant” known as Hodor. As portrayed by gay actor Kristian Nairn, who is in fact almost seven feet tall, Hodor, whose speaking ability is limited to his name and nothing more, has become a certified fan favorite. Nairn, whose first love is music, has also made a name for himself in the club DJ scene. He recently released his debut single “Up,” with the b-side “Beacon,” on Radikal Records. I spoke with Nairn about his career and more in August 2015.

Gregg Shapiro: Kristian, most people first became aware of you via your portrayal of Hodor in HBO’s Game of Thrones. What does it mean to you as an actor to have been cast in a show as big and popular as Game of Thrones so early in your acting career?

Kristian Nairn: Really, it’s my entirely first onscreen role. I didn’t have the desire to pursue the acting side of my life. I studied acting and music in drama school, but music was always more important to me. I didn’t have any idea how big Game of Thrones was. I don’t think any of us did. I remember saying to my mother, “I’ve just done this read for a show called Game of Thrones.” My mother was aware of the show through the books and she completely flipped out. She said, “If you get offered the role, take it. It’s going to be big.” I said, “Oh really?” I had just done this audition for this one-word character. I wasn’t really that keen on it. But it’s been totally and completely life-changing. There’s nothing about my life that is the same as it was before Game of Thrones started. Everything is different in 99.9% positive ways. I’m very grateful.

GS: You described Hodor as a “one-word character.” He’s famous for only saying his name when he speaks, and nothing more. What are the challenges of playing a character with such dialogue limitations?

KN: It really depends on the scene. Sometimes HBO will give you scene that’s colored by body language and emotions. That can be challenging. However, I’m not afraid to admit that some of the scenes where you’re just a piece of background furniture or you’re stoking a fire and you have to shout the word “Hodor” – that’s not very challenging [laughs]. A lot of the time (the people at) HBO are very specific about what they want from you as an actor. Only having the one word to show that can be challenging, but I enjoy it. It’s something different. As someone who talks a lot in real life, it’s a nice change [laughs].

GS: You mentioned that your mother had been a fan of the books. Had you read any or all of George R. R. Martin’s books before you became a GoT cast member?

GS: Were you a fan of this kind of material prior to becoming Hodor?

KN: I’m a huge fan of fantasy. But I don’t classify Game of Thrones as fantasy. It’s more like mafia. Like family drama. I prefer my fantasy a bit more unicorny. I like rainbows and unicorns and magic spells. That’s my favorite fantasy. I love Lord of the Rings. I think the show does a good job of sticking to the books (by Martin) and making the necessary changes.

GS: What’s the best way to persuade someone who might not ordinarily watch a show such as GoT to tune in to it?

KN: I’ve stopped even trying now. Everyone I know in my life watches it. It’s just ridiculous. Everyone’s obsessed with it. Every year it grows. There are even friends of mine who didn’t necessarily watch it because I’m in it. But they’ve all fallen like dominoes. I’ve never seen anything quite so universal.

GS: It is its own phenomenon. Before you were an actor, you had established yourself as a club DJ. What do you enjoy most about spinning?

KN: If I’m on set, I generally DJ the night before. I always do both. I get very emotionally involved with the tracks I’m playing. Whether it’s a powerful bass line or an emotional synthesizer or a really good vocal line. It’s like having a megaphone on what you’re feeling yourself. It’s a way to shout out how you feel to the crowd. For me, it’s like an emotional conversation with the crowd. If you get that back from the crowd it’s really rewarding. I love the live aspect of it and the interaction.

GS: Have you had the opportunity to DJ at any bear events in the U.S., such as Bear Pride during IML in Chicago, Bear Week in Provincetown or BeachBear Weekend in Fort Lauderdale?

KN: I’ve been asked to do a number of Bear festivals, but unfortunately I haven’t been able to do them yet.

GS: I’m guess that being a DJ means you are a night person.

GS: Do you have to find a way to be both while working on GoT?

KN: People often worry about my health because I drink a scary amount of Red Bulls. People are shocked when they see the back of my car is full of Red Bull cans. I find that it doesn’t have any effect on me anymore. I don’t know why I bother [laughs].

GS: So how do you balance those schedules?

KN: I don’t. I sleep probably an average of two to three hours a night. But I’m getting on top of that at the moment. That’s probably more out of necessity than choice. I can’t turn my brain off when there’s something that’s still to be done. I can’t rest.

GS: You are also a musician and have recently released your first single called “Up.” What can you tell me about it?

KN: It’s actually a sample of an old Pamela Fernandez track, a very small snippet. I had it re-sung by a talented girl called Leanne Robinson. I love males who sing high and females who sing low. I love an asexual vocal. I like that aspect of Leanne’s voice. She was able to sing it really well. It’s what I love about house music.

GS: Did you ever get to meet Frankie Knuckles?

KN: No I never did, unfortunately. He was a genius. He would have done what I do, which is to fuse genres of house music together. He was never really stuck in one genre. His stuff would have been almost techno at one stage. I love that. I don’t see any reason to limit yourself.

GS: You mentioned males who sing high. Could you ever see yourself collaborating with Jimmy Somerville?

KN: Jimmy Somerville is one of my favorite vocalists. Him and k.d. lang. I would love to work with her. She’s one of my all-time favorites. Maybe someday.

GS: Are you working on a full-length album?

KN: I never really envisioned it that way. Being a DJ I only see things as singles. But it is in the cards for after Christmas. We’ll have enough tracks to put together as an album. I have five to seven tracks ready to go. I’m pleased to say each is better than the next one. We didn’t shoot our mother lode with the first single. I didn’t show all my cards at once.

GS: Almost a year and a half ago, you came out as gay during an interview. Do you recall if there was any reaction from your GoT fans, or do you think that type of fan-base might be unfazed by such a revelation?

KN: The thing was I assumed that everyone knew [laughs]. It was really my second coming out. I’d done it when I was 14 and didn’t think I’d have to do it again. Especially since every single person in my life knew. I don’t know how people didn’t catch on to it. The Games of Thrones fans have been wonderful. There’s only been one negative comment. Honestly, I don’t go digging for negative comments on the internet because obviously there are some [laughs]. I don’t think that’s good for anybody’s mental health. Aside from that, it’s been a real pleasure. I didn’t gather that it was of any importance to anybody. I thought, “It’s just me. It’s always been the way I am.” I’ve gotten some nice messages. The way things are going, we’re making real progress in the world. It’s not the time to be quiet about this stuff. It’s the time to be recognized and visible.

GS: It’s interesting, too, that it was just a few months ago, Ireland led the way on gay marriage and then the U.S. followed suit. Do you have any thoughts on that?

KN: I live in the one part of the U.K. and Ireland that has yet to follow suit. I live in Belfast. We have our own little parochial government here. They will not let it happen yet. That’s something we’re working on. I will definitely do my part when it comes time. It has to change. We have the whole Protestant/Catholic thing here. A lot of the people want to become part of Ireland and a lot of them want to stay part of the U.K. It’s like, “Hello, guys! In Ireland there is gay marriage and in the U.K. there is gay marriage. Just fuckin’ pick one.” You can’t have all of the trappings of being part of a bigger country and not have all of the laws.