Midway Takes Off in Theaters

It’s one of my favorite things is to go on this journey and when they say cut that I don’t even know where I am. 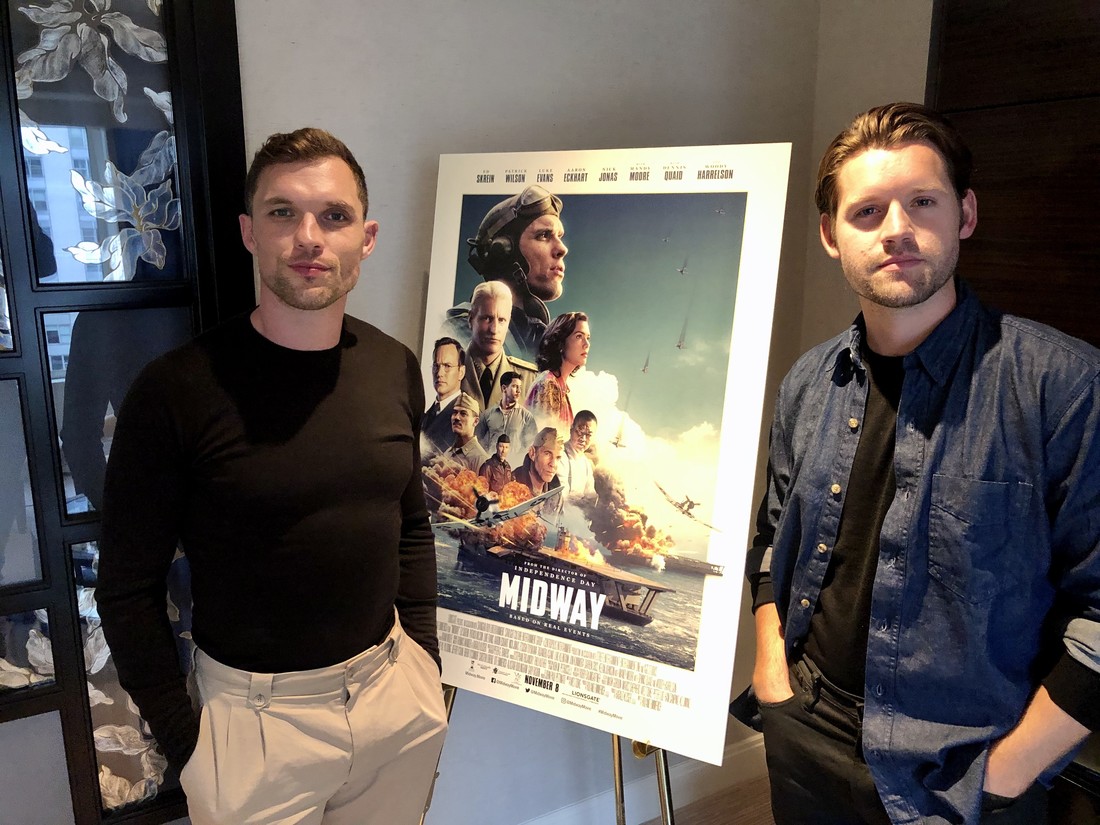 Midway is the thrilling new movie depicting United States soldiers during World War II on June 1942. The Battle of Midway was a turning point in the war thanks to the many heroes that were involved and now new audiences can see it shown on the big screen.

Ed Skrein stars as Lieutenant Richard Best. Many will know him from the movie Deadpool, Game of Thrones and The Transporter Refueled. Luke Kleintank plays Lieutenant Clarence Earle Dickinson. Past roles included Finn Abernathy in the TV show Bones and Joe Blake in The Man in the High Castle on Amazon.

The two sat down to discuss Midway before it opens in theaters on Nov. 8.

JN: (Jerry Nunn) How were cast in the film in the first place?

LK: (Luke Kleintank) It was an audition on tape and then a Skype call. We hit it off and he said, “See you in Hawaii!”

EK: (Ed Skrein) Mine was the opposite. I got a call from Roland Emmerich, the director. I was working on Maleficent so reading my sides for Dick Best and wearing all my prosthetics. I recorded my audition in West London.

It felt right from the beginning. Dick Best felt like a great fit. I got into him more as a character as the process went on.

JN: He looked like a fun character to play. What a cowboy!

EK: He’s a dream role. There’s about five characters inside his narrative and arc. I felt I got to play five different versions of Dick Best.

LK: He’s the cowboy and I was the guy stealing the horse!

JN: How was learning those accents?

LK: It was fun. I’ve done a southern accent a lot. I went to a dialect coach just to get some specifics down about Dickinson.

EK: My character had quite a different accent from mine. Some of the technical New York accent was not so far away from a proper London accent. It was like learning a new skill or learning to write with your left hand. You practice until you can relax and switch off. On the set I could relax as much as I could with industrial wind machines firing in my face and rain inside the biggest studio hanger in North America!

JN: How was it working with the green screens?

EK: It was a blue screen to be technical.

LK: I think they had to do blue screen because of the ocean.

EK: We used blue screen on Maleficent, but that might be something the DP chooses. We didn’t use our imagination as much as you would think. When we flew the planes, we had to use our imagination a lot. The sets were massive. Yes, there were blue screens, but it helps when you are looking into the eyes of committed actors such as Luke Kleintank and Mandy Moore.

EK: You get lost in the actor’s eyes and slip into a flow state, leaving behind the Ed and Luke realm and live in an ethereal creative space. It’s one of my favorite things is to go on this journey and when they say cut that I don’t even know where I am.

JN: How was it working with Mandy Moore? I love her new music.

LK: She was lovely and super professional.

JN: I almost didn’t recognize her in this role.

LK: She fits this time period.

JN: They should make Midway the Musical with all of the singers in the movie.

EK: They have Luke Evans, Darren Criss and Many Moore.

JN: You can sing, Luke and Ed is a rapper!

JN: Nick Jonas stood out in the film also.

EK: His character of Bruno Gaido is a dream role also.

LK: What he did in the film, the guy actually did that.

The thing I liked about this move is that everyone brought their own unique energies. There was no competition on set. Imagine that when you have that many men.

JN: And personalities and egos…

EK: Speak for yourself, [laughs] I’m British, we don’t have egos, yes we do…I think there were no egos because of the subject matter. Everyone was driven to portray that generation of people in the most respectful of ways. It’s such a serious subject matter with the horrors of war and such.

Every character had their own arc and narrative. Everyone had a different vibe. We had a script that served us all, which is very rare.

JN: How did you research the characters?

LK: We went as deep as we could. There’s only so much documentation on these guys. There’s a lot of documentation on the war. The only thing they had for my character specifically was pictures, but he wrote a book six months after the Battle of Midway, so this was fresh in his mind. It’s called The Flying Guns: Cockpit Record of a Naval Pilot from Pearl Harbor Through Midway and you should read it. They could make a movie just from that story. That was a bible for me. I got to hear his voice through the book.

EK: We didn’t show in the movie is when Dickinson crash landed in Pearl Harbor, he hailed down a car going to a picnic. The couple driving didn’t believe that Pearl Harbor had been attacked because they were on the other side of the island. There’s a conversation where the wife says she’s late, but he has to convince her that the battle is happening. Dickinson gets to Pearl, demands to be put in a plane and goes back. There’s so much that happened.

There’s so much bravery that we couldn’t serve every character.

JN: Why not make a TV show?

LK: We could. All of these guys help John Ford make his documentary.

EK: We did. That’s the best thing about it. We are constant students. Me and Luke were not good students in school, but we are top students now!

We take it seriously when we researched our characters. My history teacher, Mr. Oram would be proud of me.

JN: Explain the chewing gum bit in the movie, Ed.

EK: That was something that Roland added in pretty late. When my character goes up in the air, he’s got the ritual of chewing gum and the photograph of his wife. The photograph represents what he was fighting for. The gum is a maverick kind of thing.

JN: What kind of gum did you chew?

EK: Bloody loads of it! It had no sugar. I told them no sugar because I knew I have to chew so much of it. It was a black and green packet. The prop department would unpack them and put them in period cases. I went through so many in one scene that I felt guilty. They would come in and hold their hands out to take them. I would have to forget the manners my mom taught me because we had to shoot.

LK: I thought he chewed gum because he wanted a cigarette and had an oral fixation. People couldn’t smoke in the planes because they could blow themselves up.

EK: We all have nerves. When I watch football games I bite my nails. Sometimes it will be halfway through the game and I’ve bitten them all through. Luckily my favorite team is doing well and I don’t bite them now!

JN: What do you both have coming out next?

LK: I have a movie called Crown Vic coming out.

LK: It’s like Training Day with two cops. It’s me and Thomas Jane for one night only where I’m the rookie cop and he’s the veteran. It’s set in Los Angeles.

JN: I have two independents coming out. One is called Naked Singularity. It’s a director debut from Chase Palmer, who was a screen writer on It. It’s with John Boyega and Olivia Cooke. It’s an end of the world black comedy and drama in a heist movie. It’s like Jackie Brown meets courtroom drama. It’s interesting and a lot of where my passion lies.

My other is one is called Mona Lisa and the Blood Moon. It is directed by Ana Lily Amirpour, who is one of the most beautiful and unique souls ever. We connected and spent a couple of weeks together in New Orleans making it and having a ball!