The Music Man is going to be around for a long time. 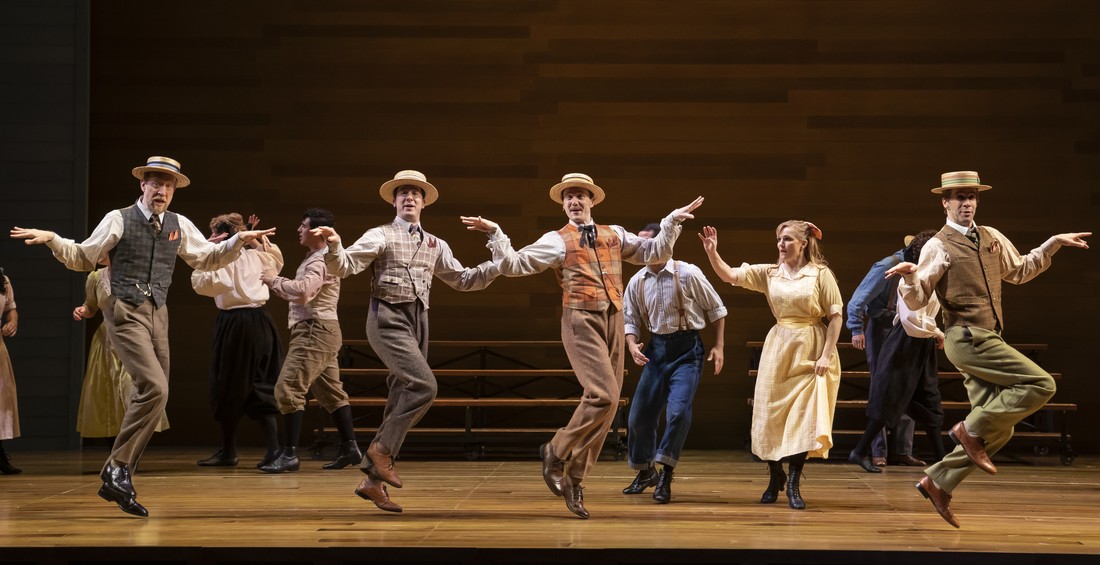 The classic musical The Music Man from 1957 is being brought back to life currently at the Goodman Theatre.

Based on the book by Meredith Wilson, the plot revolves around Harold Hill, a con man who poses as band organizer in a small Midwestern town. The five time Tony Award winner went on to have both movie and television adaptations.

Jeremy Peter Johnson plays several characters in the production, making this his Goodman Theatre debut. His Off-Broadway credits include Pride and Prejudice along with many of Shakespeare’s works. He sat down to talk at the theater on opening night.

JN: How did you wind up in Chicago?

JPJ: I went to Northwestern after that I took a roundabout journey where I was in New York for a total of 10 years. I was in LA briefly and was in Oregon for six years for a Shakespeare Festival where I met Mary Zimmerman and we did Guys and Dolls together. I had some school chums and knew Mary so I decided to move to Chicago. I love it here and there’s a ton of theater. That was about a year ago. I started auditioning and this was the first thing that came up.

JPJ: I am gay. My boyfriend was in the audience tonight.

JN: With your Shakespeare background, have you ever done drag while performing it?

JPJ: I did one show that I recall at the Oregon Shakespeare festival where I played a showgirl. I enjoyed that, but it didn’t launch a drag career or anything like that. Last year I was in New York and doing a production of Pride and Prejudice where I played some females roles. I don’t know if you would call that drag.

JN: Do you have a favorite Shakespeare show?

JPJ: I loved The Scottish Play, of course we can’t say the name in the theater. It has beautiful language. It’s the Shakespearean equivalent of Sweeney Todd. The language goes hand in hand with the most sinister, violent impulses. It’s also one of his shortest plays. I got to do that once. I find it endlessly fascinating. I’m also a sucker for Romeo and Juliet.

JN: Is there a musical you would like to do, but haven’t?

JPJ: Cabaret is my favorite, but I have done that one. I’m a Sondheim nut. I have directed a Sweeney Todd high school production so far.

JN: You are playing multiple roles in The Music Man?

JPJ: Yes, mostly Oliver, who is in the quartet, but I play a salesman on the train and briefly the father in the American Gothic style painting.

JN: Talk about your main character.

JPJ: Oliver Hix is one of the school board members in the town. There are four men who constantly bicker and fight with each other. Harold Hill blows into town and they discover they can sing in four part harmony. It not only gives them a connection to art and music, but also improves their relationships. I think that’s at the core of what this play is about. It’s not just a story about a man that falls in love with Marian the librarian, it’s about how art and music have a healing quality. I actually find it very moving.

JN: Is that why you feel The Music Man is important today?

JPJ: As we all know we are living in a time where there’s plenty of strife and disagreements. We can all participate in music, dance and singing. The trick is you don’t have to be great at any of it, you just have to participate. The Music Man has a heartwarming quality for everybody.

JN: What moments from the show are different than other productions of The Music Man?

JPJ: I have done the show once before and I also understudied Harold Hill, as I do now. This one is different with Mary Zimmerman’s signature style. She has a visual brilliance and her usual team of designers. It’s a big production and there’s a lot to look at, but it’s also a fairly spare stage, which I think allows the action and story to pop. I think we have a very funny cast of actors. They have really mined this show for laughs.

JN: How was it working in Mary Zimmerman again?

JPJ: I just adore her. I consider her a friend now because this is our second project together. I also live about a half of a mile from her in Evanston. She made a name for herself interpreting texts for a modern audience such as Metamorphosis and The White Snake. She is also a consummate director. She understands tone and timing with comedy, characters and relationships. She has that great balance of knowing a piece and having a plan, but she allows artists license to create. We are allowed to be the actors that we want to be. She really loves other people’s creativity. It’s a big ice cream cone of a musical. It’s a fun room to be in. She sets that tone.

JN: Talk about the train sequence at the beginning.

JPJ: [laughs] For me personally, it’s fear driven. We are playing poker with Harold Hill and he’s being the consummate actor and actually playing the game, but I’m not. I’m so desperate to not miss my cue. You can so easily, no pun intended, derail. It took a long time to learn.

JN: It looks tricky. Is it about being in synch?

JPJ: The tempo is really fast so you have to be in focus and have your concentration on.

JN: Was there a lot of rehearsal for that scene?

JPJ: We took about four passes at it until we mastered it, then picked up the tempo.

JN: Has the cartoon Family Guy ruined the song “Shipoopi?”

JPJ: This is such an old warhorse of a show I don’t think so. The Music Man is going to be around for a long time.

JN: You were in the movie My Best Friend’s Wedding?

JPJ: To be honest, I was on the cutting room floor. It shot here in Chicago. I was one of eight chefs cleaning up at the end of the wedding. We were putting up the tables and cleaning up the cake while singing “I say a little prayer for you.” They were going to roll the credits through that then they decided they didn’t like it.

JN: What were the challenges of being in soap operas?

JPJ: It was very early in the morning and goes very fast. In The Music Man we rehearsed for a month before we had tech. That’s a long time for a play. With a soap opera, sometimes they finish the script the day before. You wake up before the crack of dawn, they put you in makeup and you in front of an audience on camera. I had fun.

JN: You have big plans coming up?

JPJ: I am doing Oklahoma at Skylight Music Theatre in Milwaukee, Wisconsin. I am going to play Jud. Right after that closes, I am going do a play called The Nerd at Milwaukee Rep. The Nerd is an early ‘80s comedy written by Larry Shue. It’s hilarious. I was laughing out loud when I read it. It still holds up years alter. The character is understood to be gay, but they don’t explicitly say so. He’s a Charles Nelson Reilly type that’s always undercutting everybody and smoking!

The Music Man marches on until August 18 with tickets at GoodmanTheatre.org.