My favorite musician that I look up to is Elvis Costello. 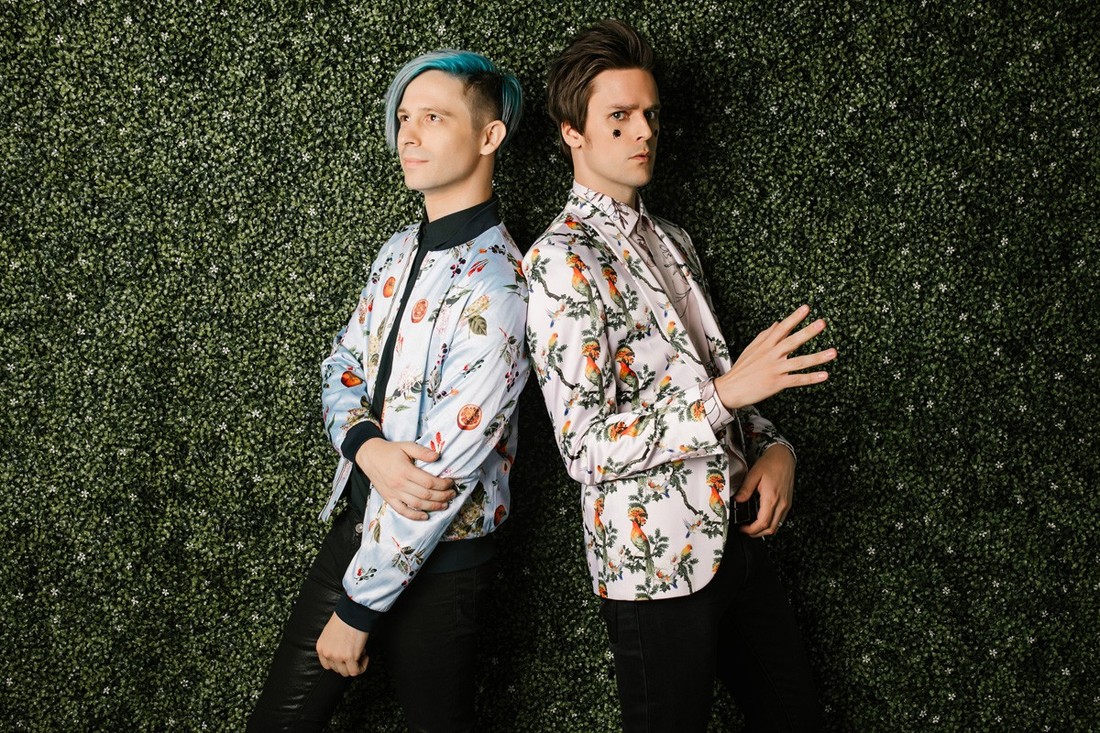 i don't know how but they found me

I Don’t Know How But They Found Me is the unusual name for a band made up of Dallon Weekes and Ryan Seaman.

Weekes many will know from Panic! at the Disco where he performed as a backing vocalist, bassist, Keyboardist and songwriter. He left to work on this project with Seaman who is the drummer for the new band. They worked together before as The Brobecks.

Their single together “Choke” has topped the alternative music charts and a cabaret version of the song was recently released.

Weekes chatted on the tour bus about his career and spoke about being a LGBT ally.

JN: (Jerry Nunn) Do you watch a lot of TV while on tour?

DW: (Dallon Weekes) We have DVDs of The Office so that’s what I am watching now.

JN: Did you grow up playing instruments?

DW: Not until I was about 15. I wanted to from the time I was about four or five. It was not something that I was ever really encouraged to pursue when I was a kid. It was because everyone involved in rock music was a low life scumbag, drug addict according to the people in my life. As I got older I never lost interest in it. I bought a guitar when I was 15, much to my parents dismay. They are onboard with it now.

JN: You were raised very religiously?

JN: How did you wind up being in bands?

DW: It was something I always wanted to do. I think it took a while for my family to realize that it doesn’t have to be a debaucherous, awful thing. It can be a job if you treat it that way.

DW: Exactly. It could definitely be a party if you want it to, but you probably wouldn’t last very long.

JN: Where did the name for this band come about?

DW: It came from a line in the movie Back to the Future, which is my favorite movie. There’s something about that phrase that I’ve always really liked. I always wanted to use it as a lyric or a song title. When we started this project we did it in secret. we would book shows and not tell anyone, even fans, what we were doing. We wanted the music we were making to stand on it’s own two feet. That phrase seemed to fit our whole M.O. of secrecy. I finally got to use it for something.

JN: How was it moving into the frontman position for this band?

DW: It took me a minute to remember how to do it. In Panic, I had been the bass player and background vocalist for about eight years. Before that I had been a frontman for my own band.

It took a little bit to learn how to get back into that role.

I’m in a good spot now. It feels very natural and I’m really comfortable with it.

JN: There’s no bad blood with Panic! at the Disco?

DW: Not at all. It was a really great job. It lasted way longer than I ever expected it to.

JN: What was the concept behind the “Choke” video? It seemed very ‘80s.

DW: Yes. I fell in love with European pop chart shows that were on during the ‘80s like Top of the Pops. we were trying to chase that vibe of what those shows were like at that time. A lot of the artists that performed there weren’t excited about having to lip synch and that really showed.

JN: What inspired the song “Do It All the Time?”

DW: I think it’s the most sarcastic song I’ve ever written. It’s a critique on the whole do what you want philosophy. It’s about the state of pop music in general.

I think that philosophy shows up in a lot of pop music these days, but I think it’s a bad philosophy. It fails to take into account that what you want may not be good.

JN: Was there a musician that you looked up to that made you want to be in the business?

DW: My favorite musician that I look up to is Elvis Costello.

DW: Absolutely. As a songwriter and performer he’s fantastic. The best concert I have ever been to was Elvis Costello 10 years ago. I’ve seen him a few times. He played my hometown once. I believe that was my favorite show that I’ve ever seen. There was one point where he turned off all of the equipment and wandered the aisles with an acoustic guitar, no microphone or anything. It was very inspiring.

JN: He should make musicals. Speaking of musicals, you covered Little Shop of Horrors.

DW: Yes, years ago. I fell in love with that one as a kid, especially the music. I recorded that one at my kitchen table just for fun.

JN: Have you seen Book of Mormon?

DW: I would if I could see it for free. I don’t want to pay someone to make fun of me. I have heard the soundtrack a bunch of times. It’s funny.

JN: Have you heard about the LOVELOUD festival in Utah?

DW: Yes. I’ve thought of being a part of it for the past two years because Tyler Glenn from Neon Trees is my friend and a big part of the show. I would really like to be a part of it. It has to be the right circumstances. It’s an important festival, especially in my hometown.

JN: Well, hopefully the festival goes again and you can join in. Where do you see this current band going?

DW: Hopefully upward and onward. The trajectory has been really unexpected. We started this band with zero expectations. I want to keep it that way, then everything is an amazing bonus every step of the way.

DW: We’ve got some shows overseas. We have a tour we are doing with Silversun Pickups. Hopefully, we can start the process of making a full length record too. It’s mostly written. We are just looking for the green light for the recording process started.

JN: How did you develop your live show?

DW: It happened naturally. I think playing in secret helped to develop it without any pressure. That’s why we denied that it even existed for about a year. We could make it what it is without being under a microscope.

JN: Anything else you want people to know about the band?

DW: I hope people like it. It’s my secret hope that even if they don’t like it, that it will open a door to something they will like. Maybe music they didn’t know about beforehand like Elvis Costello or David Bowie. I want to introduce that to the kids too.

JN: Speaking of kids, you have a beautiful family that I saw on Instagram. Where do you live?