I feel so fortunate to have the partner I have for 28 years now, and a family we started late in life. 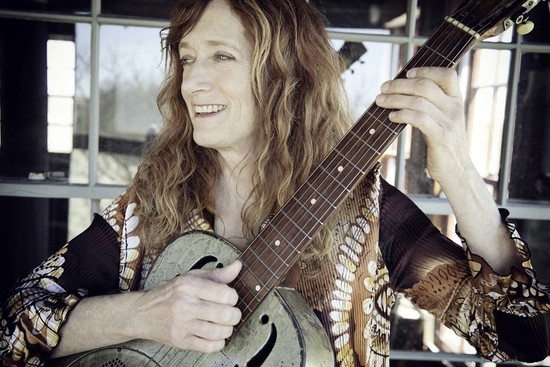 Out singer/songwriter is rapidly approaching her 30th year as a recording artist. Her latest disc is the radiant and raw Still Green (Signature Sounds). An extraordinary guitarist, Larkin stretches the bounds of traditional folk incorporating influences ranging from jazz to rock, with the occasional bit of programming thrown in (check out the loops on "Mando Drum" and "So Cold"). A musical journey of healing and heartache, Still Green is a verdant collection of tunes that highlights Larkin's ability to make us cry, laugh and think, all set to immediately appealing and unforgettable melodies. I spoke with Larkin shortly before the release of the disc.

Can you please say something about the role these well-known musicians play in your life?

PL: (Patty Larkin) All of the people who joined me on 25 were and still are people whom I admire greatly and whom I had worked with over the period of my career. Someone such as Jonatha Brooke, I just admire her work so greatly. She comes up with these really beautiful vocal ideas. I think she's really creative. I've toured with Merrie Amsterburg and I'm a big fan of her music. I found (producer Mike Denneen) through Merrie, so there's this whole Boston link.

GS: Birdsong At Morning, who performed on 25, can also be heard on Still Green. What do you like about working with this trio?

PL: Alan Williams is the main songwriter and lead vocalist for Birdsong At Morning. He and his wife Darleen Wilson are old friends of mine. Dar produced my second album in 1987 and is an old friend of my partner Bette's. I'm emotionally close to them.

GS: In the liner notes for Still Green, you write that the songs were culled from "journals, digital recorders, cell phones, smartphones, scraps of paper, from memory and dreams."

GS: Is this typical of your songwriting process?

PL: This is a new batch of songs. The last was 2008. That process was more, get up in the morning, go to my friend's barn and write and put stuff down on my ProTools rig on my computer. For this one, my studio wasn't up and running. I upgraded my entire studio and just hadn't gotten it together [laughs]. A lot of it was on my cell phone and iPhone and digital recorder, which I take with me when I visit my family and record in my hotel room or my room. The interesting thing about that process was that I thought I had 40 or 50 songs. It turns out that I had maybe six or eight finished songs, and 34 snippets. Once I put it on the voice recorder, I thought, I'm going to get back to that. It was a different few years. I didn't have the wherewithal to get back into these long writing periods. I started going through stuff and said, "Wow, I like this song, but I need to finish it" [laughs]. Towards the end of the writing process, I thought, you need to go back to the notebook. These tools are great for putting down the ideas, but then you need to go back and listen to them once or twice a week so that you know where you're at. I still haven't culled all the ideas out.

GS: Over the course of the disc you take the listener from "grief" in "Best of Intentions" to gratitude in "Because of This" – do you think that you wouldn't have made the journey yourself if you hadn't been able to turn these experiences into songs?

PL: No, I think the songs are a reflection of the journey. It's very internal. There's a reason why, in the Jewish tradition, that you have this service about a year afterwards, because I found that this whole year you're still in mourning or it's reminiscent of what happened a year ago or here's a holiday and I can't call. My dad died a year ago in September, but this time of year I still know what I was doing. I feel so fortunate to have the partner I have for 28 years now, and a family we started late in life [laughs]. I feel full of emotion and joy. I told a friend of mine that I cry almost every day with joy. The beauty of these children and the companionship I have and how fragile life is. I'm seeing how my life can be as a writer and musician and then as a mother.

GS: Being a singer/songwriter of literary merit, it's not surprising that Kay Ryan's poetry found its way into your music, as it does. You even make reference to "humming…some little poem" in "Soon As I'm Better" and "all the poems jangling in my head" in "My Baby." Is interacting with poetry a part of your daily routine?

PL: It gives me points of reflection. I think the deeper fiction works, for me, shows me what someone can do with ideas and words and I get amazed by the story unfolding. For me, poetry really feels closer to what I do in terms of that one line that encapsulates the idea and emotion. Kay's poetry definitely does that for me. My friend (musician Peter Mulvey) sent me a book of her poems. I love his writing and I love when we tour together because we talk about different writers. They immediately struck me as songs. The rhyming couplets or the internal rhyme she has is something that I love doing, as do other songwriters. Sometimes I go, what can you do with words? Or what has someone I admire done with words? I just started singing to that poem ("Green Behind The Ears"). That's kind of rare for me, in a way. I've done it as a writing exercise, but this was like, "Oh, wow, what am I going to do with this? I really like this!" I started singing it out almost immediately because it's really close to my process, really close to what I was going through in terms of my kids and what I had just experienced through my sister's illness and the death of my mom. "So much freshness to unlearn," is the line. How tender and green we are. I got really sad, very emotional. This one poem brought all that in for me in just a few sentences. She has that talent.

GS: Do you know if Kay has heard Still Green and more specifically "Green Behind The Ears"?

PL: She has definitely heard the song. We waited until it was fairly well along, until Jonatha was on it, to send it to her for permission. She responded almost immediately. We got to her through friends of ours, a poet friend. She's been very generous. She doesn't want a fee for it. I need to find where to send the album because I would love for her to have a copy.

GS: While on the Cape, do you ever cross paths with poet Mary Oliver?

PL: [Laughs] I've been to her house in Provincetown, but she wasn't there. Artist friends of mine were staying there, friends of hers. I'm a big fan of hers as well. I haven't had the chance to meet her yet. She's got a lot of fans worldwide.

GS: You sing about coffee in "Mando Drum" and name check Starbucks in "New Hotel." Is there something you're trying to tell us?

PL: [Big laugh] Those are two really different songs. We had gotten to the tea point, the Earl Grey in the morning and maybe a little in the afternoon. Then we adopted our first daughter [laughs] and it was back to the coffee. We try not to make it too strong. It's definitely a lifestyle for me. The reference to Starbucks in "New Hotel" is somewhat ironic. I was writing that song in a really beautiful field and I wondered why was that hotel there, why that (highway) exit with nothing else. I just see the process, the exurbination of America. These little farm fields in Pennsylvania, or wherever I was, why here? You travel to Canada and you can go for a long time, like an hour, which by American standards is a long time on the road, without a gas station, without a McDonald's or anything. And yet, when I do see the Starbucks sign in 10 or 15 miles, I'm going to wait [laughs]. I know there is at least some standard of excellence there. The song "Mando Drum," that's just something that I had the loop for for years and it was fun to be able to write lyrics for it. It was a fun thing to put together.

GS: I recently interviewed filmmaker Jill Soloway about her wonderful new movie Afternoon Delight. The movie features a nice score by Craig Wedren (of Shudder To Think fame). Do you have any interest in writing film music?

PL: Yes [laughs], I do. It's one of those "things" where my songs have been used in film. To me, when I write, I see the film, I see the movie of where I was and the scene I want to re-create. The closer I get to the visual I have the more successful the song is for me. I think that's what the albums become for me. As I'm singing them, they become the soundtrack and touchstone for my life. I'll think, "that's what I thought the song was about when I wrote it three years ago, but now it's about this." I haven't done any scoring, but it's really of interest to me. I have two different album projects I want to do. One is an album of covers and one is an album of instrumentals. That's my plan.

GS: Maybe some of those instrumentals will find their way into movies, too.

PL: That would be great. When it has happened for me, in the use for film, I've been really delighted. I've been very lucky.

GS: Patty, what can your fans expect from the upcoming tour?

PL: I'm doing a national tour. My job is to showcase the new music and to talk about the ideas on the album.

Patty Larkin performs on Nov. 24 at the Old Town School of Folk Music.