She’s so delightful: an interview with Cyndi Lauper

Professionally, I think that having success you should pay back, use the fame you achieve to give voice to some that don’t have a voice. 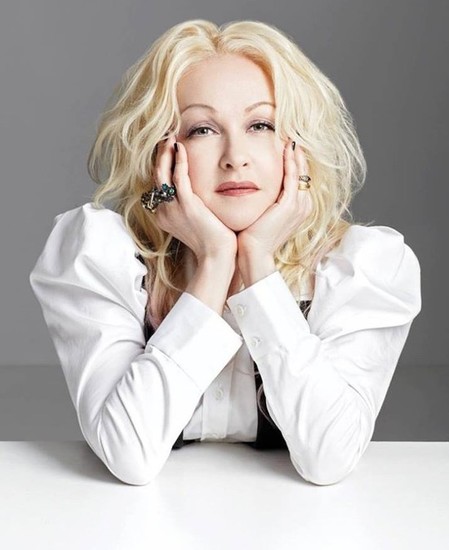 Cyndi Lauper has had quite the year. Her revelatory autobiography Cyndi Lauper: A Memoir was a New York Times bestseller. In June 2013 she won a Tony Award for Kinky Boots, her musical adaptation (with Harvey Fierstein) of the movie of the same name. Lauper also returned to the dance charts with her rendition of "Sex Is In The Heel" from Kinky Boots.

Never one to rest on her laurels, Lauper is currently on tour celebrating the 30th anniversary of the release of her groundbreaking 1983 album She's So Unusual. With no plans to take a break from her boundless activist and charity work, Lauper hosts and performs at the third annual "Cyndi Lauper & Friends: Home for the Holidays" benefit concert, Dec. 7, at the Beacon Theatre in New York. The show, which helps to raise awareness about homelessness in the LGBT youth community and funds for the Forty to None Project, also features performances by P!nk, Josh Groban, Susan Sarandon, Nelly Furtado, the Indigo Girls, Rosie O'Donnell, Ingrid Michaelson, Matt & Kim, Carson Kressley and others. Madonna may talk the talk, but Cyndi Lauper has ALWAYS walked the walk. I spoke with Cyndi in October 2013. (Cyndi Lauper performs on Nov. 1 at the Chicago Theatre.)

GS: (Gregg Shapiro) Six years after you launched the first True Colors tour, the True Colors Fund is still going strong with the third annual "Cyndi Lauper & Friends: Home for the Holidays" benefit concert, scheduled for Dec. 7, 2013 in New York. What does the success of True Colors Fund mean to you?

CL: (Cyndi Lauper) When we started the True Colors Fund five years ago to continue the work of the True Colors Tour, I never imagined we would get this far in such a short period of time. Major milestones being the launch of the Give a Damn Campaign in 2010 and the Forty to None Project last year. The Give a Damn Campaign has provided a unique voice to inspire everyone, especially straight people, involved in moving equality forward for all. The Forty to None Project has filled a significant void as the first and only national organization solely dedicated to ending gay, lesbian, bisexual, and transgender youth homelessness. The fact that we have been able to help provide these young people a voice, especially in Washington DC, is something I am particularly proud of. This is a fixable problem, we can bring the number of homeless youth who are gay or transgender from 40 percent to none, we just need to work together.

GS: The Matthew Shepard Foundation was an early beneficiary of the True Colors Fund. We recently marked the 15th anniversary of Matthew's passing. Have you remained in contact with Judy and Dennis Shepard and were you able to speak to them at that time?

CL: I continue to be in awe of what Judy and Dennis have accomplished over the past 15 years. The choice they made to start the Matthew Shepard Foundation and to share Matthew's and their story has helped transform the world in such a positive way that I do not think we can really understand the full impact of their work. Sharing one's story, especially in the face of hatred and bigotry, is one of the most courageous things a person can do in life. Judy and Dennis have inspired so many people through their example to share their stories and the impact of that sort of change is immeasurable.

GS: The True Colors tours and subsequent benefit shows have always had a fascinating array of performers, both LGBT and straight. What is involved in your process for selecting musical guests?

CL: Pretty simple really. We approach artists that have always shown to be supportive of human rights issues. We also go after artists that we know will put on an amazing show and this year is going to be great! We have P!nk, who I love, and (who is) a strong supporter of LGBT rights. We also have Josh Grobin, Matt & Kim, Rosie O'Donnell, Carson Kressley, The Hives, Ingrid Michaelson, and Indigo Girls who have always been a favorite of mine, who have supported True Colors Fund since I started it.

GS: The line-up for this year's "Cyndi Lauper & Friends: Home for the Holidays" benefit concert is no exception. How, for example, did actress Susan Sarandon and musical duo Matt & Kim come to be involved.

CL: I have known Susan Sarandon for a long time. (She's) someone that I have admired for a long time. She has always been an outspoken supporter of the gay community. Matt & Kim are friends of mine. My manager and their manager are friends so we met a while back. But I was a fan of their music even before I met them. They are really nice kids.

GS: You recorded the song True Colors almost 30 years ago, and it is a song that has taken on a life of its own, for you and for others.

CL: When I recorded that song, I had a friend (named Gregory) dying from AIDS. When he got really sick, he said, "Hey, write a song for me so I am not forgotten." Then this song was brought to me. I didn't write it. Billy Steinberger and Tom Kelly wrote it, but when they brought me the song, I just wanted to sing it for my friend who had been told most of his life he was no good just because he was gay. He was thrown out of his home for being gay. I just wanted to let him know that he was perfect the way he was. I sang the song for him but then it took on a life of its own and I'm very proud that it has become so important to the community and that it connected the way it did.

GS: I remember seeing your altruistic nature for the first time when you sang on and appeared in the video for USA for Africa's We Are The World. What role does giving back to others play in your life – both personally and professionally?

CL: You always have to try and be the best friend, mother and wife you can be. I am far from perfect, but I do try. I fail a lot; but I do try and be there for those in my life. Professionally, I think that having success you should pay back, use the fame you achieve to give voice to some that don't have a voice. (It's) just the right thing to do.

GS: I recently saw Margaret Cho, who performed in one of the True Colors tours, in concert. She did an affectionate and spot-on imitation of you. Have you ever heard her do it and, if so, what do you think of it?

CL: [Laughs] I have and it's hysterical! Margaret is a great comedian.

GS: Do you, by chance, do an imitation of Margaret?

I'm not very good at that type of thing, but I do adore her.

GS: In addition to your philanthropy and your music, you are also the Tony Award-winning composer for the musical Kinky Boots. What does it mean to you to be the first woman to win a Best Score Tony (solo)?

CL: I am proud and humbled. To find such acceptance by the Broadway community is an honor.

GS: You also became a best-selling author with the publication of your 2012 memoir. What was the experience of writing your memoir like for you?

CL: It was very therapeutic, to be honest. It was great to go back to the beginning of my journey and what brought me here today; both personally and professionally

I tried to be as honest as possible because if you are going to share your story you owe it to your fans that buy the book.

GS: Finally, you are on tour commemorating the 30th anniversary of your solo debut album She's So Unusual. What does that album mean to you, 30 years after its release?

CL: It has been an amazing 30 year journey. The fact that this album is still loved by my fans after all this time means a lot to me. I never would have imagined back then that 30 years later we would be celebrating its release. Wow [laughs]! I am a lucky woman and (as) excited about my career now as I was 30 years ago.