The Spirit’s in it: an interview with Angelique Kidjo

If you think that what you are going to lose by making a statement is greater than telling the truth – I'm not here to judge. 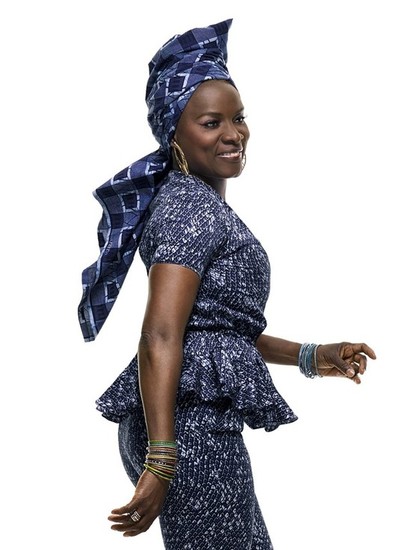 Benin, West African singer/songwriter Angelique Kidjo was inspired to tell her story in her memoir Spirit Rising: My Life, My Music (Harper Design, 2014), with Rachel Wenrick, following the death of her father, with whom she was very close. Full of color and black & white photos, reading Spirit Rising feels like Kidjo is sharing her family and professional scrapbooks and journals with you. She even included some recipes in the book, giving it a unique flavor, if you will. Kidjo's book was released at the same time as her new CD Eve (429) and now she is on the road, performing concerts and doing book signings. I spoke with Angelique about the book and her life in early 2014. [Angelique Kidjo performs on Feb. 11 at City Winery in Chicago.]

GS: (Gregg Shapiro) Angelique, as you were writing your book Spirit Rising and you spoke with your siblings about your individual experiences of growing up in the same household, did you find that you maybe have different memories of the same events?

AK: (Angelique Kidjo) Oh, definitely! We have different memories, we have different recollections and we have different understandings of things. That's what is good about being in a big family. You hear people telling you their stories from a different perspective that you never thought was like that. You thought it was something else. For me, it was a very interesting process. I just kept the ones that impacted me, that were mine.

GS: Memoirs by musicians have become popular in

recent years, including those by Patti Smith, Rosanne Cash and Cyndi Lauper – were any of those books an inspiration to you?

AK: No. The Patti Smith one was really interesting. I Put a Spell on You by Nina Simone was a good one, too. I just think we had different lives and different recollections of our lives. Those people were older than me, they lived at different times. That's why I kept mine in the time I lived in.

GS: You write about the practice of speaking openly in your parents' home on many subjects, including sexuality. Do you think that that openness had anything to do with your mother being in the performing arts where she would come across a diverse group of people?

AK: I think that is part of it. She was so passionate about theater. She would write a theater piece and produce it, do the costumes. When you are a storyteller, writing a piece on somebody's life, you have to try to be in the person's shoes. Also, because my parents were educated and went to school, they knew that what you don't talk about, if there's an elephant in the room and you don't talk about it, sooner or later it will impact the life of your children. (The children) will want to go out and find answers themselves and they may find themselves with someone who is not well intended and give them the wrong answer. Then, it's your responsibility as a parent to be open enough to bring that to the surface and say it's OK to talk about it.

GS: Have you taken that same approach in your own family with your daughter?

AK: Yes! My daughter's going to turn 21. We're still pretty close with her. She tells us some things. She's not like one of those kids who doesn't want to talk. We pretty much know all of her friends. If she's in any relationship, we talk about it. We don't give advice because, that's what my parents always said, "We don't give you advice. You tell us, we'll help you through. You've got to find a solution and make your own decisions. We can't make decisions for you. We can, but we don't want to."

GS: There is a delightful description of your husband Jean where you wrote "he's like a duck swimming in a pond: calm and relaxed above the surface, but paddling furiously underneath." How did Jean feel about being described in this way?

AK: Because he's like that…[laughs], he's just exactly as I said. That is good with me. I just say what is on my mind. He's a man who thinks about what he's going to say before he says it. Also, I am outgoing and exuberant. He's the one who's watching his surroundings all the time, to see what's going to happen. He's always thinking forward about everything. I think it's a cultural thing. My father told me I have to think before I speak or do things, that your first instinct is always the best. Of course, my husband is not like that. He has a master's degree in philosophy.

GS: So you are the yin to his yang.

AK: Exactly! That's why we've been together for 26 years.

GS: I want to ask you about music and activism, a subject that echoes throughout the book. For example, you write about performing in Zimbabwe under Mugabe rule and about how you intended to stand up for what is right at a concert, "I'm not going to be careful. I'm mad as hell." How do you think we can get more musicians to take a similar stance?

AK: It depends on each one of us. Everybody's comfort zone is different. If you think that what you are going to lose by making a statement is greater than telling the truth – I'm not here to judge. But if somebody from that country tells me that they speak for us, I speak out.

GS: Speaking of Mugabe, how do you feel about his anti-gay rhetoric and actions?

AK: The anti-gay rhetoric that is coming out of Africa is something that has been stirred by religious groups that are there. They're the ones who bring that as an issue. Even though homosexuality has never been spoken about openly in Africa, it has existed there for centuries. Nobody can deny that. When religious leaders say to leaders of countries, "Homosexuality is like pedophilia" and they combine those two things, people get scared. How can you hold the bible and say you love people and you are speaking the words of God and you decide that a community of human beings will have to be banned because of who they love? Did you bring them into this world? Are you God? You play God and it's dangerous. People have been following what you say because you are a preacher and you know better, following what you say as the word of the bible and all you want to do is kill people. I don't understand any of it. It makes me uncomfortable and mad! Just let people be.

GS: You close the book with a section titled "Recipes From My Life." Do you have plans to expand on this section with a full-length cookbook?

AK: Probably. I don't know yet. I take everything as it comes. I don't know what is lying in my memory. There's a lot of stuff in my head. When the inspiration comes and tells me that's what we're gonna

GS: I'm a vegetarian. What is your favorite vegetarian dish to cook?

AK: My favorite vegetarian dish to cook is red lentils with fennel.

AK: When you cook the red lentils with fennel you have to add some turmeric to it. I'm all for herbs that heal and feed your body, too.

GS: As you write in the book, you have a long history of musical collaboration and your new CD Eve is no exception. One of the most fascinating collaborations is with (openly gay) Vampire Weekend member Rostam Batmaglij on the song "Bomba." How did that collaboration come about?

AK: I know them and I know how African music plays a role in their own rock and roll. They are fans of mine and we said that we would collaborate at some point. Maybe one day we'll do something more. It's a matter of inspiration. What I was thinking about is exactly what he gave me. But I didn't know how to express it as I don't read music. I just know that if you are a musician and a fan of my music, you will know instantly what is needed and what is right.

GS: With both a new CD and a new book out, will you be doing readings from the book during concerts or singing songs from your new CD at book signings?

AK: Yes, I have been doing a couple of songs at book signings. I have that going. I cannot do both [laughs]. I either have to sing or I talk. I have to reserve my voice for singing. You don't talk and sing at the same time.