I think we really try to bully the bullies. 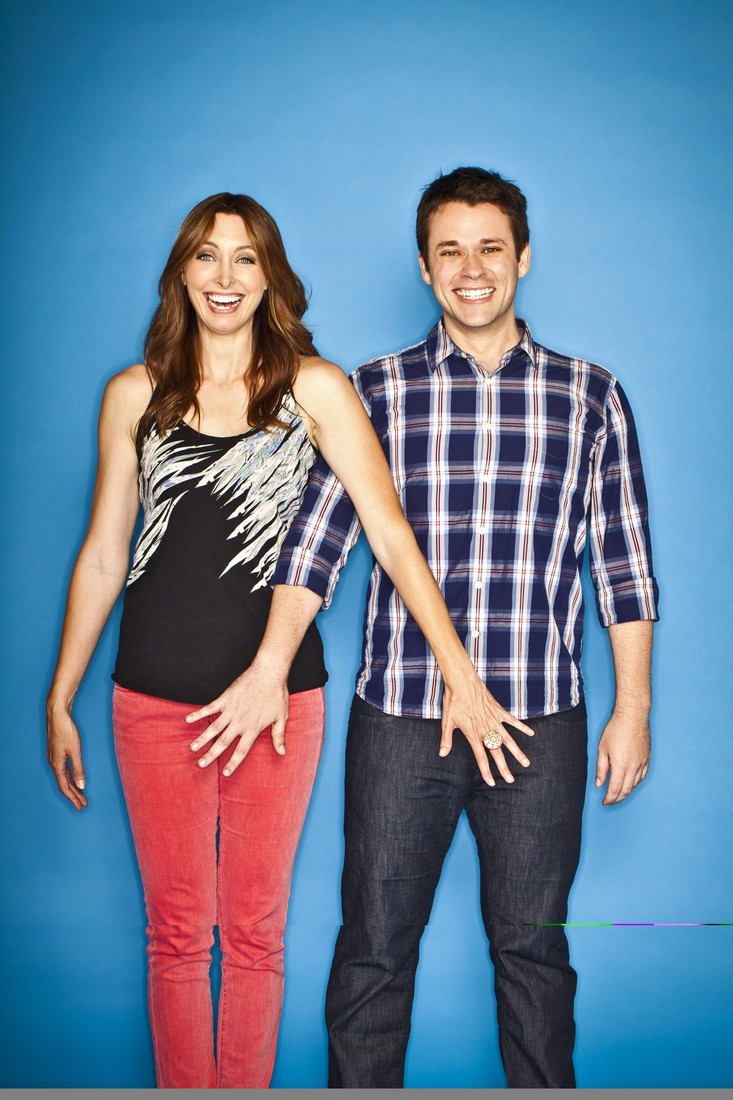 Funny or Die’s Throwing Shade is debuting as a series on TV Land in January. The hosts are Erin Gibson and Bryan Safi. It will feature skits and social commentary in an unscripted setting.

Gibson studied at Second City Chicago, IO, and Upright Citizens Brigade. She has appeared on SuperDeluxe’s [“(Layers)”] and King of Queens.

Safi worked with the Groundlings and UCB. He appeared on television’s Modern Family and A Deadly Adoption on Lifetime.

During a Chicago stop on their podcast tour Nunn met the duo at their hotel to discuss Throwing Shade.

JN: (Jerry Nunn) Start off talking about your podcast.

BS: (Bryan Safi) We have a podcast where we talk about LGBT and women’s issues. We like to talk about politics with pop culture references because that is the framework we understand it in. It is stupid and silly. It goes on tangents constantly.

EG: (Erin Gibson) We started it because Bryan and I used to be on a show called InfoMania on Current TV. It was so popular they had to cancel it. Even though it was cancelled we still kept doing our segments. Mine was called Modern Lady and Bryan’s was called That’s Gay. We just put it together as a podcast. It was a lot better because we could say what we wanted. There were no limitation of what we could and could not say like on TV.

BS: Our backgrounds were in theater so we were able to improvise with these crazy characters and talk about serious things.

JN: Now it will be on TV Land?

BS: Yes. Right now that starts on January 18. I am not sure how much that date will shift. It is a half hour. It is a similar idea, except there will be an audience. It will be sort of a John Oliver mixed with an Amy Schumer. Our backgrounds are in sketch but we will be at a desk saying silly things about serious stuff. It will break off into bits and sketches. We will have great guests who will discuss things with us.

JN: Who is a dream guest you would want?

BS: Well, the pilot we filmed so we have one so far.

EG: Wynonna Judd and Dolly Parton would be dream guests.

JN: Have you met Dolly Parton?

BS: I met her at a book signing once. She called me Butterfly!

My dream guest would be Ina Garten, the Barefoot Contessa.

EG: Jillian Anderson. Trixie Mattel. We have a list…

JN: How does your live show work?

EG: It is two person stand up essentially. We start off light about what we have been doing. Then we both talk about two different issues taking turns. I talk about what women have gone through this year.

In Chicago one of the news stations told their female reporters that they weren’t allowed to wear hats unless it was 20 degrees or below because women don’t look good in hats.

That is one of my stories but I talk for 20 minutes.

BS: I talk about the resurgence of gay conversion therapy and how it is in the republican platform this year. It is experiencing a boom. It is insane.

There are a million jokes in the show but the core is very heavy. It is not like a podcast, more of a stand up.

EG: We improvise lightly but it is mostly written. The fourth act is a hundred percent improvised. We are calling the Family Research Council.

BS: The audience gives us the name of someone calling us and the subject that we talk about. Last night someone said a name Releta Magneta and how we have to return faulty sauerkraut at the store.

EG: They are very benign and silly.

BS: Every night we are calling the Family Research Council and leaving voicemails every show that are bonkers!

JN: Do they ever call back?

BS: Never. We disguise our number.

EG: We have a full blocker on that number. They don’t know who we are or what is happening or why the audience is laughing.

BS: Tony Perkins produced the gay conversion therapy amendment in the platform with the Family Research Council so that is the reason we wanted to do it.

EG: We were going to call Mike Pence but his voicemail is disconnected, but the Family Research Council is waiting for your call.

JN: No one answers?

BS: No. It is just a voicemail.

EG: We have the directory written down so we call specific people every night. It is not a general voicemail. We target people in the most insanely benign way.

JN: Where are your backgrounds?

EG: I’m from Houston. We came to LA to do comedy and met at UCB Theatre.

BS: We started working together pretty quickly after that.

JN: You both have done sitcoms.

BS: We have been all over your televisions.

JN: What was your favorite show?

BS: My favorite thing I got to do last year was when Will Ferrell and Kristen Wiig did a strange Lifetime movie. It was two weeks long and I had a nice part in it. It was me hanging out with Kristen Wiig at a farm stand for hours a day. It was a blast.

I did a video with Jesse Tyler Ferguson for Funny or Die. I was called the first gay bachelor. You know how this Finding Prince Charming show is happening? It was like that with George Takei and Jess in it. They find out the bachelor is the least interesting one in all the house of bachelors. They all fall in love with each other.

JN: What do you think of Finding Prince Charming?

BS: I am all for equality including trash television. I think that is wonderful.

EG: It shouldn’t be held at any other standard.

BS: It is not positive on NBC or Logo. It is garbage and I love it!

Erin was nominated for an Emmy this year.

EG: It was for Gay of Thrones. All the stuff I have done on TV has been fun but that one I am proud of. Well, aside from Throwing Shade. I will love you in my heart forever.

BS: I feel the love.

JN: I heard your name is mispronounced often, Bryan.

BS: It’s Safi like coffee. I give zero shits to be honest with you.

EG: I’ve said it wrong sometimes. Have you noticed?

JN: When do you record the podcast?

BS: We always record on Monday and it comes out every Thursday.

EG: We have been doing it for years straight every Thursday.

BS: It comes out every Thursday morning on iTunes and everywhere.

JN: I have heard people want it at a certain time every week.

EG: It is a commute to work thing.

BS: People crave that hour when they have to drive to work.

EG: When you have a day job that is mundane you might want something more distracting. I think that is why podcasts have been so successful.

BS: We try to come once a year.

EG: I used to live here. It is one of my favorite cities. I went to Second City here.

JN: Do you go out after your shows?

EG: We take a melatonin and we go right to bed! Everyday we have a new show and have to get to the next city.

BS: It is unfortunate that we never get more than a night here. I have been to Chicago so many times but never been beyond the hotel to the venue. I would love to come and really spend time here. I have never even been to Boystown.

EG: We have been to Navy Pier.

BS: Well, we have been there…

JN: Have you ever thrown too much shade?

BS: I think we really try to bully the bullies. They have done such horrible things so we might not go hard enough on them.

EG: We try to attack the people that deserve it with our show.