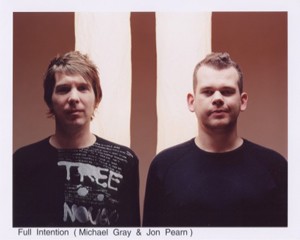 While many of you who read this have probably heard of-and could easily indentify-Thunderpuss or Rosabel, there is another remixing/production team that you’ve more than likely danced to and enjoyed listening to even though their name may not be nearly as familiar. I speak of Full Intention, the U.K. production team comprised of two lads who hail from Surrey, which is just south of London. Full Intention, consisting of Jon Pearn and Michael Gray, has been going strong for 10 years, garnering the utmost in respect from DJs and dance floors around the world. In 2004 they received their first Grammy nomination for Best Remixer for their work on George Michael's "Amazing." Despite their very busy schedule, I was lucky enough to slow Jon and Michael down to get them to answer a few questions in this exclusive interview.

DP- How did you each come to be in the dance music industry?

Jon Pearn (JP)- I was originally a classically trained musician. In my teens I played in a couple of Jazz/Funk bands but got hooked on dance music around 1988.

Michael Gray (MG)- I actually started collecting records at the age of 6. By the time I was 12, I was DJing all-ages discos for kids 16 years old and younger. From there I went to DJing adult nightclubs at about 17 and finally made the move into the studio when I was 25.

DP- How and when did Full Intention come into being?

JP- I met Mike at a nightclub in south London where he was DJing. He asked me if I'd like to bring some keyboards down and have a jam. This was around 1988. We shared a love for a good phat bass groove and started working together in the studio.

Throughout the early 1990s we worked under several pseudonyms – names such as Greed, Friends of Matthew, and Hustlers Convention.

The use of the name Full Intention started in 1995 with a series of underground EPs on Sugar Daddy.

DP- What were the early years like for you guys... did you meet with quick success or were there years of struggle?

JP & MG- Initially for the fist few years in the U.K. we felt that certain DJs weren’t giving us much support, especially on the radio. This was due probably because the scene we were making music for was dominated by American producers and we were just two guys from Surrey! We first started to get serious attention when we released "I Love America." We did a bit of a scam, releasing the record from New York and inventing American names for ourselves, which led to the record hitting all the right record shelves.

This seemed to do the trick!

DP- Which category of dance music

- Classic Chicago house, Detroit techno, garage house, Disco, R&B/Funk – has had the biggest influence on the style of music you produce?

DP- While many who have attained success in the dance music industry on the production end have leveraged that success into lucrative DJing careers, I don’t see or read about a lot of Full Intention playdates or tours.

JP- I've never really considered myself a DJ as I'm a musician and producer.

When we used to have DJing gigs together, I'd concentrate more on acapellas and FX using a sampler/keyboard.

These days I much prefer to be in the studio although it’s nice to get out occasionally to see how the crowd reacts to new tunes.

MG- We both have a love of the studio and we are lucky enough to get offered a lot of work which doesn't really leave us much time to DJ.

Until about two years ago, out of about three offers a day, we would choose two gigs a month to do and loved every minute of it.

Currently I now DJ once a month at smaller, cooler clubs, but our aspirations are to be known as producers not DJ’s.

DP- When you do have a DJing gig, are there 2 or 3 records/tracks that you take with you as ready favorites to be played if and when the time is right?

DP- What has been the highlight DJing moment of your career?

DP- From a remixer/producer point of view what has been the career highlight moment?

JP & MG- If not THE highlight, being nominated for a Grammy certainly has to be in the top 2 or 3.

DP- Did you go to the Grammy Awards a few weeks ago and if so what was that experience like?

JP & MG- We did attend the Grammy's. There was a pre-telecast ceremony a few hours before the main show when they awarded the non-televised categories, which included our Best Remixer category.

It was a long and surreal day; one we will never forget.

DP- Is it true when they say that the real honor is in just being nominated or were you at all disappointed not to win (losing out to the remix of No Doubt’s “It’s My Life)?

You could have gone up there and given one of those tearful speeches thanking one and all.

JP & MG- We were quite happy with just being nominated.

To be honest we thought Basement Jaxx or Jacques Lu Cont were going to win.

We didn’t even bother preparing a speech so it was just as well we didn’t win as a couple of the winners of other categories froze up on there stage and some even started to break down.

DP- Any particular artist(s) on your wish list to do production work or a remix project for and why do you want to work with them?

MG- I would love to work with artists like George Benson, or writers I grew up admiring – like Eric Matthew and Daryl Payne. They wrote some great cool dance records for labels such as Prelude.

DP- Winter Music Conference in Miami is just around the corner. Will you guys be getting some sun and having fun on South Beach and more importantly do you have any new work that you’ll be debuting down there?

JP & MG- We probably won’t be going to WMC this year.

We only go every couple of years. Our manager will probably be there promoting our new Full Intention material and getting every one hyped up for the release of our 10th Anniversary album which is coming out later in the Summer.

We have a single – “I Believe In You” - that will be released to promote the album.

DP- Has the advent and growing popularity of internet sites such as Traxsource and Beatport (as well as iTunes and Real Music’s Rhapsody) been monetarily beneficial to you guys and other dance music artists and producers, or is there still a significant problem being caused by file-sharing sites?

MG- File sharing is still a big issue as many artists have noticed a drop in sales due to this. One way around this is to put your catalogue on as many legal downloading sites as possible.

JP- Paying $1 for a track seems pretty reasonable to me.

DP- Defected Records recently released a version of Soul Central’s remake of the classic “Strings of Life” with newly penned lyrics and a vocal performance by Kathy Brown. Some purists have cried “foul” and declared this an act of electronica high treason while others see this as an innovative method to introduce this incredible piece of Detroit techno sound to a broader dance music audience. On what side of the argument do you fall on?

JP & MG- It’s always difficult when a classic record is re-done. We liked the instrumental version but to be honest we were not feeling the vocal.

That's only a personal view and the record did pretty well in the UK reaching number 6 in the national charts.