As long as you make music that you genuinely feel special about, then it doesn’t matter what the outcome is. 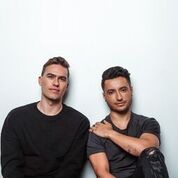 Loud Luxury is a Canadian DJ duo made up of Andrew Fedyk and Joe Depace. The two are currently based in Los Angeles where they make music together.

Their song “Body” was released through Armin van Buuren’s record label Armada Music. Featuring singer Brando, the song has landed them in the top 10 in Australia, Germany and New Zealand and won the Juno Award for Dance Recording of the Year.

New music was released this year with “I’m Not Alright” with Bryce Vine and they stopped at Lollapalooza in Chicago to talk about it.

JN: (Jerry Nunn) How did your set go?

AF: (Andrew Fedyk) I am drenched in sweat right now.

JD: (Joe Depace) This makes me really happy because we had played the Argentinean Lollapalooza. I thought that was crazy, but this was crazier. The fans were going insane the entire time.

JN: You are originally from Canada?

AF: Toronto. We head back there tomorrow to play a festival.

JN: I went to WorldPride there.

JD: It is always lit during Pride week. My buddy lives in the heart of it, so I would always stay at his place. It’s such a party with so much going on that week in Toronto.

JN: How did you meet vocalist Brando?

AF: We met him in LA after we moved to Los Angeles. We were in college and didn’t have money. We were hustling in the scene. We were at an open mic night at a bar down the street from our house. He was the opener that night. We liked his vibe. He’s originally a hip hop guy, so had never done dance music before he got in the studio.

JN: Is that the way to collaborate and think outside the box?

JD: That is usually what we look for. We want someone that will bring something to the table that maybe we wouldn’t think of or out of our comfort zone. I will hear something and think how different it is. That always peaks my interest and will make me want to work with them.

AF: We are always trying to push the envelope. If we hear a voice that we haven’t heard on a dance record before that makes it interesting.

JN: Was it crazy when “Body” blew up as a single?

AF: We were just DJs with a couple of shows a month. It was all of a sudden and we had to adapt really quickly.

JD: It doesn’t happen to a lot of people.

AF: We are very lucky.

JN: Would you like to work with Brando again?

AF: We are. He is helping us write some new stuff recently and have a new song with him on the way that we are really excited about.

JN: Do you feel pressured to have another big hit?

JN: How was working with Bryce Vine?

JD: He was awesome to work with. We met through a mutual friend in LA. We only heard a little bit of his voice and a guitar sample. We loved it!

We started writing the verses. Andrew and I would get in a studio wherever we were because we were on tour at the time. A good portion of it was done over the Internet. Part of it was written in Chicago here.

AF: We didn’t want something else that sounded like “Body.” We wanted something that was more country, folky and timeless. It is awesome to see the reaction when we play it.

JN: What is the song “I’m Not Alright” about?

AF: It’s embracing the fact that we all have our flaws. Everyone is a little messed up, one way or another. It is about accepting that and being at peace with that. There is no shame about that.

AF: There is an empowering message in that. It is okay to say that we mess up. That’s life.

JN: Who are you working with next?

AF: No one we can talk about. Things are still in an early stage. We have plenty of music coming up.

JD: We were just in Europe for Tomorrowland. We played some music that we had been working on. We can’t really name anybody yet. We have about five songs that we are really excited about. We just finished them up when we were in Europe.

AF: All the songs coming up are awesome too because they are DIY. We worked with a couple of close homies on it. It is not about big names or features. It’s about how good the song is. That’s all that matters.

JN: Is there someone you want to work with, but haven’t?

JD: There are so many. I would like to work with Drake, Ed Sheeran, Justin Bieber, The Weeknd and Dua Lipa.

JD: We got do to the remixes of “Scared to Be Lonely.” When we got the vocals for it I knew it was sick.

JN: I had interviewed her a long time ago then I met her after she got to be famous. She remembered me and described my look as distinctive. I wonder if she was being shady?

AF: No, it just means that you stand out. If Dua Lipa remembers you then you are definitely doing something right.

JN: What do you do for visuals during a Loud Luxury live show?

JD: Honestly, I have been going over that in the last month. We have a new fall tour that we are going on with about 60 dates in three months. We are playing all of North America.

The visuals are something we are very involved in. It’s an extension of us.

JN: What a movie or television show that you are into?

JD: I was just watching Chernobyl. That was crazy. It was heavy, but really well done.

AF: For show visuals, it goes back to a lot of cartoons like SpongeBob.

JD: We keep it funny and light. Our shows aren’t too serious.

AF: We want people to feel like kids again. We want them to have fun and have no worries. Watching Nickelodeon reminds me of that.

JN: Where did the name Loud Luxury come from?

AF: In high school, I was working with rappers and making hip hop records. I worked with a group that had a song called “Loud Luxury.” They were bragging about cars that they didn’t actually have. I thought it was a really cool name. I put it in my notes.

Fast forward a few years later and we needed a name.

JD: Andrew and I came together on it. We wanted something for social media and knew we had one shot. We weren’t going to make a name and then find out a year later we couldn’t have the Twitter name or something like that.

One day, we each made a list of names. That was the first one I chose. I knew it was the one.

AF: It really represents us very well. The rest is history. The name has not changed at all since we have worked together. That was ages ago.

JN: I meant to ask you, how did you two meet?

Afterwards, we started talking. He told me he was a producer. That week we got in the studio. From there, we started making music.

AF: We just hit it off and had good, creative energy together. We have been working together ever since.

JN: When was this?

AF: It has been eight years ago. That is crazy!

JN: What advice would you give a DJ?

JD: Yeah, if you stop then that’s the end of your career. We come from nothing. I had a job where I was making some money, but I had to pay off student debt. I just quit and moved to LA. We kept going, even when people told us that we sucked. We just moved on to the next.

AF: The only thing that will kill your dream and your career is when you stop. No rejection or bad set is big enough to stop you. It is really just you.