I want people to know that I’m always going to be honest to myself. 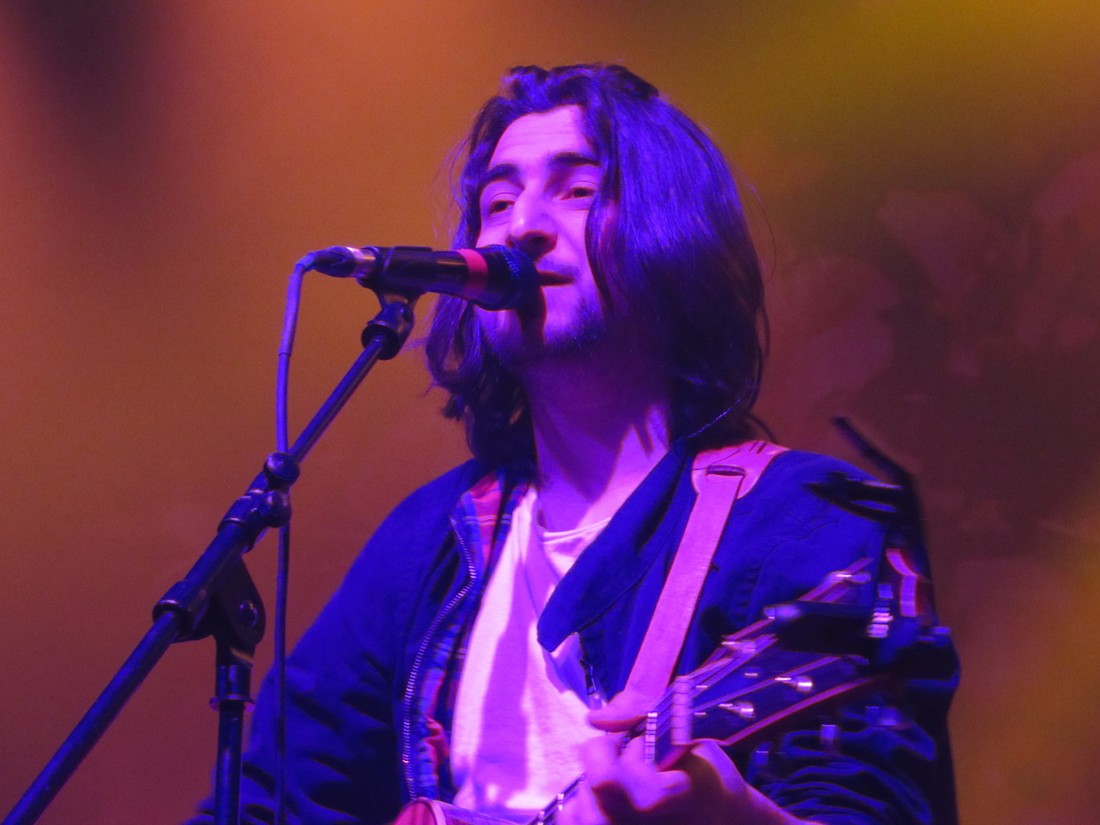 Singer Noah Kahan’s debut EP Hurt Somebody was released this year with a break out title track featuring Julia Michaels. The album was produced by Lorde and Khalid’s producer Joel Little.

Hailing from a small-town, Kahan has been writing songs since childhood. He left the farm life behind to tour with acts such as out singer LP, The Strumbella’s, Milky Chance, and Ben Folds.

Kahan joined singer George Ezra on a recent tour that landed him in Chicago and spoke about his career backstage.

JN: (Jerry Nunn) You are originally from Vermont?

NK: (Noah Kahan) Yes, I grew up in a town called Stratford, Vermont. There were about a 1,000 people so a small town. I went to school in New Hampshire and lived on the border.

JN: Vermont was the first state to pass gay marriage.

NK: Vermont is very progressive. New Hampshire can be a little conservative.

NK: Always. I was not good at anything else so figured I would just do it!

JN: You were making music in high school?

NK: I started music when I was really young, but I got a record deal when I was 17.

i was a senior in high school. At that point I was writing and trying to balance school.

JN: How would you describe yourself as an artist for people that heard you before?

NK: I am somewhere between alternative and folk music. It is acoustic guitar oriented, but there are definitely some alternative instruments used. There are some electronics elements to my music as well.

I think this is music for people that are trying to find their place somewhere. It is self exploratory. It has themes of doubt, failure, and discovery. It is set for young people, but also for anyone trying to figure something out should listen to it and relate.

JN: Who was an artist you wanted to be like?

NK: There are a few, but there is one. I grew up listening to Paul Simon and Cat Stevens that led me into artists like Counting Crows, Hosier, and Mumford & Sons.

If there is one I would say Ben Howard. I am obsessed with the way he writes. It is in that singer with a guitar world. It made me want to get into it.

JN: Talk about your EP.

NK: It is five songs and the lead single is “Hurt Somebody.” We had released that earlier but now it has Julia Michael sining on it so it gives it more of a platform for people the hear it.

That song is great, but I am really attached to the rest of the music. Songs like “Catastrophize,” “ Passenge,” and “Please” I wrote when I was already in the industry and in this crazy whirlwind. Those songs really grounded me. I like how they turned out and how people have connected with them.

JN: How was it working with Julia?

NK: I never got to meet her except in Napa and that was before anything happened. She just cut the vocal. She reached out and I was obviously thrilled. She’s an amazing singer and songwriter. We don’t know each other at all, but have shared this really cool thing together.

JN: How did you get on the George Ezra tour?

NK: My agency petitioned really hard for me and it is a huge tour. He’s such a nice guy. Have you met him before?

JN: Yes, I interviewed him in the past.

NK: Then you know he’s a great guy. I got the call from my manager and I was super excited. It has been amazing so far.

JN: James Bay just told me that he, Sam Smith and George Ezra were all an opening act together in the past. They all just blew up!

NK: That music all came out at once, which is good for someone like me. You can have a guitar and your voice and people will listen to you. It is not just a dude taking out a guitar at a frat party. They made it cooler. Before Ed Sheeran, you would never have heard a “Budapest” on the radio.

JN: For the video of “Hurt Somebody” you are laying on the ground a lot. Was that your idea?

NK: I thought it would be funny to be laying on the street get hurt for a song with that title. I originally wanted it to be me taking a girl on a date where she gets hurt and falls up the stairs, but that was going a little dark and abusive. It was suggested that I was the one being hurt.

It came out really well and the director was really solid in his vision.

JN: How was working with Lorde’s producer?

NK: Joel Little is an incredible guy. It was a real honor to be in the same room as him and make a watermark on my music. He is very good at figuring out what needs to happen for an individual project. I brought him these songs that were bare bones and he brought a life to them that I didn’t think could happen. Everything he touches is fantastic. I can’t say enough good things about him. He is one of the top three producers in the world for me.

JN: I have talked to artists that have worked with him before and he brings out the person behind the music.

NK: Absolutely. He just lets you sit there and doesn’t put pressure on you or stress you out. He gives you ideas and plays around.

JN: How is your setlist curated?

NK: There are about five songs tonight but on a headline tour it is about eight plus two more new ones. Sometimes we will throw a cover song in. We haven’t done a headline show yet so we are waiting to flesh that all out.

Tonight we are doing 30 minutes and the ones with the most energy and Ed Sheeran-y vocal moments I can sneak in there! [laughs]

JN: What cover songs do you like to perform?

NK: I do a Ray LaMontagne cover, which is pretty straightforward. I also do James Bay. I like to put spins on different songs like “Bitch Don’t Kill My Vibe” by Kendrick Lamar something from Kid Cudi.

I think covers can be really boring, but it is cool to do a song that people don’t expect.

JN: With the crowd outside I imagine it would be hard to tell what song to do.

NK: I would have no idea. I’m glad I am doing my songs. Either you like it or you don’t!

JN: Have you been to Chicago much before?

NK: Four times. I played Thalia Hall and was here once with LP.

JN: At Lincoln Hall. I was there and interviewed her for that show.

NK: We had an amazing tour and she became a close friend.

NK: When we finish this tour, we go to Europe to headline, then to Australia to headline. We do the Firefly Festival in Dover, Delaware. We have some time off, then go to Sweden in August.

I am releasing a record in the fall so I am sure there will be more touring. If it sucks I might go work an office job or something like that [laughs]!