Cazwell promises to be fresh for Chicago Pride Fest 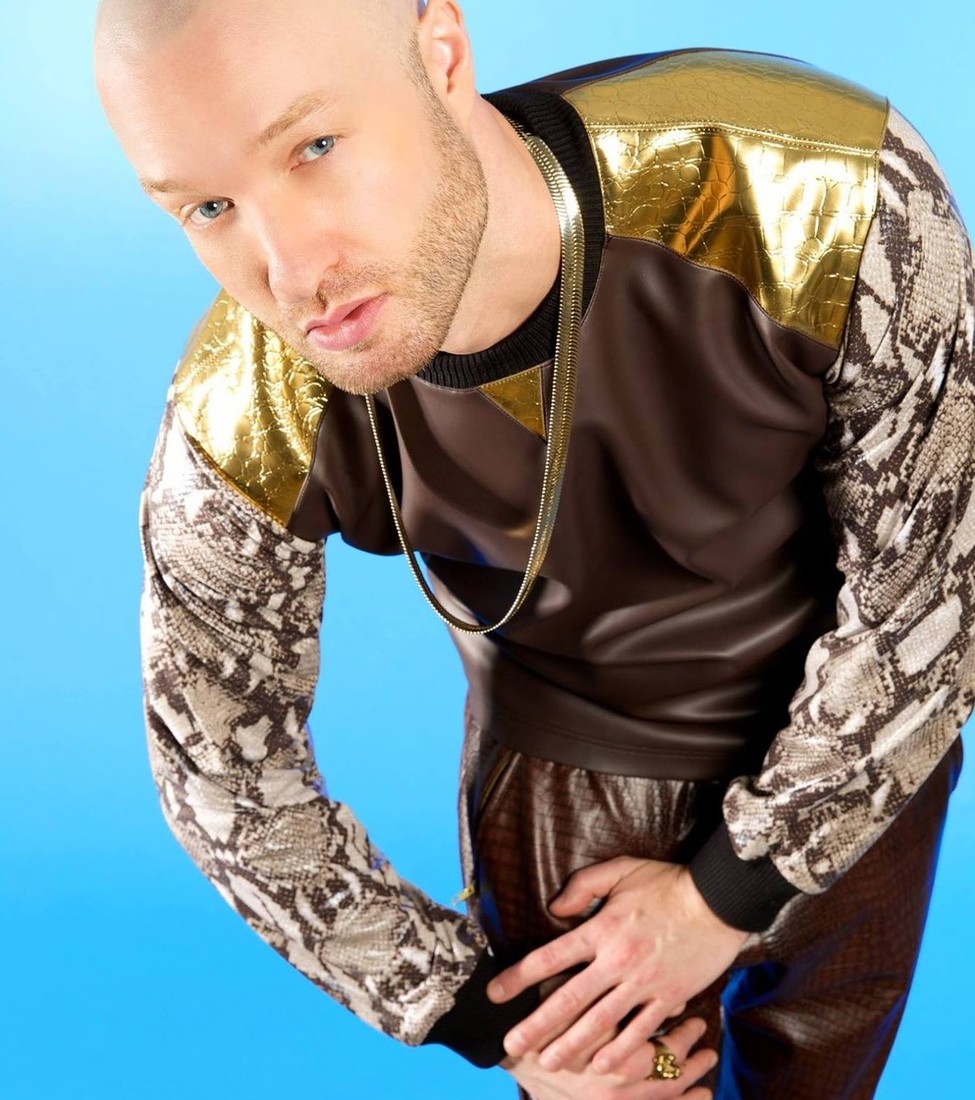 Perhaps the first gay white rapper and break dancer to gain a national following, Cazwell is a born entertainer. With a surprisingly sophisticated sense of humor and apparently not a single shirt in his wardrobe, Cazwell wryly parodies New York club culture with sizzling energy, dazzling moves and lots of eye candy. His outrageous and sexy music videos, usually featuring barely-clad dancers from the New York club scene, have a tendency to go viral. “Ice Cream Truck,” with such quintessential Cazwell lyrics as, “I’ll show you my drumstick / It will make your eyes gleam,” has scored 3.7 million hits since it debuted three years ago. Other hits include “I Seen Beyoncé at Burger King,” “All Over Your Face,” “Rice and Beans” and “No Selfie Control.” I spoke with Cazwell, who recently launched the Ice Cream Truck underwear line (icecreamtruck.bigcartel.com), about his career and more in May 2015.

Gregg Shapiro: Cazwell, before we talk about anything else, I have to ask you if you know if Beyoncé has ever heard “I Seen Beyoncé at Burger King” — and if so, what she thought of it?

Cazwell: Yes. I heard that she saw the video (and) she thought it was funny. That’s all I heard. I don’t know if it’s true. I heard it from someone who works with her people. I assume she likes it because she has a sense of humor about herself.

GS: You have a long history of collaboration, from your early days as one half of Morplay, extending to the present day and your collaborations with Peaches, Manila Luzon and others. What makes you so good at playing well with others?

C: First of all, thank you for being a journalist who does his research. I appreciate that [laughs]. I enjoy working with other people and I enjoy writing for other people. It’s a lot easier to write for others than it is for myself because I’m less afraid of what the judgment will be.

GS: Manila Luzon is featured on your song “Helen Keller.” What was the inspiration for that song?

C: Manila Luzon had texted me. I really enjoy her. I think she’s great and a natural star. That’s why I wanted to work with her. The inspiration for that song was a break-up I went through a year and a half ago. There are a couple of songs on Hard 2 B Fresh that revolve around that break-up. I took some time to do some lyrical therapy. It was really difficult for me. One thing that happens in a break-up, especially if you are with a person for five and a half years, as I was, you still have to go out and see them. Helen Kellering came from when you see the person, you (utilize) tunnel vision. They’re at the club, but you don’t hear them, you don’t see them. They’re excommunicated. I’ve always heard the queens in the club say, “I don’t see her.” That usually means they don’t care for their look or what they’re wearing. I changed it around a little bit.

GS: “Guess What,” your collaboration with Luciana, charted well on Billboard’s Dance Chart. How do you feel when you walk into a club and hear one of your songs being spun by a DJ?

C: The first thing I think is, “Do they really like it? Or are they just playing it because they know I’m here [laughs]?” Either way, I’m happy that the whole room is hearing it. It feels good. It feels like I get a lot of respect in gay clubs and gay club culture. I’ve been doing this an awfully long time.

GS: How much time do you spend at the gym to maintain that physique you like to show off in your music vids?

C: It depends on if I’m going to be making a music video or not [laughs]. Because if I’m not making a music video, I like to slack off. I’ll tell you right now, I’m not a natural at the gym. But I do enjoy it more lately, because I’ve been boxing. I like having an activity to do. I like classes. I like learning something while I’m doing it and I like being in a class with other people. I’m really proud of myself that I keep up in the class. I would say I work out five or six days a week, sometime twice a day. But that is because I’m getting ready to shoot as many videos as I can. Summertime is coming, obviously, and I have a lot of Pride shows coming up where I’m going to be outside in 95-degree weather with my shirt off. If I come to your hometown and I take off my shirt and have muffin-tops hanging over my waist, you’re not going to hire me to come back. You’re just going to walk away saying, “Cazwell’s been hanging out by the ice cream truck. Cazwell’s been to Burger King with Beyoncé.” People are going to say that. I know it’s going to happen.

GS: You recently launched your Ice Cream Truck underwear line. Is testing the fit of the underwear on the models part of your job description?

C: Oh, you’re nasty [laughs]. Ice Cream Truck underwear fits perfectly on everyone. There’s no need to test it. Yes, I make sure that it fits really, really well. All the “models” are my friends. I know all of them. We work together or they’re in the scene or they live in my neighborhood or they’re friends of friends. However, I am going to start scouting models and utilize other people’s experience more. We have a couple of new flavors of it coming out. We’re pushing it again for summer. I am going to start using people I like or follow on Instagram to see if they want to model the underwear. But all these guys are my friends. The last thing I want to do is go beyond that line of friendship.

GS: Would you say that creating an underwear line was a natural career progression for you?

C: Yes. I’m hyper-aware of fashion. I follow fashion. I wouldn’t call the underwear high fashion or anything too deep like that. But it was definitely a natural progression because Geoffrey Mac – he’s designed clothes with Sharon Needles, they did a sportswear line with cocaine bags and a tank top with serial killers’ faces all over it and burnt cigarettes. They wanted to do something with me, dip into my music. We’re both New Yorkers and we wanted to do a sportswear line – basketball shorts with a tank top or something with a lot of Chihuahuas. I said, “Why don’t we focus on one thing?” That’s my motto. Keep it simple and see how it goes. I always wanted to do an underwear line but I didn’t really know how. At first I wanted to call it Macazwell and have my name on it or something like that. After doing some investigation and figuring out what my demographic would like, I figured that I should call it Ice Cream Truck (after the song) because I’m more associated with that. Calling it Ice Cream Truck also gave it the opportunity to have a theme.

C: Sure is! Thanks for noticing.

GS: What else can you tell me about that video?

C: I’ll tell you the story of that video. I really wanted a video for the song. I’m working on a video for “The Biscuit” right now. In the meantime, I wanted to do another video to hold everybody over. I don’t like three months to go by without a video. I have an intern and he goes to Pratt. I said, “Look, I want to make a video. I want to make it in my apartment. I don’t want it to be expensive.” He got a friend of his who had just started film school. The cool thing is that we actually shot it in chronological order. The theme of the video was pre-pre-game, then pre-game, then the party. That’s how we shot it. I feel like everybody was getting progressively fucked-up as we shot [laughs]. The video was inspired by pictures we pulled down from gay Tumblr and art gay shit and A Clockwork Orange, things like that that we wanted to recreate and have a party scene. My goal with any video is to have it represent the song as best as possible. The song is really ratchet so I needed a ratchet video [laughs]. That’s what it comes down to.

GS: On a sad note, Nicky Da B, who can be heard on the track “Don’t Get It Twisted,” passed away last September. Is there anything you want to say about Nicky?

C: He was super-friendly, super-talented, smiled all the time. He was really quick. The take he did? He only did one take and he killed it. No stops. He just did the whole thing through. I was really impressed. His death came as a shock. I just feel honored that I was able to get him on my album and on a song that I really like. It’s a good feeling to have a piece of him on something that I’m on, too. No one can take that away from me.

GS: A big fuss is made every time a rapper comes out of the closet. As a rapper who was never in the closet, what advice would you give to those newly out?

C: Just don’t stop. Life is like a highway and the road will eventually bring you somewhere.  Don’t stop the car. Keep going, no matter what. Can I just tell you the number one piece of advice? Don’t be afraid to suck. Because everybody sucks. There’s no one that looks back 10 years ago and says, “That song was genius!”

GS: You have performed at the Fruit Fest in Madison. Last year you played Milwaukee PrideFest and this year you are playing Pridefest in Chicago. Do you feel like you have a special connection with Midwestern audiences?

C: Sometimes you do shows and it’s like, “Who’s playing? Oh, let’s go see him.” Or sometimes they just know that one song. But I feel like the times I’ve played in Chicago that people genuinely like me [laughs]. I always get the feeling that they like me personally. I don’t really know how to explain. Maybe it’s because people in the Midwest keep it simple, that there’s a relatability there.

GS: Do you think it’s because they’re less jaded?

GS: What do you have in store for your fans attending Chicago Pridefest?

C: I’m going to be doing a lot of newer songs. I’m going to be doing some songs that I’m going to be pushing as singles over the next three or four months and some that are newer. I’ve never before performed “The Biscuit” live. I’ve never done “Dance Like You’ve Got Good Credit” for them. I’ll be able to do “Downtown” and “Hot Homo.” I’m going to do a really sickening job. I’m excited to get back into the swing of performing all these Pride shows and to connect with the audience and sing some new songs.