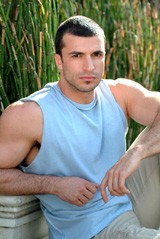 When I listen to a DJ talk about their craft, their influences, and the music that they like, I take mental notes and begin to form my impressions – good and bad – about them as a DJ.

My initial impressions of DJ Kio Kio, based on our recent interview conversation, were overwhelmingly good as I instantly became impressed with what he had to say.

His abilities in the DJ booth have led to him being one of the hottest up and coming DJs around and the recognition by Out.

I chatted recently with Kio Kio (his real name is Carlo Chiocchio) in anticipation of his upcoming appearance in Chicago for this ChicagoPride.com exclusive interview.

CP: How did you initially get interested in DJing?

Kio: When I first started going out during my university years in Toronto and then when I moved to Miami, I just loved to get out there on the dance floor and dance the night away.

Then one night down on South Beach, a good friend of mine who was DJing pulled me off of the floor and showed me what he was doing in the DJ booth.

Gradually from that night back in 1997, I started spending more and more time in the DJ booth.

I started spinning at parties and clubs down in South Florida and ultimately ended up being a resident at the famous South Beach after-hours club Pump.

CP: In the late 1990s and the first few years of the new millenium, Miami had an incredibly vibrant and creative DJ community.

Amongst all the big DJ names that either called South Florida home during these years or played down there regularly, who had the biggest influence on you?

All three of them have such distinctive styles that permeates what they do in the DJ booth as well as their productions and remixes.

If Tengalia was spinning and yet you walked into the club not knowing he was in the DJ booth, you could soon enough recognize him as its occupant based on his unique brilliance.

Other well known former Miami DJs Eddie X and Adien Aggenbach have also recently moved out to the left coast.

Is this just coincidence or are other factors at play?

Kio: The gay club scene in Miami, and on South Beach in particular, has changed significantly in recent years with fewer opportunities for circuit-styled DJs to spin.

The club and party scene on the West Coast provides many more opportunities and it’s also much more varied.

Back on South Beach I was mostly known for, and somewhat pigeon-holed as, an after-hours DJ due to the style I cultivated at Pump.

Out here on the West Coast I’ve had much greater exposure to all different types of parties and venues, everything from t-dances to late night events.

CP: How would you describe your DJing style?

Yeah, I play tribal, but I’m not limited to it at all.

You never know when I might throw in a funky mutant disco house cut in the mix.

CP: Are you a vinyl or CD jock?

Kio: I’m old school and still play about 95% of my sets with vinyl.

I just love the feel of a vinyl record on my fingertips.

Lugging all these heavy records around when I travel is not a lot of fun, but it’s worth it to me.

Besides I go to the gym and lift, so I can handle it.

CP: Do you have any current residencies or are you doing mostly events and guest appearances?

Kio: I don’t have any residencies and have mostly been doing events, private parties, and guest appearances at clubs this past year.

Interestingly, out here in Los Angeles I find that the promoters have chosen not to have resident DJs for their events or nights.

They put effort toward marketing and branding the party and not as much of an emphasis on the DJ.

CP: What about remixing and production? Do you have any aspirations in this area?

Kio: I’ve been really concentrating this past year on my DJing and gigs.

However, remixing and the production end of the business are definitely going to be a part of my future.

CP: Name your 3 most favorite dance music tracks of all-time?

The first is “Burning” by MK.

And I have just about every mix and remix that’s been done of that one.

CP: What has been the highlight DJing moment of your career?

It’s been a tremendous year with lots of new experiences and opportunities to play a bunch of gigs all over the world.

I even spun over in Singapore, which was incredible.

CP: What’s the one club and/or party that you’ve never spun at, but is #1 on your wish list?

Kio: I’d have to say spinning over in Europe on Ibiza is tops on my wish list.

At a club like Pacha with thousands of clubbers under my influence.

CP: The year is almost over, what has been the dance song of the year in your opinion?

Kio: I’d have to say the Peace Division remix of “This Beat Is” by Superchumbo is my favorite of the year.