music changes as fast as a gay man changes his outfit before going out on a Friday night... 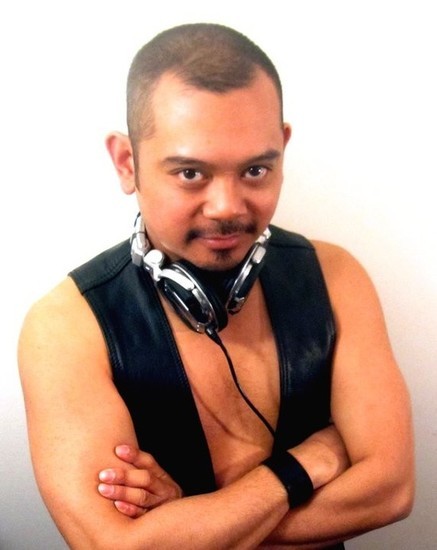 Last year, we caught up with Chicago-based DJ Ron Geronimo to talk about spinning the opening set for International Mr. Leather Weekend's Black and Blue Ball.

GoPride took a moment to follow up with DJ Ron as he prepares to make his second appearance at IML weekend at the end of the month.

MI: Hi Ron, Here you are again ready to open at the mecca of leather here in Chicago! Let's start at the the beginning. What inspired you to become a DJ?

DJRG: Pauly D. inspired me to become a DJ. (laughs)

Naw... fo real, real... When I was eleven, I spent countless hours watching my big bro cut and scratch and I was a sponge soaking up everything he was doing. The rest is history. Funny thing is in the beginning, he told me I was FORBIDDEN to go near the DJ equipment when he wasn't home.

Did I listen? Nope. Whenever he was at school or out, I'd practice. He caught me one day and instead of scolding me, he told me to keep going couldn't believe what he was hearing: mixing that was on beat!

MI: Who has been a musical influence to you?

MI: What are the top 3 songs on DJ Ron G's current playlist?

DJRG: Sheena Easton's "Strut", Air Supply's "All Out of Love" and anything and everything by Herb Alpert & The Tijuana Brass.

MI: Name your Top 5 favorite dance songs of all time? And what makes them your favorites?

DJRG: Dang, too many to list. But off the top of my head:

BeeGee's - "Stayin' Alive": story is, before I could even talk, I was singin this song.

Miguel Brown - "So Many Men, So Little Time": HELLUR... my motto and theme song!

1st Choice - "Let No Man Put Asunder": THE PIONEER disco anthem track for women's (and hay men's'es'es) self worth and the struggles of holdin' onto that man.

Ralphi Rosario featuring Xavier Gold - "You Used to Hold Me": THE PIONEER house anthem track dealing with the hurt of missin' that man and holding on to a good thing.

MI: How has your sound evolved over the years?

DJRG: Well, thanks to the evolution of classic polka to this new style of tech house polka, I've been able to keep up with the times.

In all seriousness, obviously music changes as fast as a gay man changes his outfit before going out on a Friday night. As much as I keep current with today's sound - other than dubstep, which is just noise to me.

GAWD, I sound old by saying that cause I'm sure people my age said the same thing about the music I was listening to back in the late 80's and 90's), I still like to educate a crowd and throw in a oldie but goodie at times. In my humble opinion, house music has many influences so it represents the past, present and future sound. If it's a good track, it's timeless.

MI: Tell us a little bit about your equipment - what's your current live setup?

DJRG: Ummmm. That's kinda personal information and only the right guy will find out.

MI: Any words of wisdom for young DJ's starting out?

DJRG: Yes. Learn the history and basics of mixing/beat matching. And DON'T DON'T DON'T EVER USE THE SYNC BUTTON. It's just laziness... NOT FORWARD THINKING!

MI: What's weekly life like for you outside of the DJ booth?

DJRG: Hmmmm... good question. What is outside life like? I LIVE in the DJ booth.

MI: When all the partying is over how do you like to chill out?

DJRG: Tacos from a Taqueria and SLEEP.

MI: Where are your top 3 favorite hangouts in Chicago?

DJRG: Smartbar on Sundays for QUEEN. Gotta love Byrd and Sal-E for keeping House Music alive. Michael Serafini is sexy and his DJing just makes him even SEXIER! Grrrr!

MI: Speaking of which (laugh), the last time we checked in, you were single. Has that changed?

DJRG: Yes... I want to introduce you to my partner in crime and the love of my life... MY LEFT HAND.

MI: (Laughs) Ok, so what's next? Any other upcoming projects?

DJRG: A reality hit show soon to air called "Funny Lil Island Panda DJ" or FLIP'D for short which is about my life being, well, a funny lil island panda DJ. FYI, an asian bear in the bear community is considered a panda.

MI: Wow, thanks for the Panda express lesson today. And congratulations on Mulwaukee Pridefest! Anything else you want to share? Any shouts outs?

DJRG: Yes... My name is Ron and I'm a facebook "like"aholic. I love cats, dogs and long walks along the shore. LTR oriented here but NSA fun is welcomed.

Big nods to anyone who read this and made it all the way to the end!