We play gay bars, and we love it 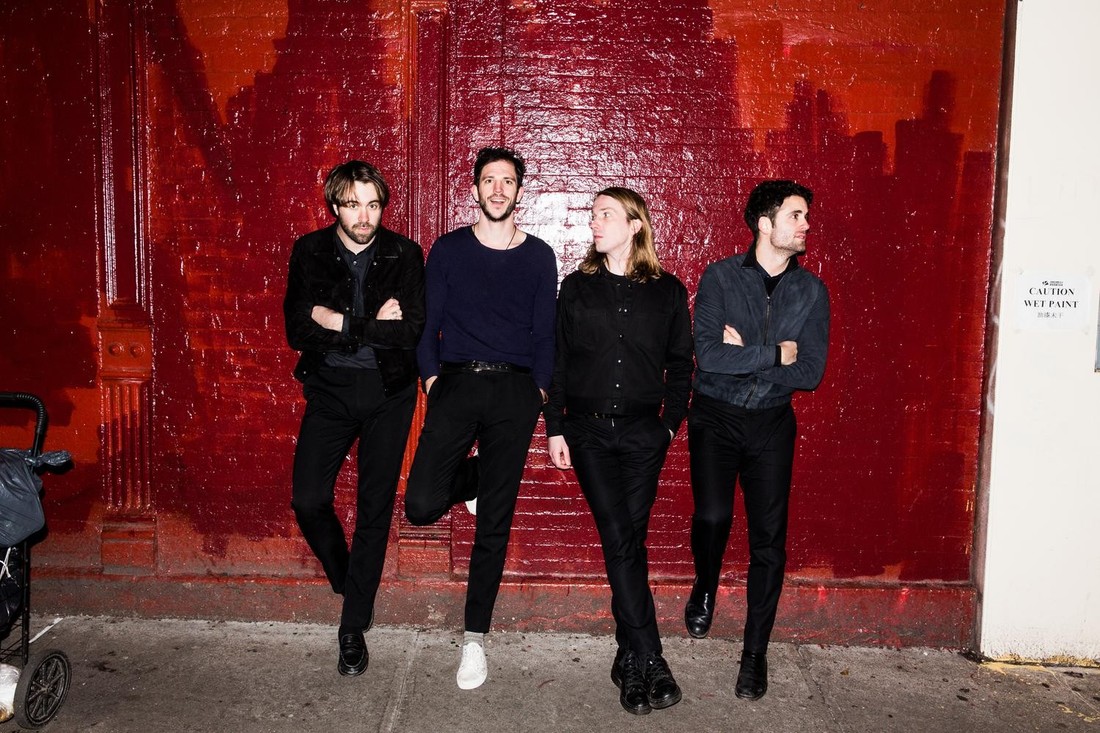 Led by lead singer Justin Hayward-Young The Vaccines have rode the English rock wave. In the UK they have charted at number one and they have opened for groups like The Rolling Stones, Arctic Monkeys, and Muse.

JN: (Jerry Nunn) Nice finally meeting you face to face after our past interview. Let’s talk about the new album English Graffiti. It seems like a new sound for the band.

PR: (Pete Robertson) I am glad that comes across. That was something we were trying to achieve. We spent a long time making it, which was the first time we have ever had that luxury really. When we made the first two albums we had the songs ready and we just wanted to get in a room to record.

After about three years on tour without really stopping we definitely needed to take a little time out. We needed time off of the road and away from the band just to collect ourselves. We had to take in what happened over the last few years because everything happened so fast.

One of the first things we did was conceptualize what we wanted to do next. The only thing we knew was we wanted to be a bit ambitious with our music and harness some of the sounds that we had grown to love over the last few years. We are big fans of pop music and always listen to the radio to hear what is happening. We felt we hadn’t really made that clear on our first two records. They sounded a little throw back with being two guitars, a bass, and drums. It wasn’t anything to do with being purists. It was an abandonment we felt when we first started the band. That led to that lineup and not over thinking it or overproducing it.

A lot of the music we were listening to was made in a totally different way. A lot of the music made on the radio these days is very produced. They write from the bottom up, a lot of it. Often it is an instrumental idea using samples and we wanted to experiment making music that way. With a lot of trial and error we ended up with English Graffiti. We are very happy with the record.

JN: It sounds very polished and more commercial than past efforts.

PR: We are definitely getting more ambitious in the studio. It ended up resulting in a more polished sound. We worked with David Fridmann and Cole M. Greif-Neill. Dave has a very recognizable sound and it is very big and lush. Cole’s thing is quite minimal. They actually achieved different things on opposite ends of the spectrum. Using the two of them really helped us with that and was inspiring.

JN: The band made a love song for the first time.

PR: (laughs) They are all love songs in their own way!

JN: Maybe rocking love songs but this one was slow. Was that a challenge to make?

PR: It was actually one of the first songs that Justin wrote. He was writing from the second we got off the road last time. We all agreed that “(All Afternoon) In Love” was a really good song. We try to pick our best songs that are there not necessarily a love song. It was the first one we demoed and developed.

JN: Does the band have a lot of say in the treatments of the videos?

PR: It is a collaboration. We bounce ideas around to start for a concept that might reach over the whole campaign. I’m a big fan of a very recognizable aesthetic. I love looking at bands over the years and seeing their different periods. We thought it would be cool to start an aesthetic through the artwork and the videos. The videos are a nod to classic B movie themes.

JN: I saw aliens in one of them.

PR: Yes, obviously it is going to have a Sci-Fi and kung fu thing. We raised this idea with a few directors and they came up with the idea to make it all in the same world.

JN: How were the stunts?

PR: That was the most fun bit. We had a proper stunt coordinator. The stunt guy did some incredible falls to make it look like we were really nailing him.

JN: Is your style with matching white outfits become part of the act?

PR: I think we are getting a little better at it. It has always been part of the band’s influence. Freddie is very much into clothes. I think he has his own label started. It is hard to find stuff that we all look good in. We all have very strong opinions about that.

JN: After seeing the band in concert a few times I see that Justin encourages fans to get wild. Any stories about that?

JN: Doesn’t he get girls to show their boobs?

PR: Oh yeah, that is a regular thing. We had a guy crowd surfing in a wheel chair at one of our shows. It was insane and so cool.

JN: So the crowd picked up the wheelchair?

PR: Yes, it started with his friends then he was going across the whole room. It was amazing and really great.

PR: It was good but hot I remember. We played it twice now. The first time we literally stepped off a plane from Australia about midnight the night before and were playing midday so we were completely ruined. We had no idea what time it was or what was going on. That was a bit of a blur.

The second time we had been in the States for a while so I felt we were completely in charge of that one. We had a great crowd and a really good show.

JN: Is a live album coming out?

PR: Yes, we have one already in the UK but not sure if it is out here yet. That was recorded in Kingston. It was at a club there that is really supportive of the band. We decided to record it.

JN: Who is your favorite to open for on their tours The Rolling Stones, Red Hot Chili Peppers or Arcade Fire?

PR: They are all good for different reasons. The Stones are one for the scrapbook. It was a once in a lifetime experience. We were the main support for them so that was amazing.

JN: Did you get to hang out with them?

PR: Hanging out would be a stretch since they are notoriously reclusive. They don’t want to be involved too much with other people for obvious reasons. They are historically such a big band and I am sure they have been there and done that a lot. They sent in their PA to offer us a picture with them and let us into their little compound. That was a big moment and we were all really nervous. They came in and we all had a laugh.

JN: How does the band feel about gay rights?

PR: We are quite progressive. Passing gay marriage was a huge story and victory. We all felt that was an amazing step forward. We play gay bars and play gay night and we love it. We have gay friends and are all for it.

JN: What is next for the band?

PR: We are taking a few weeks off in September to write some more. We decided that since we made the last album that way we would do it again. It is a new process for us and we have not reached the end of that line. Like I said we are all really proud of the album and the best thing we have ever done but there is room in the partnership to write more together. Justin and Cole are going to write more songs and will hopefully have some new music to record soon.