The Wind Beneath Bean's Wings

I look at C.C. Bloom and there is a lot of Barbra in her. 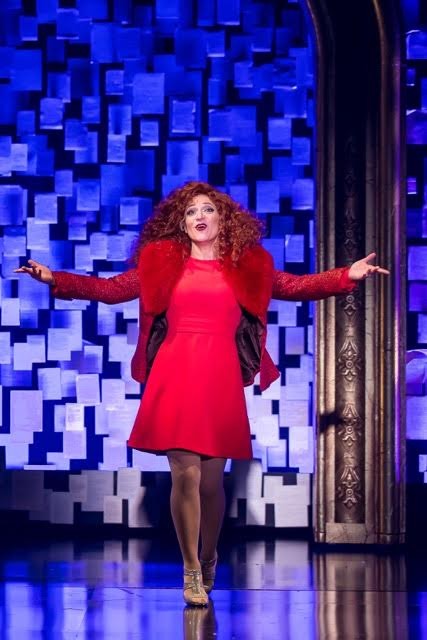 Raised in Portland, Oregon the multitalented Shoshana Bean hit the world of Broadway and never looked back. She was an original cast member of the musical Hairspray that won tony Awards. She took over the role of Elphaba in Wicked back in 2005 after Idina Menzel moved on.

She sang back up for Michael Jackson as well as released solo albums in the past. She tasted the rainbow while performing at LA's Pride celebration then excited the crowd in Las Vegas for Holly Madison's Peepshow.

Now she starts a new chapter of her career playing Cee Cee Bloom in a musical version of Beaches based on Iris Rainer Dart's novel. Nunn gave Bean a ring on the phone to learn more about it.

JN: (Jerry Nunn) I was reading up on your resume and it’s very impressive. You have done some work, girl!

SB: (Shoshana Bean) Thank you. I’m old what can I say? [laughs] I was in tech yesterday and I had someone look up “middle age.” Am I middle aged? I can’t handle it! Apparently I am not and the ages have shifted to older. I’m not quite there yet.

SB: You sound like you are twenty on the phone. You have a youthful energy.

JN: Well, I was old enough to see Beaches in the movie theater.

JN: I remember people bringing boxes of tissues to the cinema because Beaches was so sad. Do people need to bring their hankies to your show?

SB: Oh my god, yes. The cast has seen it multiple times in the run-throughs and they cry multiple times. I told the director we should get a sponsorships to hand out Kleenexes when people enter the room.

JN: You could do Beaches handkerchiefs.

SB: Exactly, one of the merch items could be a monogrammed Beaches hanky.

JN: Did you know Bette Midler is in concert here in Chicago tomorrow?

SB: I did not know that. I have a friend that plays trumpet for her. I have friends that have worked for her for a hundred years. I am sure this one will be just as spectacular. I feel like our cast should go. I am sad we will miss it.

JN: What can audiences expect from Beaches the Musical? How different is it from the movie version?

SB: It is totally different than the movie because it is based on the book, which is very different than the movie. I think that is the first thing people should know. When I announced I was doing the show on Twitter people were excited about the music from the movie. I told them that it is not even the same story or plot. I warn people not to expect the movie. That is not going to be a disappointment by any means. The music is original and beautiful. “Wind Beneath My Wings” is the one song that made it into the show. What everyone identified with the movie, the book, and now the musical is friendship. That is still there. Living a huge hunk of your life with someone to witness it and experience it is still there. It is the common thread with all. We have the heart and soul of Beaches.

JN: The movie has had a longevity to it. It’s all gays and girls still watching it.

SB: Yes! What more can anyone ask for?

JN: So that will be the audience at the show.

JN: You studied theater in school and always wanted to do this?

SB: Yeah, that is what my mom tells me anyways. I just wanted to sing. This was the likely path when that was the case.

SB: No, not at all. I just didn’t think about it being a future until it was time to choose college. I was going to go to University of Oregon and major in business. My mother asked me to try performing and at least give it a shot. My parents are way more creative than they allowed themselves to be because they were a different generation and time. My mom never pushed me though.

SB: I’m the worst at choosing one but my favorites are Funny Girl, Sunday in the Park with George, Into the Woods, Sweet Charity, and West Side Story.

JN: I heard you are a big Barbra Streisand fan.

SB: I was raised on her so growing up in a smaller town with not a lot of arts available, she was a familiar face. She was Jewish, different, funny, and obviously that voice was a big part of my upbringing and the artist that I continue to become. I look at my C.C. Bloom and there is a lot of Barbra in her. I get to play Funny Girl but on steroids!

JN: How was it being in the original cast of Hairspray?

SB: That was the best two years of my life. There were lessons I learned and things that I draw upon every day. I see the fingerprints of that show all over me. I hadn’t done a show in almost ten years so I still think back about it. I think about the kind of leader Harvey was.

JN: What led you to Beaches?

SB: I met Iris Rainer Dart, the writer, about five years ago. She had written another project called People in the Picture. I met this other woman because her mother lived in my apartment building. She recommended me to Iris because they just needed someone to read through the script while they were making changes. It was very casual. She had mentioned then that she had written Beaches the book and would be turning it into a musical. In my mind I knew it would be a dream role. I just woke up one day and got an email about me being in the role.

My summer was booked up but I was able to postpone some stuff. It just all came out of nowhere. It is one of those divine things. Sometimes I don’t know where Cee Cee ends and I begin.

JN: What are the plans for Beaches after the Drury Lane run?

SB: I’m not sure but the producer is dead set on getting it moved and making it happen. She is very committed. I think the plan is to get it to New York. That is why we are here chipping away at it, making it the best we possibly can.

JN: Are you making more of your music afterwards?

SB: Yes. This summer I want to write the rest of my fourth album. I hope to get in the studio this fall to finish it. That is my aggressive, ambitious plan!

Life's a beach as Beaches begins June 24 running through August 16 at 100 Drury Lane in OakBrook Terrace.

Visit drurylaneoakbrook.com/live-theatre/beaches/ or call 630-530-0111 for tickets.