Composer in the Mist: an interview with Jack Curtis Dubowsky

The world has changed, but there was a time when the people doing the most interesting stuff were in what you'd call high-risk groups. 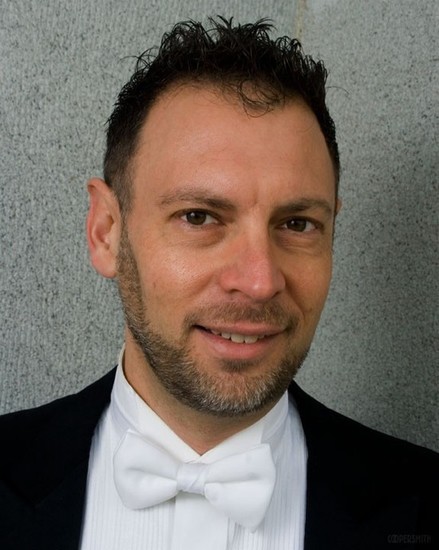 Even if you don't listen to contemporary classical or experimental music, you've probably heard something composed by acclaimed gay composer/musician Jack Curtis Dubowsky.

His film scoring and music editing work can be found in both mainstream and gay movies, from That Man: Peter Berlin to Toy Story 2. On January 22, Chicago Modern Orchestra Project presents the world premiere of Dubowsky's commissioned avant-garde piece Mist, at the Paul Robeson Theater at the South Shore Cultural Center, 7059 S. Shore Drive, in Chicago. I spoke with Dubowsky about his work and career in late 2013.

GS: (Gregg Shapiro) Chicago Modern Orchestra Project is presenting the world premiere your avant-garde composition Mist. How did this collaboration with CMOP come about?

JCD: (Jack Curtis Dubowsky) I had long wanted to work with Renée Baker and her Chicago Modern Orchestra Project.

I felt that she was a kindred spirit, artistically, in her journey through the new music world, and also in her DIY (do it yourself) ethos.

I knew through social media, namely Facebook, that she was programming some upcoming concerts and was looking for new work. Mist was one of several suggestions; it incorporates drones, structured improvisation, indeterminacy, and ambient moods.

GS: What can you tell me about your process when it comes to composing a commissioned piece such as Mist?

JCD: Mist was one of three suggestions; Renee was looking for a new piece that would incorporate drones, structured improvisation, indeterminacy, and ambient moods. So I suggested three titles, and we went with Mist. There's a lot of rising structures; the mist seems to be rising a lot in this piece. Another interesting feature is the presence of a motto based upon the vowels in Renée's name: E, E, E, B, A, C, E. This reinforces the use of E as a drone, which is also an open string on the basses. (An apology to the cognescenti: I'm interpreting "B" as B natural, instead of B flat, for reasons of sound; B natural is normally represented by the letter H.)

GS: What composers do you consider to be the greatest influences on your work?

JCD: I'm very interested in baroque music, early electronic music, structured improvisation, and mid-century modernism. Counterpoint is a huge fascination of mine. My approach is based more on counterpoint than harmony. I'm not sure who has influenced me generally. Many compositions are modeled after other pieces in one way or another, or you borrow techniques from other pieces. This can be a conscious thing; ideally you know precisely what you're doing. Not to get bogged down in these distinctions, but it's easier for me to discuss whom I admire. For baroque counterpoint, Henry Purcell. For process, especially in structured improvisation, John Cage, John Zorn, and David Slusser, whom I worked with at Pixar. For choral writing, Luigi Cherubini, Benjamin Britten. In popular song, Martin Gore and Billy Currie. I think Virgil Thomson is very under-appreciated. Some composers I admire for being so prolific, like Bach, Glass, or Morricone. For working in multiple genres, I admire composers like John Corigliano and Toru Takemitsu.

GS: Mist opens CMOP's program celebrating the life of Dr. Martin Luther King, Jr. What does that mean to you?

JCD: When I began writing the piece, I didn't know that the world premiere was to be on a concert celebrating Martin Luther King, Jr.! I feel honored to be included in this celebration, and I feel it's a fitting debut for me with this unique orchestra. I feel it's inappropriate for me to invent reasons how Mist is connected to King, but I do feel that my own musical work -- with the GALA choral movement, community orchestras, high school choruses, and even disenfranchised performance artists – connects me in spirit to the festivities in honor of one of the greatest activists for social justice and civil rights. And to me, that is a great honor.

GS: Harvey Milk: A Cantata is another of your recently commissioned pieces. Milk is one of the legendary figures of the modern LGBT community. How does being an out, gay man influence your work as a composer?

JCD: I would actually say that it doesn't. However, others would disagree. Nadine Hubbs has written extensively on the connection between sexuality and musical composition in her thoughtful book, The Queer Composition of America's Sound. So the jury is still out on the connection between sexuality and composition, at least in an artistic sense. As far as culture, sociology, and sensibility, however, there may be something there. Many composers achieved recognition because they represented their immediate community. Think of Ellington or Satie. You write for the people around you. It's difficult writing for people you have not gone to school with, people whom you don't really know and who don't know you. You write for people in your own circle. Hopefully that circle broadens, and you expand both your social identity and your own personal identity as well. But, your question brings up one of the great cultural debates of our time. And the beautiful thing about this discussion being brought about because of Harvey Milk: A Cantata, is that Harvey wanted to represent everybody. He was an organizer, a bridge between communities, and interested in civil rights for everyone. One of the lines from Milk we used talks about, "not only gays, but those who are Blacks, the Asians, the disabled, the seniors, the usses." So we're all influenced by the human experience.

We're all part of the "usses."

Milk was a legendary figure not only of the LGBT community, but of the whole civil rights movement. That's why we're now seeing university and high school choruses singing his words. It's really about civil rights and equality for everyone.

GS: How does being an out, gay man influence you as a performer?

JCD: Wow! I would say that I came from this weird world of avant-garde cabarets, theatre with cardboard sets, rock and roll, new wave, punk, the whole DIY aesthetic. The underground, which of course connects to the gutter, as Peter Berlin called it. The world has changed, but there was a time when the people doing the most interesting stuff were in what you'd call high-risk groups. The disenfranchised. There's a cultural connection between "low lifes and high lifes," as Marc Almond sang. It's that line that connects Basquiat to high society. As a performer, I tend to do things that interest me. The Jack Curtis Dubowsky Ensemble just is stuff that I wanted to do. And oddly enough, the audience for the Ensemble is primarily straight; people who enjoy weird music.

GS: Your soundtrack work has a vast range – from compositions for LGBT docs such as I Always Said Yes: The Many Lives of Wakefield Poole and That Man: Peter Berlin, to LGBT dramas and rom-coms such as Rock Haven and Under One Roof, respectively, to your editorial work on Pixar titles including Toy Story 2 and Monsters, Inc. What do you like best about film work?

JCD: The best thing about film work is the collaboration. It's the closest thing we've come to that resembles Wagner's ideal of the gesamtkunstwerk, the gathering of the arts. Music composition can be a little self-indulgent by itself. Music alone can wander; it can go and frolic off someplace. With cinema, the music must support the picture. The music has to know what's happening onscreen. The music's timing is subservient to the timing of the picture. You have to please the director. You have to follow the script. You are not there to undermine the film or do your own thing; you are there to figure out how you can support the director's vision, and to make the film work better. Also, to be blunt, there's still a little bit of money in film or television; because in film and television, the producers need to clear the rights to the music to get distribution. That's created a business environment where it's still possible for a composer to earn a paycheck. And, as you know, it's become increasingly difficult to survive in the arts doing anything. The other great thing about doing film scores is having the ability to hire great players.

GS: As a musician who works in various musical realms, including avant-garde, classical, jazz and film scoring, what kinds of music do you listen to for your own enjoyment?

JCD: Like anyone, I go through periods. Recently, I saw Einstein on the Beach at the LA Opera, and I'm going to try to go see Billy Budd. I am a huge vinyl collector, so I always have a stack of records I need to play. In heavy rotation lately has been the naivete of early Tuxedo Moon, and the spacey sounds of electronic composer Ruth White. Jazz lately, Keith Jarrett. Original pressings, naturally. There's also a small label called Minimal Wave out of New York, and they're reissuing rare early experimental synth from the 1979-1981 period, great stuff like Moderne and Polyphonic Size, and it's all limited edition. My home often seems like it's 1967, 1981, or the seventeenth century. The high points of the baroque.

GS: Now that Mist is having its premiere, have you started working on or thinking about your next composition project?

JCD: I'm working on a piano solo called "Moth" for Grammy-nominated pianist Keisuke Nakagoshi. That will be premiered February 8, 2014, 8 p.m., at the Logan High School Performing Arts Center in Union City, California, in a benefit for the Fremont Symphony Orchestra. I'm planning on doing a handful of these insect miniatures for solo piano. It's a bit like Bartok's Mikrokosmos. Clever but not too difficult.