Heart to Heartbeat: an interview with Laura Doherty

I’m out and proud and all that stuff. 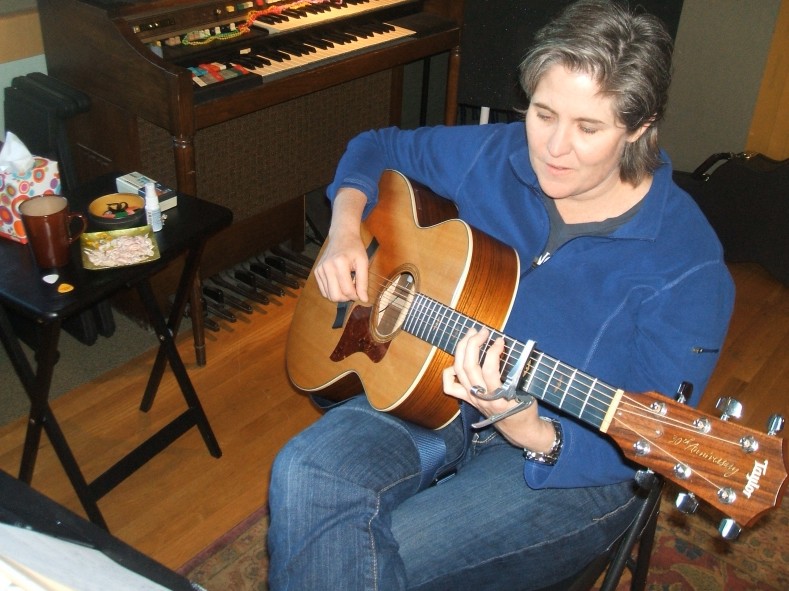 Children's music has evolved since you were a kid. From Sherry Lewis and Soupy Sales to Sesame Street and Zoom, from Raffi to Barney; it's a booming business. But if you've ever been trapped, I mean, riding in a car with kids strapped in to their car-seats with Barney the boring purple dinosaur "singing" his repetitive and mind-numbing tunes, you probably wished on a star for something better. Fortunately for people who became parents at the dawn of the new century, a new generation of children's music artists arrived to save the day.

Indie rock musicians such as Ralph Covert (of the Bad Examples), Dan Zanes (of the Del Fuegos) and Jason Ringenberg (of Jason and the Nashville Scorchers), parents themselves, began recording and releasing CDs for children that parents didn't mind listening to as well. Zanes released discs as Dan Zanes and Friends (and even scored a Grammy), Covert went by Ralph's World (not only earning a Grammy nomination but forming a partnership with Disney) and Ringenberg recorded as Farmer Jason.

"Acoustically rockin' your kid's world," out singer/songwriter Laura Doherty joins the ranks of these artists with three well-received albums of children's music, including her latest, In A Heartbeat (lauradohertymusic.com). Based in Chicago, the city that gave us children's entertainment legends such as Ella Jenkins and Kukla, Fran & Ollie, Doherty has been teaching and performing in the children's music world for 10 years. She took time out of her busy performing and teaching schedule to answer some questions about her career. [Laura Doherty performs on March 13 at the Thornton Library in Thornton and on March 19 at the Ela Area Library in Lake Zurich.]

GS: (Gregg Shapiro) Laura, as someone who has released

three albums of children's music, what kind of music did you listen to as a child?

LD: (Laura Doherty) As far as kids' music, I had that Free To Be…You and Me record by Marlo Thomas. That was a big one for me. Early on, I actually remember listening to The Chipmunks' record. My parents weren't really into folk or rock music at all. Not that they were too old. My dad listened to marching band songs from the Army. He just stayed in that era [laughs]. My mom likes whatever is mainstream. Some of the records my parents had when I was little were the Carpenters and Barry Manilow. I guess you would call that adult contemporary. I have an older brother and I listened to whatever he was listening to. I became a huge Billy Joel and Phil Collins fan in middle school. Then in high school I discovered the Beatles and all the classic ‘60s music. It was the 1980s, so it wasn't new music. The Grateful Dead, Neil Young, Crosby, Stills and Nash, all the stuff with great acoustic guitars and harmonies. Also all the great ‘80s music, R.E.M. and The Smiths. I've always loved music. I can't remember not loving singing and stuff like that.

GS: You started playing guitar at 16. At what point did you realize you wanted to do more than just play for friends or family; that you wanted to write music, perform publicly and teach?

LD: That all came about much later. Guitar was just a hobby for me up until I was about 28 [laughs]. I did it for fun. I guess I started writing songs in college a little bit. I would play them for friends. I went to the University of Dayton in Ohio. We had a little coffeehouse called Monk's Inn -- it was a Catholic school [laughs] -- that was my first gig. I realize that I enjoyed performing. I moved to Chicago in 1992 and my guitar sat in the corner for couple of years. I was trying to figure out what I was doing with my life. It wasn't until I discovered The Old Town School. Even though I was already a pretty good player, I started taking classes there, such as Advanced Guitar and vocal classes. Then I started volunteering there and I got immersed at The Old Town School. I really wanted to work there. It was a much smaller organization then. I was working for the magazine Where Chicago, a job I had just fallen in to. I was okay at writing but I wouldn't consider myself a writer [laughs]. I stuck around long enough and eventually The Old Town School hired me. I had a great piano teacher there, Kerry Sheehan, who happened to be the director of the kids' programs. She asked me if I had ever thought about teaching Wiggleworms, the toddler program. She's the one who saw something in me and gave me a chance. I got hired first to teach Wiggleworms and then shortly after that I was hired to teach in the adult guitar program. I've been there ever since.

GS: What inspired you to create your first children's album, 2009's Kids In the City?

LD: It was organic, a natural progression. I'd been teaching kids for 10 years at Old Town. I thought to myself, "Why don't I try to write some kids' songs?" I was writing adult songs. I was in a little folk duo called Sweet Hello. I did one solo record produced by Ralph Covert and then I did two records with Sweet Hello. We played some shows in the clubs around town. I didn't pursue it as a full-time career. I wrote some kids' songs and then I went into the studio to record Kids In the City. It got good reviews. At that point I thought, "Maybe I can be a full-time children's musician." It felt like a better route for me to do music full-time. There were so many avenues to go. You can go into educational music. I do a lot of teaching at preschools and I play a lot of libraries.

One of the nice surprises on your new disc In A Heartbeat is the presence of Glenn Kotche, a member of the band Wilco, playing drums on your song "Drum Kit." How did that come about?

LD: He actually was in my Wiggleworms class with his wife and his daughter Vivian, maybe four years ago. I didn't actually know who he was. He just looked like a rocker dude. I thought, "He looks like someone who plays rock ‘n roll." Later, someone told me, "That's Glenn from Wilco." He would come to my concerts with his kids. He was so sweet. He said, "Laura, you're all we listen to, kids music in the house." I thought it would be fun to ask him and maybe he come in and play (on the record). I had to work around his tour schedule, but he was able to come in. It was an inspiring day. He's just a regular guy, even though he's in Wilco. You can see how hard he works. He was as nice as can be and super focused, "Whatever you want, Laura. We're here to make this song great." It was fun to have him come in and play.

GS: I always find it interesting when songwriters cover other people's songs as you did with "Paper Moon," and the way you incorporated "See Ya Later, Alligator," on In A Heartbeat.

LD: Usually, it's a song I remember from my childhood. On my first record, I did "Raindrops Keep Falling On My Head." That was one of the first songs I remember my mom singing in the kitchen and dancing around to that song when I was four or five years old. On my second record, I covered "Sing" by the Carpenters, from the same era of music. "Paper Moon" was one I learned in seventh grade chorus. We did all these songs from the ‘20s and ‘30s and ‘40s. I later learned it on guitar in college. It's a song that always stuck with me. I would play it if there were grandparents around. "See Ya Later, Alligator," I was at Millennium Park last summer to see the Chicago Theater Revue, where they did little snippets of shows coming up in the fall. I heard a snippet of the song on stage and I thought it would make a cute kids' song.

GS: Since 2012, as the early childhood music specialist, you have been teaching at the Early Childhood Center of Wilmette, at the Wilmette Park District. What do you like best about teaching?

LD: It's a music sing-along class for preschoolers. I come in and share a lot of my original songs and we do a lot of traditional music too. There's a lot of movement and rhyming and we memorize songs. All the stuff you learn in preschool. I like it because it's a more intimate group. You are down on the floor with the kids. You get to know them better. I love hearing the kids' responses. I love that age group; three, four, five and six is like my favorite age group. Overall what I love about doing music for kids is that they are so spontaneous. They are so in the moment. They are right there with you. They instantly start singing and dancing. Kids love music. It's fun and rewarding. My favorite thing is when we're in a Wiggleworms class and some parent is singing really loud and off-key. I love that because it doesn't matter [laughs]. I always tell parents, "Your baby loves your voice. It's not about how perfect you are singing; it's that you are singing and enjoying music with your kid."

GS: Laura, do you get many LGBT parents coming to your shows?

LD: Yes, I do. I do have a fair amount. I recently played a CD release show. There was a family with two moms and little kids. I did a Kickstarter (fundraising campaign) for this record and they were big supporters of that. Their reward was that they got to come (to the show) early and take a photo with the band onstage. I would say I have a fair amount of LGBT fans. I'm gay myself and I have a lot of women friends with small children. I'm out and proud and all that stuff. The chorus to the title song on my second record, Shining Like A Star, goes "Do the things that make you who you are/be yourself and you'll be shining like a star." (With) that line, I think I was thinking of myself. I think that song came from my struggle with coming out. It took me a long time to come out, actually. (The message is) if you're yourself you'll be a star.