What is so great about River North is that they are physically incredibly strong. 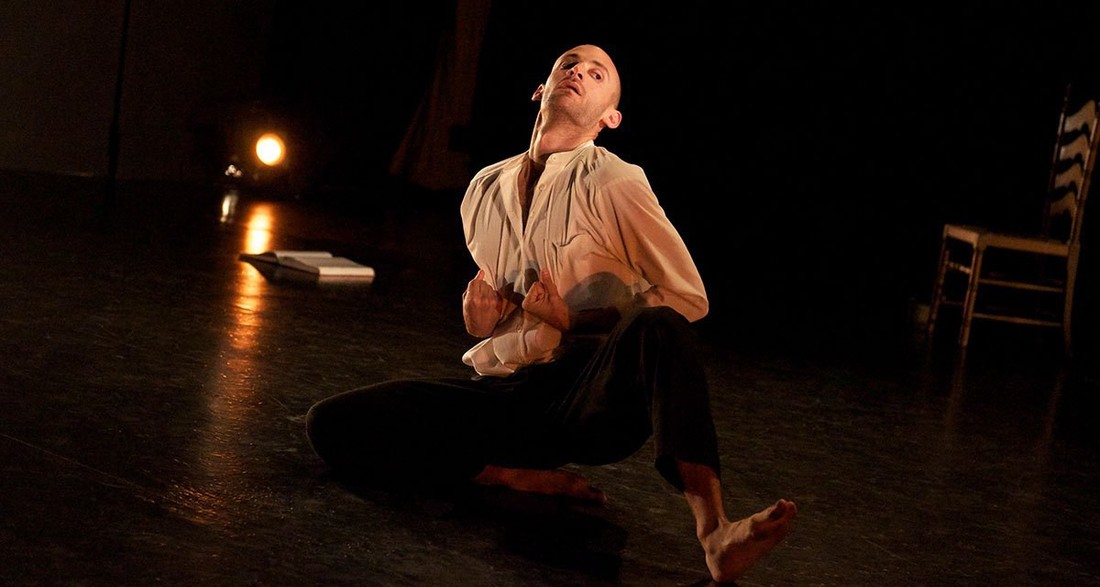 Out choreographer puts poetry in motion

Guest choreographer Adam Barruch is returning to Chicago and River North Dance Chicago this month with a whole new bag of tricks. This out and proud artist uses collaborator's Roarke Menzies' music transforming it into a piece called “the frost that binds.”

Barruch hails from New York, growing up on Broadway eventually lead into a career in dance. He combines his life lessons into art to this day.Nunn met up with the talented performer before his upcoming show at River North Dance Chicago.

AB: (Adam Barruch) Yes, I am. I was born in New York City. I was raised up in the suburbs. I went to high school and college in the city. I started as a child actor so I was working in the city when I was young.

AB: I didn't. It was the opposite. I was pushing my parents so I could do it. I got my first big gig when I was 11.

AB: It was A Christmas Carol at Madison Square Gardens. I did that for two years.

JN: That's a lot of people.

AB: Yes, it was at the Paramount Theatre, now called The Theater at Madison Square Garden. It was great to do it back then because I wasn't afraid of anything.

JN: When did you come out of the closet as a performer?

AB: I came out when I was 18. I was out to my friends but not to my parents before that. Although they should have figured it out!

JN: You went to Juilliard?

JN: How intense was that?

AB: Very. I learned a lot. It was a chance to meet very beautiful artists and people that inspired me to challenge myself both in the faculty and the student body. Many of them are still my fear friends today.

JN: When did you start dancing?

AB: When I was 11 years old. I did jazz when I was in high school where I decided to stop working as an actor. I wanted the classical training in dance so I went to LaGuardia High School. There I began ballet and modern every day.

JN: You are still performing in Montreal?

AB: I perform in New York and Montreal. When I am in New York I mostly focus on creating and performing in my own work. When I am in Montreal I dance for a company up there. It is a great chance for me to leave my role as a choreographer and go to be a dancer for someone else. I learn new information so I can bring it back to process.

JN: I would like to go for gay Pride there.

AB: Montreal is great. Go in the summer, it's better. It gets quite cold up there.

AB: I just went to Toronto for the first time on tour. I was there a month ago. There was a Basquiat exhibit there that was cool.

JN: Is it true that male dancers tend to have a longer shelf life when performing?

AB: I think being a male dancer in some ways there are more opportunities. I guess that adds to the longevity of performing because there are not as many. It is much harder for female dancers to get work and maintain a career.

JN: Is this your second time working with River North Dance Chicago?

AB: This is my third time. I feel very lucky to have worked with them three times. Each time has been a milestone. The first I worked with them was the first time I made a piece for a professional company outside of my own work. The second time I set a solo to “The Worst Pies in London.” Before that I had only performed it myself and not taught it to anybody. It was a challenge to see if I could teach a language that was really intrinsic to me to someone else. This time it feels like a culmination of all of my times working with them.

I do have to say that they understand every component of my work better than any group I have worked with.

JN: It must be tricky to communicate your work with a big group.

AB: Yes, it is interesting that each group I work with each one has their own inherent strengths. What is so great about River North is that they are physically incredibly strong. They have an amazing technical prowess. They are emotionally open and are human when they dance. My work is extremely evocative and emotional. Them understanding the physicality of that is very special for me. Now that it is my second time setting a full work the process is very smooth. They know a lot about what I do already so I don't have to teach them as much.

JN: Why is your piece “the frost that binds” all in lower case?

AB: It is because I excerpted it from Percy Bysshe Shelley poem. I slightly changed the wording. It is an analogy for the death of John Keats. The quote I took is “thaw not the frost which binds”, which is referring to tears not thawing a frost or the death that is attached to this man's head. I liked the wording because I look at the body as a microcosm relating to the bigger picture. We have become as humans more emotionally frozen as we get more dependent on our technological equipment. I feel like our interpersonal relationships are suffering because of that. On the opposite end the climate of the planet seems to be destabilizing and becoming more erratic. I like the idea that one is binding the other one is dispersing.

I think death makes us human and one thing we all share. It's universal. I like the quote because the frost is our destruction and also our salvation.

JN: What music are you using?

AB: The music is composed by a dear friend of mine, Roarke Menzies. He's a Brooklyn based artist who is an incredible talent. I have worked with him on several collaborations before. He's a master of sound and texture. Everything is processed into a computer and he filters things. For example he might vocalize into a microphone and take that sound, process it through a filter, then stretch it out over a long time at the computer where it can't figure it out so there will be gaps in the sound. It creates skips and glitches. He's a magician in the studio.

JN: What comes first the music or the dance?

AB: Usually I go to him first and tell him I have a commission. I tell him my idea of what I am thinking about. We then play in the studio. We go back and forth until it is a full score.

JN: So the dance is influenced by the music?

AB: Yes. I like to to have the music before I come to make a piece because then I understand the sonic environment. That really informs the world of which the dance takes place. I always come in with movement phrases then I teach it to the dancers so that we are all on the same page. I have many collaborative prompts so that they take the material and morph it into new material. We create a language that is between myself and them. You can generate a lot of material very fast that way when we are all working together.

As an outside eye I can keep them on the right path. I sit back and help them find the language that I like.

JN: I could see this playing well at venues like the MCA.

AB: I performed there at the museum this past summer for the Chicago Dancing Festival. It is a great stage. I loved it there. I just bought a t-shirt from the gift shop actually.

JN: How was winning the Lotus Foundation Prize?

AB: I was nominated by Lar Lubovitch who runs the Chicago Dancing Festival. It was wonderful. I received some money to fund a project that I was working on. That just premiered in New York. The piece was called Belladonna. It was a duet for me and longtime collaborator Chelsea Bonosky. It was based on Rappaccini's Daughter by Nathaniel Hawthorne.

JN: Have you met Baryshnikov?

JN: This September you working with a dance troupe in Santa Barbara?

AB: Yes, I have residency in Santa Barbara at the Lobero Theater. I get to work on anything I want to work on with dancers of my choosing. I am starting a physical theater production of Sweeney Todd. I did get to meet Stephen Sondheim recently to ask him a few questions.

JN: What did you ask him?

AB: I asked him about his process in writing that show.

JN: I'm sure it was hard for him to remember.

AB: It was exactly like that! He was so generous to take time out for me. Someone sent him a video of my “Worst Pies in London” solo and he reacted surprisingly really well to it. He has been very supportive. It was amazing to hear him speak. He has been in my life since about eight years old!

Chill out with Adam Barruch's new work at Auditorium Theatre, 50 E. Congress Pkwy, on Saturday, March 28 at 7:30 p.m. Tickets are available at AuditoriumTheatre.org or by calling 800-982-ARTS. Follow Barruch's dancing feet at www.adambarruch.com.