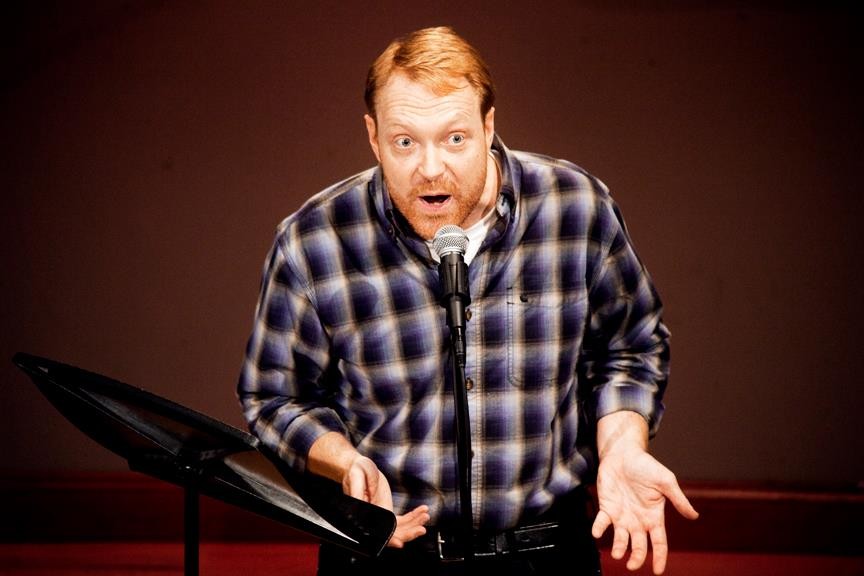 The hot storytelling show sells out its monthly residencies in NYC and in LA and travels the country to showcase national talent.  Risk was also featured in Rolling Stone's "Best Comedy Podcasts", named the #1 Don't-Miss Live Podcast by TIme Out LA, Top 10 NYC Podcast  by Time Out New York and hailed as  "always entertaining" by The New York Times. To ask Kevin Allison what Chicago can expect at the upcoming show, Chicago writer and comedian Adam Guerino asks him a few questions.

AG: (Adam Guerino) When and how did you get started with comedy?

KA: (Kevin Allison) I joined The State, the sketch comedy group, when we were all at NYU from 88 to 92. We landed a series on MTV shortly after graduating. One of the characters I played was in a sketch making fun of stereotypes called The Jew, the Italian and the Redhead Gay. People still see me in the street sometimes and shout, "Oh my gosh, it's the Redhead Gay!"

AG: How would you explain Risk to a stranger?

KA: The show where people tell true stories they never thought they'd dare to share in public. Fans always say, "I can't believe they went there!" It's like The Moth or This American Life, but it's completely uncensored and nothing is "inappropriate." Some of the stories are from our live shows and some are radio-style pieces. But an evening of Risk or an episode of the audio podcast is always a mixture of jaw-droppingly hilarious, heartbreaking, horrifying stuff. It's always a cathartic and emotional roller coaster ride.

AG: Is Risk intentionally different than what you've done before or was it more of an organic approach?

KS: After The State broke up, I started telling stories on stage as crazy, kooky characters. Finally, in 2008, Michael Ian Black, another member of The State, told me, "I think the audience wants you to drop the act and start telling your own stories." I said, "Oh no. Hollywood would blacklist me. I'm too gay, too kinky, too friendly and mid-Western... Too many things that seem odd together. It's too risky." He said, "There you go. If it's risky, people will wanna hear it." So I followed the fear, as they say.

AG: What do you look for when picking storytellers for your show?

KA: I'm hoping it will be something we haven't heard before and that it will be something the storyteller was really emotionally wound up about. A time they really found themselves outside the comfort zone or completely blindsided. If it's clear the person feels like it's really ballsy to be revealing what they're talking about, it's going to be interesting.

AG: Do you ever find yourself changing what story you were going to tell after hearing what the rest of the storytellers proposed?

AG: You’ve been on TV as well as played for live audiences, how does your storytelling style change from a live show versus a television audience?

KA: On stage, there's an energy that's infectious. When the crowd hears how honest the storytellers are being, they lean forward and hang on every word. Every now and then, a storyteller will start laughing or crying and become a bit overwhelmed, but we're all behind them anyway. When stories are done radio-style for the show, a person is sitting with me in my apartment. So there's often a level of quiet intimacy that can be achieved there where even more nuanced revelations can occur.

AG: Any discoveries on tour so far? Maybe some stories do better on one coast than another?

KA: San Francisco has no end of kinky stories. Down south in places like Charleston or Chapel Hill, people have an almost literary sense of atmosphere and detail. In London, the whole concept of the show seemed totally titillating to everyone, like they were exhaling for the first time.

Adam is a writer, producer and comedian based in Chicago. He is the creator of Outloud Chicago and produces and hosts monthly the parties All Geeks and Queer Comedy. He also co-produces Piss & Vinegar Comedy. For more information, visit his website or follow him on Instagram @adamguerino.