The biggest surprise was discovering all of the racial divisions that existed not only within the LGBT community but even as specifically within the various grassroots LGBT activist organizations. 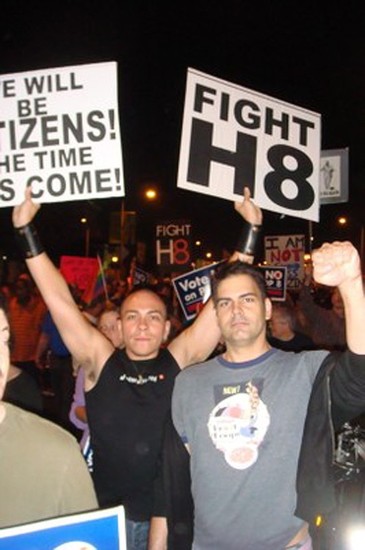 Charlie Gage on "Inspired: The Voices Against Prop 8"; screens in Chicago 2/25

In 2008, after being swept up in the wave of protests and rallies following the passage of California's Proposition 8, Charlie Gage joined long time friend Ian McIntosh to produce and direct his first full length feature documentary "Inspired: The Voices Against Prop 8."

"Inspired" is a documentary film chronicling several people's lives in the wake of the passage of Prop 8. Arresting live footage follows average people from all walks of life, inspired to action in ways they never dreamed. Experience the passionate rallies and defiant marches of the new gay rights movement as it swept through Southern California. Intimate interviews reveal all the ways the movement comes together, and the subtle and not-so-subtle ways it can be pulled apart from within.

A former Chicagoan now living in Los Angeles, Gage returns to his hometown at the end of February where his documentary "Inspired" will be screened during the Peace On Earth Film Festival which is dedicating its Saturday night to lgbt pride and equality.

ChicagoPride.com took a moment to chat with the talented director.

MI: (Matt Inawat with GoPride.com) The passage of Prop 8 triggered an emotional response in so many people in 2008. In the film "Inspired: The Voices Against Prop 8," you document the movement that transpired when this law eliminated marriage equality in California. What "inspired" you to create this documentary?

CG: (Charlie Gage) My creation of this documentary is really a story of my own personal inspiration.

The night after the election in 2008 when Prop 8 passed there was a big rally planned in West Hollywood, the biggest gay neighborhood in Los Angeles. Ironically at the time I was dead set against the rally. I even wrote an email to my friends saying how I thought the idea of a LGBT community rallying in the middle of the gay neighborhood where no one else could see us was pointless. But as it turned out I had an out of town friend visiting that night who talked me into going to the rally after all. This turned out to be the rally where thousands of people showed up and broke away from West Hollywood and marched all over Hollywood shutting down the streets and making it the top news story.

After that I swept into the protest movement. I went to as many rallies and marches as I could, and I filmed everything—but I only filmed things as something to do. At the time I never intended on making a documentary. It wasn't until after the 8th rally my best friend/co-producer Ian McIntosh watched my footage and said we needed to do something with this footage. After that we set out to basically Facebook stalk the people we saw in our footage and ask around for people who, like us, were never really activist before but now took to the streets.

MI: What was your greatest challenge in putting this project together?

CG: The greatest challenge was narrowing down the story to something we could tell in 90 minutes. Prop 8 is so deeply connected with so many other issues beyond marriage equality such as everything from the California political process to the national story relating to other states and the Defense of Marriage Act (DOMA). There were and still are so many stories that can be told connecting to this issue we very much struggled in choosing a direction to focus. We didn't want to tell a point-by-point political story. We didn't want to get deep into the religious issues, the film "8: The Mormon Proposition" did an excellent job with that issue.

Eventually we decided we wanted to make what we called the "Prop 8 film not about Prop 8." We chose to tell a very intimate small story of people just in one area and how this issue woke them up politically and make them activists.

MI: Documentarians usually learn a lot about the people they film and interview - and many say their lives have been forever changed because of it. As you were collecting interviews from diverse people, were there any comments that affected you personally?

CG: The biggest surprise was discovering all of the racial divisions that existed not only within the LGBT community but even as specifically within the various grassroots LGBT activist organizations.

It's very easy in passing to think of the gay community as another minority and that all people within that minority more or less get along. But the unique thing about being gay, lesbian or bisexual - unlike a racial minority - is that gay people exist within every other community of people. It seems so obvious when you take a second to think about it that just because someone realizes they are gay or lesbian that really has no relation to whether they're racist.

MI: What do you hope to accomplish with the film?

CG: We want to show personal stories behind the headlines and sound bites related to Prop 8 and the fight for marriage equality. Maybe people have said that once people who are opposed to same sex marriage actually sit down and talk with someone from our side and hear their personal story they tend to change their views. So that is definitely a goal.

We sort of see this as our own version of a protest rally and march. But also on a more, I guess, selfish level is we want to show the world that this time normally image obsessed arguable shallow Los Angeles jumped to forefront this time.

MI: Which film festivals have screened the film? Are there any upcoming dates and cities we should know about?

CG: The Peace on Earth Film Festival [in Chicago] will be our seventh festival. So far it has screened at the following:

MI: As the film screens at more and more film festivals, what kind of feedback are you getting from the viewers?

CG: Currently we have applied to many film festivals between now and the Summer, and we are simply waiting to hear back. So far, though, at the festivals no one really asks us the typical film festivals questions about how long it took to shoot or what type of camera, but instead everyone asks us questions about what is happening now with Prop 8 and marriage equality in California and on a national scope.

At the Long Beach Q Film Fest the audience even began a debate on how same-sex married couples would have to file their taxes! It really has been keeping me on my toes about this issue. It's actually inspired me to continue being politically active long after the INSPIRED DVD is on the shelves.

MI: Have you heard back from any viewers who have recently been inspired to join the movement - or folks who've never really thought about Prop 8 until the film just "hit them"?

CG: People always say to us, "wow I had no idea so much went on! I didn't realize it was such a big issue that affected so many people." Also what we have heard is that it re-ignited people.

It's been over three years since those protests and people have become somewhat comfortable. They tell us it brings back all those feelings from that time and reminds them there is still work to do.

MI: You'll be visiting Chicago in a few weeks when "Inspired" is screened at the Peace On Earth Film Festival. Growing up in Chicago, what are some of the fondest memories you have of the Windy City?

CG: Mostly I remember my family. I have a big family and most all of them are in or near the city. So I am incredibly happy to be able to bring this film that I am so proud of to my home town to show all of my many aunts, uncles, cousins, even my parents will be seeing it for the first time on the big screen!

Plus our Executive Producer & cast member Tim Lykowski is also from Chicago and his family will all be there too. This is a very exciting event for all of us!

Oh and also I have to mention the snow! I have been back to Illinois many times since I moved away, but never in the dead of winter. So I have my gloves and scarves ready! You really can't layer in Los Angeles like you can in Chicago.

MI: Charlie, thanks for spending time with us to talk about the documentary! See you in a couple weeks!

"Inspired: the Voices Against Prop 8" will be screening at the Chicago Cultural Center on Saturday, February 25th at the Peace on Earth Film Festival (event details).

In addition to "Inspired," the award winning documentary "Hollywood to Dollywood" will be shown immediately following. The GoPride Network interviewed gay twin directors Gary and Larry Lane this past fall.

More information can be found on the festival website at http://peaceonearthfilmfestival.org