Something special: an interview with Colman Domingo

It’s interesting to do something that you’re a little afraid of sometimes. There are some very sensual scenes in there. I’ve never portrayed that on film. 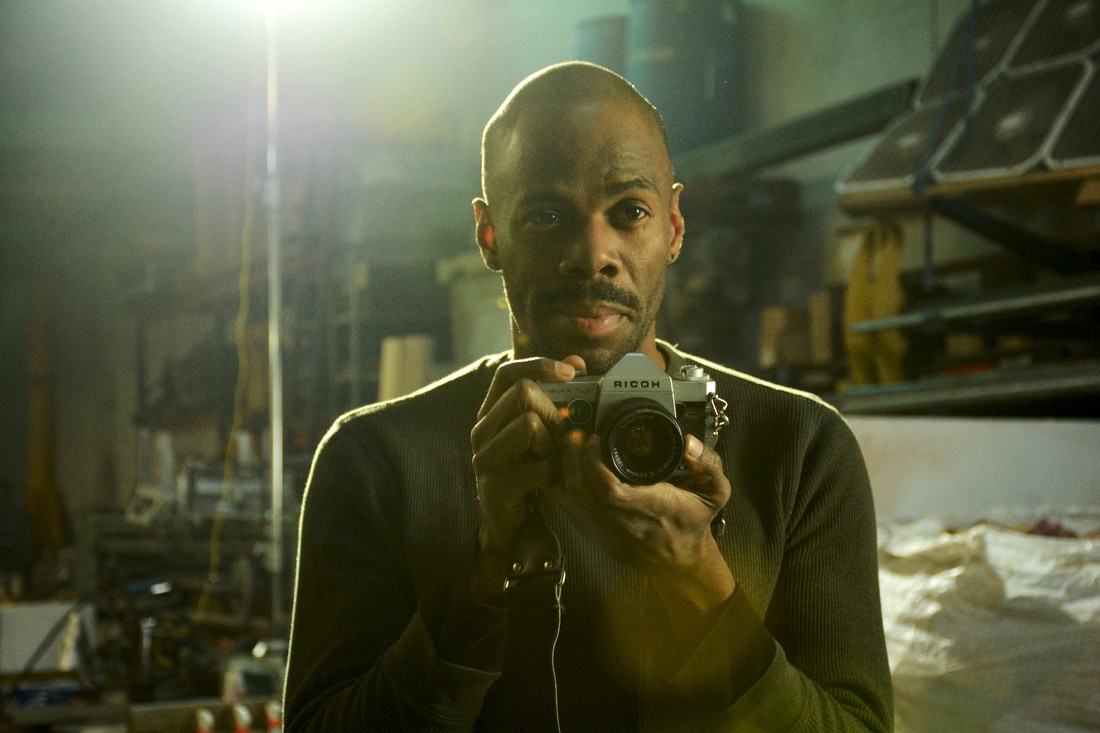 Beautiful Something is a 21st century variation on La Ronde set in Philadelphia. Tortured poet Brian (Brian Sheppard) is obsessed with straight Dan (Grant Lancaster), with whom he had a brief relationship, thereby becoming the inspiration for Brian’s award-winning book of poems. Young Jim (Zach Ryan), lover and muse to world-famous sculptor Drew (Colman Domingo), wants to break away from what he perceives as Drew’s smothering attention. Brian and Jim take to the streets to find love, cross paths with others on the same mission, even momentarily ending up with each other. In late June, I spoke with Colman Domingo about his role in Beautiful Something, as well as about his acting career on stage, on TV and in film. [Beautiful Something screens at Outfest at 9:30 p.m., July 16, at the DGA Theater Complex in Los Angeles.]

Gregg Shapiro: Colman, you portrayed Ralph Abernathy in Ava DuVernay’s Oscar-nominated film Selma. What was that experience like for you?

Colman Domingo: It really felt like I was doing a film with family. I think people could see that we became like a family on that set. We were united as one, on a mission, in a way, larger than just being an actor. We felt like we were coming together to try and give these human stories of these iconic leaders. Taking them out of history books and speeches and showing who they are as human beings. How they laughed, how they ate, how they took out the garbage and how they related to one another; the idea that they were ordinary people doing extraordinary things. The message of film is that everyone has the power to stand up for rights and for one another. We were very close. We’re still close. We call and text each other. I’m sure I hear from at least one of my cast members at least twice a week. It came from the top. That’s the way Ava set up the room and the film. She embraced each actor every day before we started shooting and she embraced us before we left. There was a lot of love. Any time that we had off we were together, as well. Whether we were having dinners or Ava was hosting us at her apartment. We had a great time. It was such a significant moment, not only in my career, but also in my life. I knew it, too. I was actually slated to do my solo show at a theater in Philadelphia and this film came up. I was so committed to do my own show in Philadelphia, in my hometown. It would have been my first time ever performing in my hometown since I’ve been acting for 25 years. The way this film came through – it was one of those challenges where you’re like, “Wow! I have to do it! I have to change everything.” I hoped and begged the theater to go along with me. I understood it was a very uncomfortable situation, but I had to do it. I look back now and I think, “Thank God I followed my gut instinct.”

GS: You made the right decision. As a gay man, I was glad that Bayard Rustin wasn’t erased from the story.

GS: If there was a biopic about Rustin’s life, what would it mean to you to portray him onscreen?

CD: You know what? I would love to. I’ve actually had the opportunity to portray Bayard Rustin in a play called Civil Sex by Brian Freeman at The Marsh Theatre in San Francisco in the late `90s. I’ve had the opportunity to research him and understand him and get to know him in such a deep way. I would be so honored to portray him on film. We have such a kinship, both being raised in the Philadelphia area, our life experiences, what we’re interested in. He was an epic pioneer.

GS: I’m glad you mentioned theater, because you are also known as a stage actor, winning multiple awards and accolades for your theater work. How does acting for the stage differ from acting for the screen for you?

CD: I tell my students that the only difference is intimacy. It’s all the same work. It’s all the same detail and research that goes into it. The only difference is onstage I want to make sure that 1200 people in that Broadway house all understand and know what I’m doing when it comes to the way I speak, where my voice is placed, gestures, you name it. For film and television, it’s much more intimate. It’s about letting it be as intimate as possible and letting the camera be a fly on the wall. The bulk of my work has been in theater, but I have a new love for film and TV. It’s a very technical skill that you must learn as well. It’s amazing what the camera picks up. I’m very curious about it, it’s cool.

GS: Thank you for mentioning TV, because you are perhaps best known to your queer fans when you were an ensemble member of Logo’s Big Gay Sketch Show.

CD: I had more fun in the second season. The first season I didn’t understand – because I come from the theater and I was working with a bunch of comedians. The comedians understand that you have to sell that work, snatch it and jerk that moment. I was coming from this place of generosity (as a stage actor). It was kind of dog-eat-dog. But it makes you learn to become a bit more ferocious about getting your sketch in, getting your character in, know that that’s what those table reads are for and how it’s designed. It does help you hone a new skill. I did have a good time. The first season I was on, I felt like I was playing a lot of catch-up and trying to figure it out. On the second (and final) season, I started to have a great time.

GS: Did you ever hear from Maya Angelou about your impression of her on the show?

CD: I never did. It’s funny, because I wondered at times. My friend (filmmaker) Lee Daniels called me one day and said, “Oh, my gosh, Colman I never knew that you portrayed Oprah. Does she know?” I said, “I don’t know. I feel so shy. I didn’t write the sketches, but I feel like she may have seen it.” People are very aware of what’s happening when they’re public figures. I have a feeling Maya Angelou probably saw it and had a good laugh [laughs]. I think the same with Oprah [laughs].

GS: What was it about the character of sculptor Drew in Beautiful Something that made you want to portray him in the movie?

CD: Joseph Graham, the director, is such a kind and generous human being. The way he described what he was planning to do – a lot of times I can get on board with something by having a fellow artist tell me what they’re interested in. Whether they’re going to succeed or not isn’t important to me. It’s “This is what I’m interested in doing.” You want to tell these dynamic stories about our experiences that are multi-dimensional. I loved the fact that it was multi-cultural. It was one long night in Philadelphia with people just trying to figure it out. Our experiences are no different than other experiences. It’s just people trying to work out their dynamic. The idea of this sculptor who objectifies this young guy; I understand this point of view being an artist. Sometimes that can be all encompassing. I’ve had some moments when friends have questioned me because I forget their birthdays. If I’m in a play or I’m rehearsing, I’m completely there. There is no other world. There’s a balance one must strike and I think Drew is trying to figure that out as well. I understand the character. I was a little afraid of him, as well. It’s interesting to do something that you’re a little afraid of sometimes. There are some very sensual scenes in there. I’ve never portrayed that on film.

CD: I just had to trust my director and my fellow actor. The guy who plays Jim is straight and I’m gay. These are what the characters are and let’s get out of the way and help tell the story we need to tell. Whatever it is about our own proclivities – I’m a married man and I have a partner for ten years, he’s (Zach) a straight man – that has nothing to do with these two characters. It was in a safe environment where we could be as erotic with each other as we needed to be and to take care of each other. It felt safe, thrilling, passionate and it felt generous.

GS: Beautiful Something is set in Philadelphia, and as you mentioned you are a Philly native.

CD: It was the first thing I’d ever done in my hometown. It was cool. We were filming in South Philly, in these warehouses and homes. I love how he (Graham) was trying to get a sense of the people of Philadelphia, too. I asked him, “Why Philadelphia?” He said that he had visited there and he thought the people were cool and down to earth and raw and gritty. That makes sense to me. The city itself became a character as well.

GS: The older character of Bob tells Jim that his generation has it made, what with gay marriage and all. You and I are speaking on a very momentous day, the SCOTUS same sex marriage decision.

CD: In the film, I think those arguments are so valid. I’m 45 years old and I came into my sexuality at the height of the AIDS epidemic and I remember me and my friends trying to navigate our way as gay men, trying to figure it out, what our choices were and what we could do to stay healthy and stay negative and how we could support our community in every facet. We’ve been finding ourselves and reinventing who we are. The film is like a conversation about generations. Talking to you today, on this monumental day, that foundation was laid, as we know, by so many others. By men and women in the 1930s, 1940s and 1950s with small steps, by being subversive, from the Stonewall riots to today. We didn’t just do this! It didn’t happen because we struck down DOMA three years ago. This is the work of many people. That’s what I love about Beautiful Something. That’s what that conversation is with Bob. So this young boy, who’s kind of lost, can begin to investigate and find out where he fits.

GS: Finally, Colman, have you started working on or thinking about your next project?

CD: I am, actually. I’m working on a few things. I’m working on a musical about the life of Donna Summer. I have another (original) play titled Dot about a matriarch who has dementia, which deals with her family, and is happening in New York in February. I just finished the Nate Parker film The Birth of a Nation about a week ago. It’s about Nat Turner and I play a character named Hark who is like a brother to Nat.