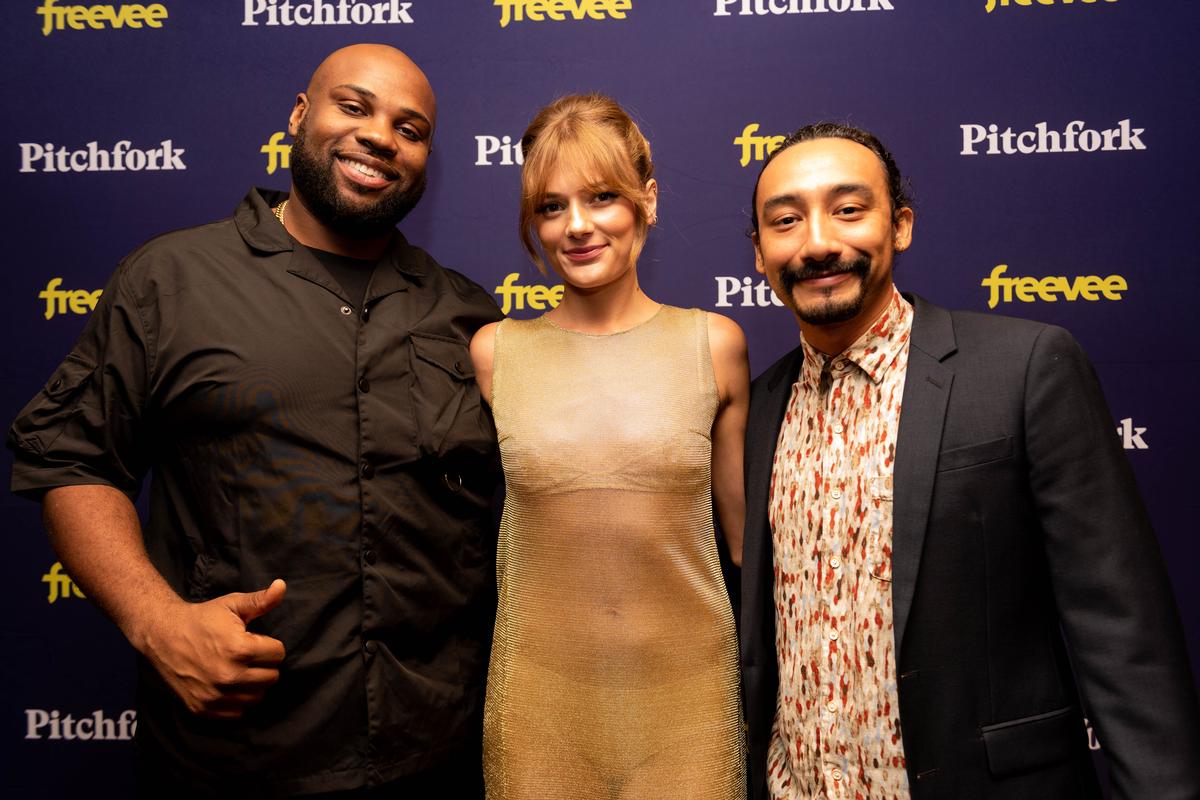 Sprung is a hilarious new comedy streaming on Amazon’s Freevee network beginning August 19. Many will know the creator of show Greg Garcia from his past television work of My Name Is Earl and Raising Hope.

The show stars Martha Plimpton as Barb, Garret Dillahunt as Jack and Shakira Barrera as Gloria. The plot centers around a group of incarcerated people who are set free during the COVID pandemic. Jack and Gloria shack up with Barb thanks to her son Rooster played by Phillip Garcia. Clare Gillies is Wiggles the ex of Rooster with a new boyfriend named Melvin portrayed by James Earl.

Before an early screening at The Logan Theatre in Chicago, Garcia, Gillies and Earl sat down to discuss Sprung.

JN: (Jerry Nunn) I watched all of the season of Sprung this week.

PG: (Phillip Garcia) I am jealous.

JN: Let me tell you, it gets really good! [all laugh] Talk about your individual characters.

PG: I play Rooster. I am Jack’s cellmate and not the sharpest tool in the shed. He has a heart of gold though. He’s definitely a mama’s boy and a hopeless romantic.

Even though he is not super bright and intelligent, he usually comes around and people want him on their team by the end.

JN: Rooster is a lovable guy.

PG: Yes, he is. I’m excited for people to finally see him!

CG: (Clare Gillies) I play Wiggles. I am Melvin’s girlfriend and Rooster’s ex-girlfriend, maybe the love of his life. I will say that!

Wiggles is simple and a sleeper. She adds value to the team, but they don’t know that until the end.

JE: (James Earl) I play Melvin. He is the weed-smoking douchebag who is taking advantage of the lockdown during COVID. He is storing all the toilet paper. He is trying to scam and make money off of this whole pandemic situation.

He is in love with Wiggles and the hustler of the city.

JN: You three are the love trio right in this room.

JN: How were you all cast on Sprung?

PG: Like any other thing, we auditioned for it.

JN: Did you send in videos?

PG: We self-tape now. I don’t remember the last time I went into an actual face-to-face audition.  We sent in recordings. I originally auditioned for Melvin’s role, but it wasn’t called Melvin before.

JE: We had to change his name. His name was originally Rusty.

PG: I remember auditioning for it and I had gold fronts or grills on my teeth. They called me back and said I wasn’t right for the role, but asked me to come back for Rooster. They wanted someone a little more sweet for that part. So I did it!

This is my wife sitting beside me, by the way...

PG: This was one of my auditions where my agent sent it to me super last minute. I didn’t really want to do the role and was just tired. It turned out really well.

CG: It was the same thing for me. The tape was unsolicited. My manager got the breakdown and decided that we should send in a sneak tape and risk it. With the name Wiggles, it couldn’t have been more perfect for me.

JE: I also auditioned for Rooster originally. A couple of months went by and they sent me the lines for Rusty, which is now Melvin.

At the time I was trying to work with Taylor Sheridan and get on one of his shows. I had a phone call with him, but long story short it didn’t happen. I was bummed out.

I got a call about Sprung and had only sent in one tape. A couple of months after that they hit me up and asked me to play this role. I had totally forgotten about it!

I remember the breakdown of it because the creator Gregory Thomas Garcia didn’t want me to be funny. I was told to be serious and not play into the jokes. That is what stood out to me and I thought that was cool.

When Greg called I told him how upset I was about the Taylor Sheridan role. He said he hoped I was okay with the part of Melvin and I explained that I was trying to thank him in my own way. He saved me!

JN: Was the show able to film any of it during the actual time period it was set in?

JE: The industry was shut down at that time, but we filmed it right after.

JN: Did any of you feel it was too soon to make jokes about COVID in the series?

JE: No, I was more worried that it would come out too late. We thought the pandemic was over, but then it still went going on. We didn’t know how long it would go on for when we made it.

At the time we didn’t know if it would be three years or longer.

JN: That is part of the humor of the series of how ignorant we were in 2020.

PG: I think we need this right now, honestly.

PG: It was exciting early on because it was a half-hour comedy, but it was shot like a drama. When I found out it would be shot in Pittsburgh I was surprised. What comedies are shot in Pittsburgh? It is dreary and they shoot a lot of crime shows there with people being dragged into the lake. Sprung is written like a drama but plays like a comedy.

JN: I had lunch with Martha Plimpton at a Steppenwolf Theatre fundraiser.

JE: That is my girl!

JN: She is such a scene stealer on Sprung. Did you feel competitive with her in the room?

JE: No, we learned so much from her.

PG: I was taking notes.

PG: Martha received the script last. The rest of us had the script for a few months. She learned it really fast. She is like a bull in a China shop. She does the lines and it is amazing to watch. The choices she makes are so good now that I look back on them. She doesn’t even think about it too much and just does it.

JN: There are a couple of gay characters on the show. There is a musical part that they sing to later on the season as part of the credits.

JE: I love how Greg did the credits. He would have a character or two do a bit for the end of each episode while the credits roll. At first, I didn’t understand what he meant, but I saw the first episode where Garret jumps on the trampoline and I thought it was dope. I did one where I was high.

PG: It was a cool choice.

JE: It is different because usually during the credits people tune out, but with these credits, people will tune in.

CG: I am always singing Bye Bye Birdie. It is always in my head. I guess I just love Ann-Margret!

PG: I like newer musicals like the latest version of West Side Story and In the Heights.

JE: I didn’t like Steven Spielberg’s West Side Story.

CG: What? The new West Side Story was breathtaking! I was crying…

PG: I thought it was beautifully done.

JN: When I was at the Critics Choice Awards this year I went up to this pretty girl in a red dress and I thought it was Rachel Zegler. I asked for a picture so we took one then I realized it was Selena Gomez instead. I was so embarrassed! [all laugh]

James Earl, you were on Glee so you must have a good favorite musical.

JE: Yes, I was first introduced to musicals during Glee.

CG: Wow, what an introduction!

JE: It was so I will say any musical on Glee. Glee was just a big musical for me. I didn’t like Hamilton, but I did like the musical version of The Color Purple. What is another one?

CG: I just saw Little Shop of Horrors a couple of months ago and loved it.

JE: With a musical, I need all of the emotions. I want to cry, laugh and dance.

JN: What would you like to see in season two of Sprung?

PG: I would love to see Rooster start a cover band.

JN: Why is he named Rooster?

PG: It is because of the musical Annie. My mom calls me Roo in real life like in Winnie the Pooh. Kanga and Roo.

JN: This was all meant to be. Congrats on one of my favorite new series for 2022, Roo!

Nine episodes of Sprung will be released weekly starting August 19, 2022. Prime Video at amazon.com offers the series for free with advertisements.